What led to the protest

In China, during protests, the demonstrations’ fate is still up in the air. Due to the strong popular sentiment against China, they may lead to anti-Chinese rallies in Indonesia. The world was horrified by the demonstrations in China from November 25–27. Numerous sources claimed that rallies in and around Beijing, Beijing, Shanghai, Chengdu, and Wuhan drew thousands of participants.

Several things may be learned from this widespread demonstration. Given that the last significant demonstration in China drew troop involvement ago, it is difficult to foresee such a massive event unfolding there. These protests, however, are not limited to Beijing. Hong Kong had a three-month pro-democracy protest in 2019.

Ten people died in an arson attack in Urumqi, Xinjiang. Lockdown regulations forced residents to lock their doors from the outside. The protest’s initial goal was to get such restrictions lifted, but it ultimately led to demands for Chinese President Xi Jinping’s resignation. Protesters denounced the Chinese Communist Party (CCP), demanded democracy, and used white paper or plain white cloth as an anti-censorship sign. The protests last month, however, came after Xi’s speech to the 20th CCP on 7 October, when he said: “In replying to the sudden epidemic of Covid-19, humans put people & their lives above everything else, working to thwart this same re-emergence of matters filed from within or decided to bring from abroad, and so by persistent order to pursue of a vibrant zero-Covid policy, built national tension.”

The use of a rigorous lockdown is only one example of China’s efforts to curb the Covid-19 epidemic. The grievances expressed during recent protests, however, were the result of such attempts. Demonstrations were held showing that some individuals still dared to undermine the authority of Xi and the CCP despite the President’s party’s reappointment.

Aggravation of the protest

when Xi was re-appointed by Congress to his position as general secretary of the CCP. “We must resolutely maintain Comrade Xi’s core stance on the Central Committee as well as the Party as a whole and completely implement Xi Jinping Thinking for Socialism with Chinese Characteristics for just a New Era,” the party delegates said after that.

It will be what the Chinese government chooses to do next. After only a few days at Tiananmen Square, the CCP decided to deploy military force to clear the protesters, which resulted in the deaths of people and a large number of arrests. International sanctions were imposed as a result of all these activities, particularly those from the US & other western nations. The CCP’s handling of the demonstrations in Hong Kong did not entail live ammunition or the use of the military, in contrast to the assault on Tiananmen Square. Instead, fire hoses, tear gas, & rubber bullets were used by Hong Kong security services to disperse the demonstration. Beijing is aware that using force as it did in the past may harm Hong Kong’s status as a free environment under China’s “One Country, Two Systems” premise in light of recent developments. Sanctions will thus affect China since Hong Kong is an important commercial hub.

The Extradition Bill’s withdrawal, which is a direct demand of the protesters, is another measure to put an end to demonstrations in Hong Kong. The decision was made by the Chief Executive of Hong Kong, although it has been suggested that Beijing was responsible.

What’s next and what impact on Indonesia after the protest

Of all, it is far early to predict the outcome of the present demonstrations. Beijing will probably treat it the same way they did with the 2019 protest, even if they increase. On the other side, the CCP will lose profound appreciation from Chinese citizens if its activities result in the loss of life and harm to the economy.

Although these protests could linger for a while, Beijing is probably going to refrain from deploying military force or other forms of violence and lockdown regulations to stop the growth of negative public opinion. The Chinese government & the legitimacy of the people and hastened the pace of economic recovery by doing this.
Due mostly to the rising anti-China attitude, protests have already started in Australia & Turkey & may continue to expand to Indonesia. 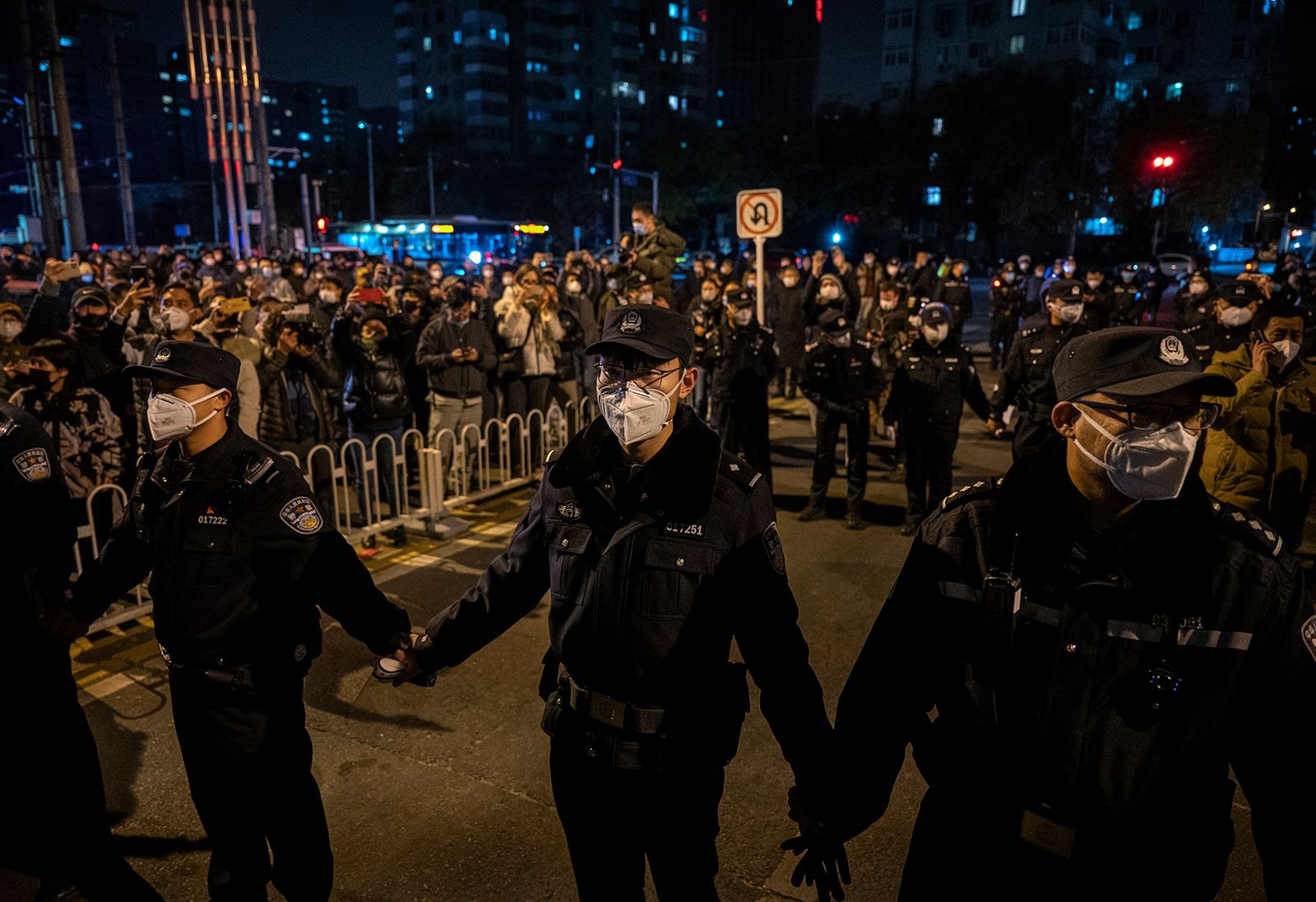 According to the Indonesian National Survey conducted in July 2022 by ISEAS-Yusof Ishak Institute, which directly questioned 1,600 different respondents about economic, local, and foreign affairs, about 25.4% of Indonesians feel that China’s rise would harm Indonesia. Conversely, just 30% of respondents think that building relations with China would be advantageous for Indonesia.

Additionally, the study revealed that only 66% of Indonesians had favorable emotions about China, down from 76.7% five years earlier. In addition, a lot of people are concerned about Indonesia’s participation in China’s Belt & Road Initiative (BRI) initiative; quite so many as 41.5% of participants agree that BRI might put other nations, including Indonesia, in a debt trap. A presumption that was perhaps influenced by things that happened in other nations, such as the development of the Port city in Sri Lanka, that led to financial losses.

Chinese relatives in Indonesia are likewise subject to unfavorable attitudes about China. According to 41% of poll participants, Chinese descendants still have loyalty to China. This re-election of Xi represents a sigh of relief for Southeast Asian nations, notably Indonesia, according to a new analysis by LAB45. The closest of China’s ASEAN allies, Indonesia, may face challenges as a result of the recent demonstrations in China.

What the Protests Tell Us About China’s Future

Thousands of people have taken to the streets in several Chinese cities in the past ten days, and many have wondered how the government would react, whether this wave of protest will have an effect on Chinese politics, & also how things will pan out in the following days. Though it is still extremely early, and making predictions might be risky, we can already start to draw some fundamental conclusions.

First, it’s crucial to keep in mind how controversial Chinese society is. Protests are commonplace now and have been for many years. These examples were noteworthy because it seemed as though a master, or parasol, frame, had inspired them. Workers, kids, angry about the provision of services & public goods, as well as at least some larger regime opponents, all developed an anti-lockdown narrative that resonated particularly powerfully in response to the horrific fire in Urumqi. The demonstrations don’t appear to have been organized, and no one appears to have been in charge of it.

A return to the private sphere of mobilization around labor negotiations, campus concerns, urban governance, as well as other worries that the government finds simpler to address and control separately by the fragility of China’s current contentious coalition and the apparent unravelling of disparate agendas. The past few days have seen high levels of mobilization maintained, not least because claims started to shift away from the more specific and concrete grievances that probably animated many at the start and toward more broad and abstract issues (such as censorship and systemic problems in politics).

Looking farther into the future, returning to a state that was more akin to normal by the end of the year would help to ease the underlying resentments that drove the current demonstrations. However, even this is not assured. Since at least 2007, Chinese politics and society have been in a protracted cycle of tightening. Even merely easing off on lockdowns and anti-Covid tactics might have unanticipated results.

Additionally, Xi Jinping has established a level of political dominance and self-control over the state of Party infrastructure that hasn’t been seen in decades. But he’s also gone about it differently than Mao or even Xiaoping. He has established something that resembles a rational-bureaucratic authoritarian society far more than the charismatic one by emphasizing rules and discipline.

However, any significant new reform would’ve been difficult since it would require appeasing or displacing strong vested interests. These would include many of the least well-off people, who would stand to lose even more, as well as those who have benefited the most from China’s present partial reform equilibrium.

Jiang Zemin was adamant that China‘s economy needed to be developed may be viewing this from the opposite perspective, contending that government systems must first be strengthened & their hold on society solidified before any more risky or systemic economy can take place. After achieving the former in large part, we may see the second in the upcoming years—though not primarily as a result of the current demonstrations.

The ecosystem around YouTube boosts India's GDP by Rs 10,000 billion.