As many as 29 antiquities, including on the themes of Lord Shiva and his disciples, Lord Vishnu and the Jain tradition, have been repatriated to India by Australia and Prime Minister Narendra Modi has thanked his Australian counterpart Scott Morrison for returning them, the government said on Monday.

Modi also inspected the antiquities that are from different time periods, with the earliest dating to 9-10 century CE.

Modi held a virtual summit with the Australian prime minister on Monday and thanked him for taking the initiative to return the antiquities. “I would like to especially thank you for taking the initiative to return ancient Indian antiquities. Among them are hundreds of years old idols and pictures that were illegally taken from Rajasthan, West Bengal, Gujarat, Himachal Pradesh and other Indian states,” the Prime Minister’s Office (PMO) said in a tweet quoting Modi.

The Press Information Bureau (PIB), in a tweet, said the antiquities range in six broad categories as per themes: Shiva and his disciples, worshipping Shakti, Lord Vishnu and his forms, Jain tradition, portraits and decorative objects.

The antiquities are primarily sculptures and paintings executed in a variety of materials – sandstone, marble, bronze, brass and paper, sources said. The Archeological Survey of India said since 2014, 228 antiquities have been returned to India. 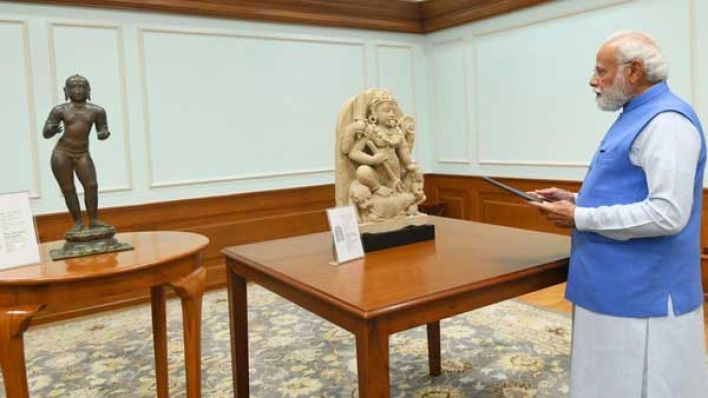