Nirav Modi, the fugitive diamond merchant, is perhaps counting the days until he arrives in India. In the latest setback, a London court on Wednesday rejected an appeal from Nirav Modi against his extradition from the United Kingdom to India to face fraud and money laundering charges.

In 2019, the British police arrested Nirav Modi in London regarding his alleged involvement in a bank fraud in India worth $2 billion.

However, London’s High Court dismissed the appeal on Wednesday, quashing Modi’s lawyer’s appeal saying Modi’s risk of suicide does not rule out his extradition. The 51-year-old fugitive diamond merchant still has the option of further appeals in the UK and European courts, and thus the process to bring him back to India and stand trial is going to take a lot of work.

One of the two judges, Justice Jeremy Stuart- Smith said that they were “far from satisfied that Mr Modi’s mental condition and the risk of suicide are such that it would be either unjust or oppressive to extradite him,” according to the court ruling.

“On the basis of the assurances that the (Indian government) has given, we accept that there will be suitable medical provision and an appropriate plan in place for the management and medical care of Mr Modi, which will be provided in the knowledge that he is a suicide risk,” the judges said.

The lawyers of Nirav Modi are now relying on his mental state to stop his extradition. They argue that Modi’s mental state is not strong enough to handle the burden of an extradition process to Indian facilities as they are not good enough to treat his mind.

Nirav Modi indeed has a family history of mental trauma where his mother committed suicide. Modi’s lawyer relied on this vital information about his family history of suicide and pleaded about the extreme depression and high risk of suicide Modi if he is deported back to India. Modi’s alleged fraud first came to light in 2018 when Punjab National Bank, one of India’s largest banks, reported fraudulent activity at one of its branches.

Punjab National Bank (PNB), in a complaint to the police authorities, said that two of its staff members, in complicity with Nirav Modi & Mehul Choksi, had cheated the bank for roughly two billion dollars.

PNB went ahead and declared a fraud of Rs. 11,400 crores. The foreign branches of Indian overseas banks also reported that Nirav Modi and his firm were being credited money via unapproved banking ways by PNB staff in the ways granting unsecured & unauthorized Letters of Undertakings (LoUs).

CBI started its investigation of around 20 retail stores of Choksi’s Gitanjali Group after the complaint was filed against Mehul Choksi.

PNB published an optimistic statement about expecting the recovery of loss within a period of six months.

However, the credit exposure to the Nirav Modi fraud of different banks came out from the risk exposure data.

The Reserve Bank of India then stated the need for tight supervisory and regulatory actions.

The CBI issued arrest warrants against the two corrupt employees of PNB, along with Nirav Modi’s group executives, who were found involved in the scam. The Enforcement Directorate (ED) ordered a seizure of diamonds, gold, and jewellery items from the home, shops and offices of Nirav Modi, worth Rs.56.74 billion (approx). 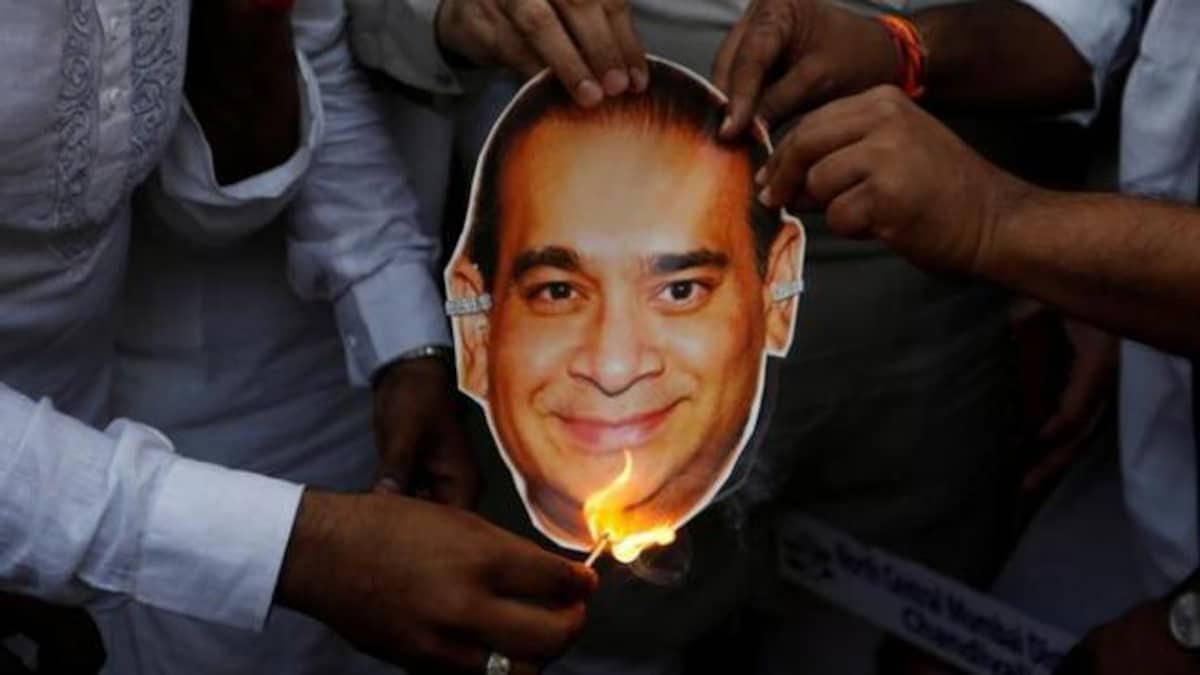 The share prices of PNB tanked because of the massive fear and volatility caused by the scam, and they lost thousands of crores in market capitalization. The then Finance Minister, Late Arun Jaitley and RBI issued statements about the deletion of the linking of SWIFT with the CBS (Core Banking System).

Diamond mogul Nirav Modi and his lawyers vehemently rejected any crimes or offences. But, ED, after an investigation, found that Nirav Modi and Mehul Choksi had indeed laundered the funds illegally via nearly 100 shell companies. CBI took three more officers of the Nirav Modi Group into custody for interrogation and investigation.

CBI then launched a drive to take into custody many corrupt officers who were involved in the scam, which included the general manager of PNB, Rajesh Jindal, who served for many years in the Mumbai Branch where the fraud allegedly took place

India then issued an Interpol Red Notice for Modi’s arrest, and authorities in London were asked to execute it. The Indian foreign ministry said in a statement that it welcomed the arrest and would seek to extradite Modi as soon as possible. According to the CBI investigation, Modi and the officials at the bank allegedly issued fraudulent Letters of Undertakings to overseas banks to obtain buyer’s credit.

Forbes once ranked Modi as India‘s 85th richest man, with a net worth of $1.8 billion.

Modi, who remains at Wandsworth Prison in London, can challenge Wednesday’s court ruling at the UK Supreme Court.

What happens if Nirav Modi wins the appeal?

Suppose the diamond billionaire wins his appeal hearing in the High Court. In that case, he can stop being extradited unless the Indian Authorities successfully get permission to appeal at the UK Supreme Court on the point of law of general public importance.

However, the catch here is that Modi can knock on the doors of the Supreme Court only if the High Court has certified that the case (extradition issue) involves a point of law of general public importance.

Conclusion: In one of the greatest grand heists of a scam in the history of Indian scams, this one certainly takes the cake.

And needless to say, Nirav Modi was not alone for not only his uncle Mehul Choksi but also his wife Ami Modi, sister Purvi Modi, and brothers Neeshal Modi and Nehal Modi are all being investigated by the Indian authorities concerning the PNB Scam for charges ranging from helping Nirav Modi to money laundering via companies owned by family members.