An Indian businessman and philanthropist named Kiran Mazumdar Shaw founded the biotechnology firm Biocon Limited in Bangalore, India. She serves as Biocon’s chairperson and managing director. She was awarded the Othmer Gold Medal for her outstanding contributions to the advancement of chemistry and science. Financial Times ranked Kiran Mazumdar among the top 50 women in business. She was ranked 65th among the world’s most powerful women by Forbes.

Additionally, she was selected as the 2020 EY World Entrepreneur of the Year. According to the Hurun Report India Philanthropy List 2019, she came in at number two on the list of women philanthropists. Kiran Mazumdar is expected to have a net worth of $4.6 billion by 2020.

Kiran Mazumdar is the founder and executive chairman of one of the world’s most renowned biopharmaceutical firms in the world, Biocon Limited. Many women out there want to start their own businesses, and Kiran is one of them. Read Kiran Mazumdar Shaw’s Success Story to learn more about this remarkable and invigorating woman’s path. On March 23, 1953, Kiran Mazumdar-Shaw was born to middle-class Gujarati parents in Banglore. At United Breweries, Rasendra Mazumdar, her father, served as brewmaster in charge. She had wanted to be a doctor since she was little, but she could not secure a scholarship. She excelled in her class and was the only girl studying the brewery programme in 1974. In the year 1989, Kiran married John Shaw at the age of 44. When Kiran joined Biocon, John, the chairman at Madura Coats, departed his position. Since 2001, John Shaw has held the position of Vice Chairman of Biocon.

At first, Kiran wanted to choose the same route as her father. She attended Bishop Cotton Girl’s High School in Bangalore.

Kiran wanted to attend medical school, but she could not receive a scholarship. Then, at her father’s suggestion, she should study fermentation science and become a brewmaster, a rather unconventional career path for a woman. She travelled to Australia to study brewing and malting at Ballarat College and Melbourne University. In 1975, she received her master’s degree. The only female student who chose the brewing course was Kiran Shaw, who excelled in her class thanks to her brilliance. After returning to India, she joined Jupiter Breweries in Calcutta as a technical consultant. After acquiring experience there, she went on to work as a technical manager at Standard Maltings Corporation in Baroda. Kiran Mazumdar chose to further her job in Bangalore or Delhi but was informed that “it’s a man’s profession” and that a woman would not be hired as a master brewer in India.

She began looking for employment abroad and was granted a job in Scotland. Before Mazumdar could move, she met Leslie Auchincloss, the Cork, Ireland-based founder of Biocon Biochemicals Limited. His business developed enzymes for the textile, food packaging, and brewing industries.

To help establish a subsidiary in India, he was looking for an Indian businessperson. The opportunity Kiran had while working for the firm changed her life. Leslie trained her to serve as a manager at his company. After learning more about the company’s operations and sales, Kiran travelled to India and started working for Biocon in a leased garage in Bangalore with a 10,000 INR investment.

When Kiran joined Biocon in 1978, she encountered many difficulties due to her inexperience, femininity, and unproven business concept. Funding was a significant problem because no bank wanted to lend her money.

After receiving her initial money, she opened her first factory in a neighbouring, 3000-square-foot shed. The company’s initial initiatives included the extraction of isinglass and papain (a papaya enzyme used to tenderise the meat) (obtained from tropical catfish and used to clarify beer).

Within a year of its creation, Biocon India became the first Indian company to produce enzymes and export them to the US and EU. With intentions to expand, Kiran put her first year’s earnings into a 20-acre property. Because of her original ideas and way of thinking, Kiran changed Biocon India from a company that manufactured enzymes into a fully integrated biopharmaceutical enterprise.

Kiran made some new dimensional discoveries in 1984. A research and development team was established at Biocon to concentrate on the creation of novel solid substrate fermentation techniques. Biocon Pharmaceuticals was the first Indian biotech company to receive investment from the US for novel technologies.

Kiran started exploring low-cost and cost-effective alternatives to existing chances. For patients to afford the medications they require, she suggested that pharmaceutical corporations sell to developing nations while considering costs.

By increasing and distributing accessible vaccines and medications in India and assisting society in meeting its medical needs, Kiran and her husband, John, have always understood the need to give people the finest care possible. She successfully launched two Biocon subsidiaries, Syngene in 1994 and Clinigene in 2000. While Clinigene concentrated on clinical research trials and developing new and generic medications, Syngene offered a contractual early research and development support service. Clinigene eventually merged with Syngene, which currently has a market capitalisation of Rs. 14,270.

In 1990, she established Biocon Biopharmaceuticals Private Limited (BBLP) as a joint venture with the Cuban Center of Molecular Immunology to produce and sell a particular line of biotherapeutics.

She serves as an impartial director on the Infosys board. She actively participates in the Maharashtra State Innovation Society’s General Body. She is on the MIT Jameel Clinic advisory board as well. She had an initial investment of 10,000 rupees. Indian law only allowed foreign ownership of 30% of the business despite being a joint venture. Kiran Mazumdar Shaw thereby owned 70% of the company.

Because of her youth, gender, and unproven company idea, she had reliability issues. She initially struggled to get money for her business. She put a lot of effort into getting her initial financial support. Kiran Mazumdar had trouble finding employees for her startup as well. She had to adapt to technology advancements to start a biotech company in India, which had a poor infrastructure at the time.

Kiran met Leslie Auchincloss, the founder of Biocon Biochemicals Limited of Cork, Ireland. The business manufactures enzymes for the textile, food packaging, and brewing industries. Auchincloss was in dire need of an Indian businessman who might assist her in launching a Biocon subsidiary in that country.

Kiran Mazumdar accepted the offer under the proviso that she would be promoted to the brewmaster position if she decided not to stay after the initial six months. She began working as a trainee manager at Biocon Limited in Cork, Ireland, to learn more about the industry. After finishing her training, she returned to India to start the business. 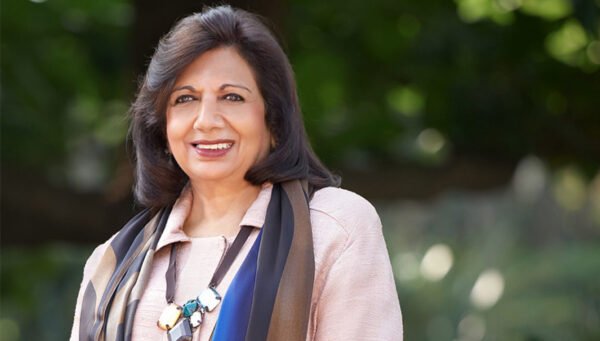 Because of her business’s enormous success, Kiran can now give to and support those in need but without the means to do so, thanks to Biocon. Since Kiran believes in giving to others and cares about people, she donates at least half of her fortune to charitable causes. In 2015, she did this to join the Giving Pledge movement.

She established the Mazumdar Shaw Foundation in India to aid the needy with the help of her husband, John. The foundation’s main focus areas are a healthy environment, healthcare, art, and education. To assist the economically disadvantaged segments of Indian society, the Foundation is active in various health and educational outreach initiatives.

Together with Devi Shetty, the Mazumdar Shaw foundation also built a 1400-bed cancer treatment facility in Bangalore. Her vision is to build a top-notch cancer centre that offers reasonable care.

Kiran enjoys reading novels and writing books as well. Two books by her, “Ale and Arty” and “India’s Innovation Challenge for Inclusive Development,” have been released.

India’s star and pride in the country’s second-richest self-made woman. Kiran Mazumdar-Shaw was unknown, but now she ranks among the most powerful women in the nation. Kiran Mazumdar has demonstrated to the world that women can complete any task and is an example for aspiring female business owners.

The rupee's next source of woe is it's $79 billion in unhedged debt. What should Investors do?

What Causes Inflation, and Do Lenders or Borrowers Benefit More from it? 10 common effects of inflation