The rupee’s next source of woe is it’s $79 billion in unhedged debt. What should Investors do?

Due to the RBI’s involvement, which ensured the rupee was less volatile than its peers in emerging markets, corporations were complacent about their dollar exposure, which led to an increase in the percentage of unhedged foreign loans. But in recent months, stock sell-offs and overall dollar strength have accelerated the currency’s losses and driven it to record lows.

In a move that could result in significant losses for the battered local currency, Indian corporations are scrambling to ensure their foreign dollar debt against further rupee depreciation.

According to the most recent information from the Reserve Bank of India, the country’s businesses had $79 billion in unhedged offshore loans at the end of March or nearly 44% of their total overseas borrowings. Due to the rupee’s more than 7% decline this year, the cost of repaying has been rising.

Since the USD/INR crossed the 79 levels, there has been an uptick in corporate activity to hedge their dollar exposure, according to Parul Mittal Sinha, head of India financial markets at Standard Chartered Plc in Mumbai.

In the current risk-off environment, dollar demand will likely rise as the percentage hedged in dollars does.

Due to the RBI’s involvement, which ensured the rupee was less volatile than its peers in emerging markets, corporations were complacent about their dollar exposure, which led to an increase in the percentage of unhedged foreign loans. But in recent months, stock sell-offs and overall dollar strength have accelerated the currency’s losses and driven it to record lows.

Even though businesses are beginning to increase their hedging levels, a central bank analysis found that the current percentage is still well below the minimum 63 per cent that is advised for times of significant foreign exchange volatility.

The rupee hit an all-time low against the dollar on Tuesday and has lost 2.4 per cent since then, ranking third among Asian currencies in terms of performance. According to data collated by Bloomberg since 1999, international funds have sold $29.5 billion worth of Indian shares this year, on pace to set a yearly outflow.

According to Citigroup Inc., the growth in dollar-rupee forward premiums reflects the increased demand for hedging by Indian corporations. It is expected to play a significant role in the rupee’s devaluation.

Samiran Chakraborty and Baqar Zaidi, economists at Citi, stated in a research note this month that holders of external debt “are likely to refinance their debt or repay through FX earning streams.” However, the massive refinancing of external debt due this year may face difficulties due to the US Fed’s increasingly aggressive tightening policy as well as a tightening of global liquidity.

According to experts, Citibank has revised its 12-month prognosis for the rupee downward from an earlier prediction of 79 to 81 per dollar. 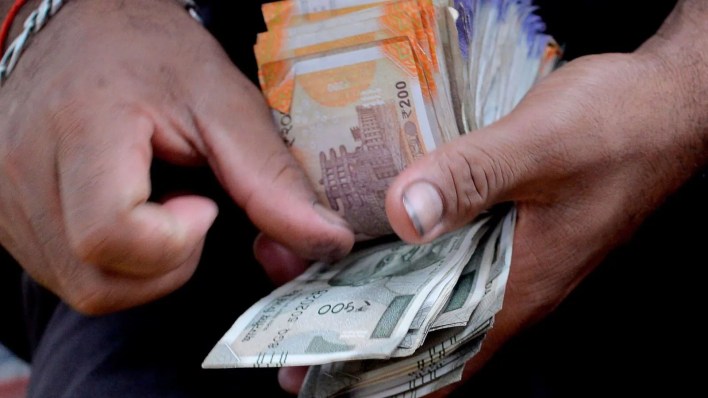 Hedging international borrowing can be replaced by switching away from dollar funding entirely and looking for more affordable domestic options.

ReNew Power Chief Financial Officer Kedar Upadhye stated in an interview last week that the company’s “broader approach” is to hedge the forex exposure as and when the need arises to mitigate the currency and interest-rate movement risk.

What should traders and long-term investors do as the rupee continues to fall?

Since the start of the year, the rupee has lost about 8% of its value, and over the past few sessions, it has fallen to fresh record lows versus the US dollar. Due to monetary policy tightening and the ensuing FPI outflows from capital markets, the currency has crossed the 80 threshold. The risks for the indigenous money have also increased due to India’s growing trade deficit and capital outflows.

The worst is already priced in the rupee, according to Hitesh Jain, lead analyst-Institutional Equities at Yes Securities, who predicts that the currency will peak at about 80.5-81 against the dollar for the remainder of this year.

“We say this because there is emerging evidence that global inflation has peaked, as seen by the sharp decline in food, oil, and other industrial commodity prices. While worldwide aggregate demand is weakening, as seen by a drop in global economic estimates, the stress in the worldwide supply chain is also said to have decreased, Jain continued.

FII outflows from the equity markets have eased during the first fortnight, according to patterns from July, while Indian markets have managed to post some gains over the past 30 days, despite ongoing suffering in global equities.

Analysts noted that even while foreign portfolio withdrawals from the local stock market slowed in July, it is still too soon to determine whether the pattern has changed.

How should investors behave?

“Investors with a long time horizon should refrain from any knee-jerk reactions and instead concentrate on asset allocation. However, if one is a trader in the equity markets, such traders may adopt a strategic perspective of the situation and avoid companies that heavily rely on imports as well as those that have a significant foreign currency debt because in such a situation, companies with strong negotiating leverage and a sizable export market tend to perform well, “Ventura Securities was recommended.

Any exhaustion in the upward trend for crude oil could indicate a likely trend reversal in the INR if Rupee depreciation is occurring alongside rising crude oil prices. It was said that investors should then begin paying particular attention to how FPIs are moving.

See also  Pfizer on a spree of extortion from poor countries in the name of Covid -19 vaccine; Is profiteering more important than the lives of people? And can Pfizer resort to bullying in the name of saving lives?

According to CII-Southern Region Chair Suchitra Ella, the Indian rupee is holding up well compared to other global currencies, and the recent decline in the value of the rupee is not particularly alarming at the moment. Since a few days ago, the rupee has been losing weight against the US dollar.

Due to significant dollar demand from importers amid rising crude oil prices, the rupee fell 13 paise to close Wednesday below the 80 level for the first time. “The Indian rupee is holding up well, in our opinion. At this time, we are not overly concerned about it. Because it is displaying adequate strength, if not superior strength, to many other global currencies, “Bharat Biotech International Ltd. co-founder and joint managing director Ella spoke to reporters in this area.

She was responding to a question regarding the industry’s worries about reducing rupee value and driving up their input costs. She believed that following COVID-19 and other problems in various countries, the country had recovered better than other countries.

“That is how the country feels, and CII has also responded to it warmly. We extrapolate this kind of data from around the world and occasionally compare it to the economies of European countries in addition to India’s data and that of our neighbours in the area, SAARC or ASEAN. I believe India is in a really good position right now, and the rupee is performing incredibly well as a currency,” She said. Ella voiced optimism for the future growth potential of the nation.

According to analysts, a falling rupee will increase business borrowing costs.

The cost of external borrowing and hedging for local businesses will increase if the currency weakens. Concerns about a recession in important countries might not significantly increase exports. Still, economists warned it would continue to drive up import costs and increase the current account deficit (CAD).

However, they also suggested that some rupee depreciation is necessary for India to maintain export competitiveness as the currencies of the country’s rivals have also dropped against the dollar.

Pronab Sen, a well-known economist and former head of the National Statistical Commission, warned against using force to protect the rupee. “This is because any such defence instils in foreign portfolio investors the assumption that whenever interventions are minimised, the value of the Indian rupee will eventually decline. The result could be detrimental.

See also  After Airtel, Paytm Payments Bank Gets Into Trouble With RBI

The RBI has said that while there is no specific level, it is aiming for to control the rupee, there will be no “jerky volatility.”

Sen remarked that this strategy appeared to be the best one at the time.

When the rupee reaches 80 versus the dollar, according to Bank of Baroda Chief Economist Madan Sabnavis, “there will be more depreciation, as the market would infer that the RBI is alright with this movement,” The impression of forex risk will rise as a result of this uncontrolled devaluation. Increased interest rates abroad will make borrowing from abroad less appealing, according to Sabnavis.

He noted that as the RBI continues to intervene and revaluate with the dollar appreciating versus all other currencies, pressure on the foreign exchange reserves would be relentless.

Indranil Pan, the chief economist at Yes Bank, stated that imports would cost more even while exports might not rise significantly. Because global growth than currency rates influence exports for a nation like India, exports may not increase. This indicates that increasing exports to close the current account deficit might not occur.

Companies looking to seek capital internationally will become more cautious and need to hedge their currency risk. If the borrowers haven’t hedged against currency risks, the repayments on their external commercial borrowings will be problematic for them, according to Pan.

The rupee may depreciate to 81/dollar in Q2FY23, according to ICRA Chief Economist Aditi Nayar, “amid the rebound in crude oil prices and the belief that the dollar will remain relatively strong in the immediate term.”

According to Nayar, “global sentiment and the direction of FPI flows will ultimately determine whether the INR continues to devalue in the remaining months of the year, or if US recession fears eventually arrest the dollar rise.”

Given that several emerging market currencies have experienced a deeper depreciation relative to the dollar this year than the rupee she continued, some rupee depreciation is necessary to safeguard export competitiveness.

India is a net importer of commodities, according to India Ratings’ chief economist DK Pant. Although exports will increase, the increase will be constrained because of weaker growth or recession in the developed countries. The current account and inflation will increase with a weaker currency. When capital continuously leaves the country, the money tends to weaken further.”

U.S. leadership on Syria has been abdicated to Russia and Iran by Biden