India has been pushing for peace in Ukraine and wants the Russians out of that country, British Prime Minister Boris Johnson said on Friday after holding wide-ranging talks with his Indian counterpart Narendra Modi.

At a press conference, Johnson said Modi has been “very strong” in his reaction to what happened in Bucha in Ukraine and that everyone understands and respects New Delhi’s decades-old historic relationship with Moscow. 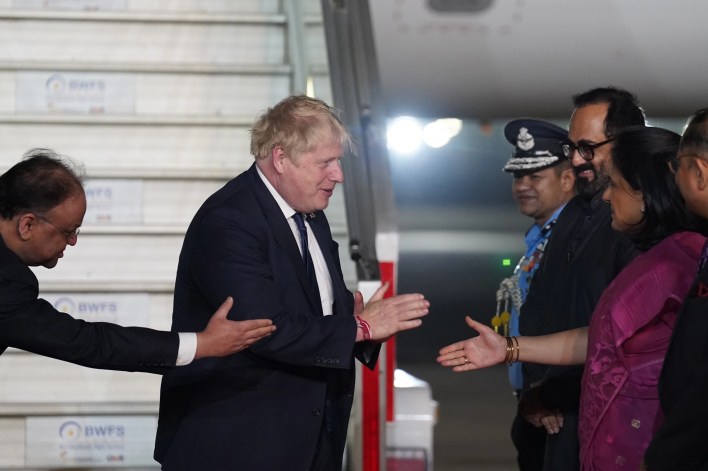 The British prime minister was responding to question on whether he asked Modi to use his influence over Moscow to put pressure on Russia to stop its aggression against Ukraine.

Johnson also announced that the UK’s embassy in the Ukrainian capital Kyiv will reopen next week and asserted that Britain and its allies will not watch passively to Russian President Vladimir Putin’s “onslaught” in Ukraine.

He said it is clear that Modi has intervened several times in asking Russian President Vladimir Putin what on earth he thinks he’s doing and where he thinks this is going.

“I think you have to recognise that Indians and Narendra Modi, in particular, came out with very strong language on what’s happened in Bucha. ..Talking to PM Modi, it is clear he has already intervened several times with Vladimir Putin,” he said.

“What the Indians want is peace in Ukraine and they want Russians out and I totally agree with that,” Johnson said, adding India and the UK have greater convergence on various challenges facing the world.

At the same time, he said India-Russia ties are historically well-known and they are not going to change it.

“The situation around the world is obliging the UK and India to do more together… The Russia-India ties are historically well-known and they are not going to change that,” he said.

Johnson’s two-day visit to India came amid growing disquiet in Western capitals over New Delhi’s refusal to directly condemn the Russian aggression in Ukraine and its decision to procure discounted Russian oil.

“The UK and our allies will not watch passively as Putin caries on this onslaught. And what I think we’ve seen here in New Delhi is one of the world’s oldest democracies, and the largest democracy, sticking together and confronting our shared anxieties about autocracies and autocratic coercion around the world and acting together to make our countries safer and more prosperous,” he said.

In his media statement, Modi called for dialogue and diplomacy to resolve the crisis in Ukraine.

“We stressed on dialogue and diplomacy for an immediate ceasefire and resolution of the problem in Ukraine. We also reiterated the importance of respect for the territorial integrity and sovereignty of all countries,” he said.

Asked about concerns over human rights violations and the rise of Hindu nationalism in India, Johnson said India is a great democracy and it has constitutional protection for its people.

“On our relations with India and how we deal with questions around human rights and democratic values, of course, we have these conversations but the advantage of our friendship is that we can have them, and we can have them in a friendly and private way,” he said.

“It’s very important to realise that India has constitutional protections for communities, India is very very different from autocracies around the world. It is a great democracy….around 1.35 billion people live in a democracy and that’s something we should celebrate,” he said.

On the crisis in Ukraine, a joint statement issued after the Modi-Johnson talks said the two leaders expressed in the strongest terms their concern about the ongoing conflict and humanitarian situation in that country. 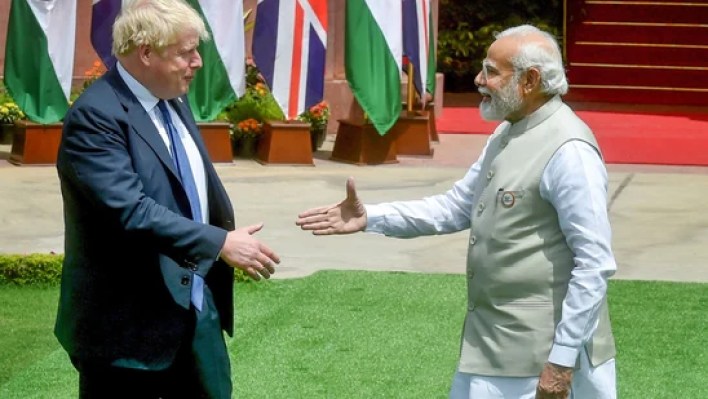 “They unequivocally condemned civilian deaths, and reiterated the need for an immediate cessation of hostilities and a peaceful resolution of the conflict, which was having severe implications across the globe, in particular for developing countries,” it said.

“They emphasised that the contemporary global order has been built on the UN Charter, international law and respect for sovereignty and territorial integrity of states. They reaffirmed their willingness to provide humanitarian aid for the people of Ukraine,” it added