India banned wheat exports on May 14. Previously, India sought to fill the supply-chain hole left by the protracted conflict.

Wheat prices have skyrocketed, making it today’s gold. Supply networks have already been interrupted by the conflict between Russia and Ukraine. India’s hesitant attitude toward wheat exports has driven up world prices even further.

India banned wheat exports on May 14. Previously, India was attempting to fill the supply chain hole left by the protracted conflict. It had promised to make up for supply shortfalls caused by Ukraine’s invasion, which accounted for 12% of all exports in the world.

Is it better to export or not to export? 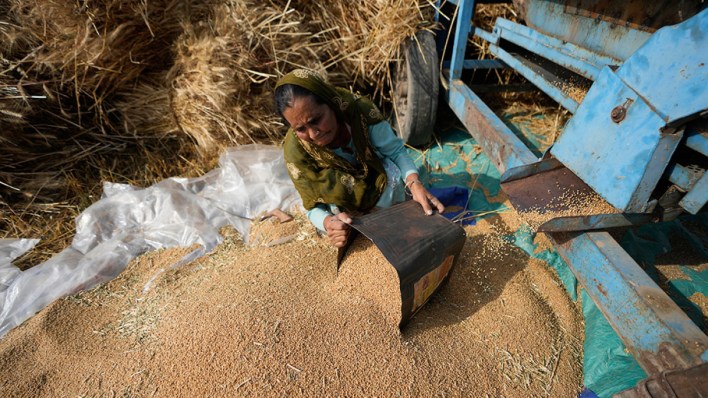 Despite warnings made by various experts and stakeholders that India’s own production and procurement this year had been hampered by the country’s recent heatwave, the government has permitted the private sector to reap the benefits while the sun shines. Due to the export program, farmers were allegedly receiving a 10% premium over the Minimum Support Price (MSP) for wheat.

However, rising inflation in India, particularly in the food sector, may have prompted the government to reconsider its plan. The heatwave has affected production, which might affect next year’s supplies. With the war’s uncertainty continuing to grow, inflationary pressures are only likely to worsen. Except for vegetables, wheat saw the greatest inflation rate of 14.04 per cent in March.

“The government’s impression that inflation is out of control, particularly in food commodities, appears to have been a source of anxiety. Excessive price volatility is not something that can be tolerated.

The domestic market price is currently increasing. The prohibition will not cut prices, but it will keep them stable. Farmers will still make more money than they did previously, but not as much (as exporting would have enabled them to),” said NR Bhanumurthy, vice-chancellor of the Dr B.R. Ambedkar School of Economics University in Bengaluru.

The restriction drove up worldwide wheat prices, which were up almost 6% per bushel when markets started on May 16. Local prices in many states declined by 4-8 per cent. Regardless of the immediate impact on costs, others argue that the ban should have been implemented.

“The embargo was necessary because we cannot allow unrestricted wheat exports without comprehending that if we sell everything is surplus in our country, we may face internal issues in the future.” It’s also important to remember that the next wheat crop won’t arrive for another year. We are living in a period of turmoil due to climate change. We’re not sure if another Covid wave will appear. One of the reasons behind the decision to suspend exports could be that the revised wheat production estimate could be lower than the previously estimated 111 million tonnes (mt). In an Indian Express column, ICRIER agricultural professor Ashok Gulati and ICRIER researcher Sanchit Gupta argue that wheat procurement could grow from more than 43 million tons to about 19-20 million tons by the end of June. I am. Last year’s tonnes and all other factors could be that April wheat inflation was 9.59% (year-on-year), while overall grain inflation could be 5.96%.

“In its zeal to be the world’s saviour, India urged private trade to export huge quantities of food, which they eagerly did.” The government of India has announced a six-month extension of the subsidised food program. As a result, the Government of India’s move to limit wheat export – prohibiting private sector wheat export contracts and permitting only government-to-government export – has come as a breath of fresh air not just for Indian farmers and merchants but also for the worldwide community.

“India has lost enormous credibility as a result of this, as seen by the G7’s criticism of the action,” said Ajay Jakhar, head of the Bharat Krishak Samaj, in a commentary for The Economic Times.

After 75 years of independence, Jakhar claims that India still lacks accurate estimates of real-time agricultural output, yearly consumption statistics, or inventories in private commerce. He claims that such actions skew the estimates of farmers and merchants who hold equities.

“Approximately 2.5 million tonnes of wheat procured by exporters is kept in the open at ports, and 1.2 million tonnes is with dealers across the country,” says the report.

Tens of thousands of farmers, in addition to merchants, store wheat stockpiles. Exporters have contracted in-country stocks with local dealers, with a condition allowing for contract termination if the government intervenes, as it has now. He wrote, “Many contracts will now be cancelled.”

Approximately 4.5 mt of wheat has already been negotiated for export in FY23, according to reports. One-third of it was already exported in April of this year. To avert pandemonium, the administration has decided to let consignments that had been stalled awaiting custom clearance on or before May 13 pass through.

“It has been agreed that wheat consignments turned over to Customs for inspection and recorded into their systems on or before May 13 would be allowed to be exported,” the trade ministry said in a statement. 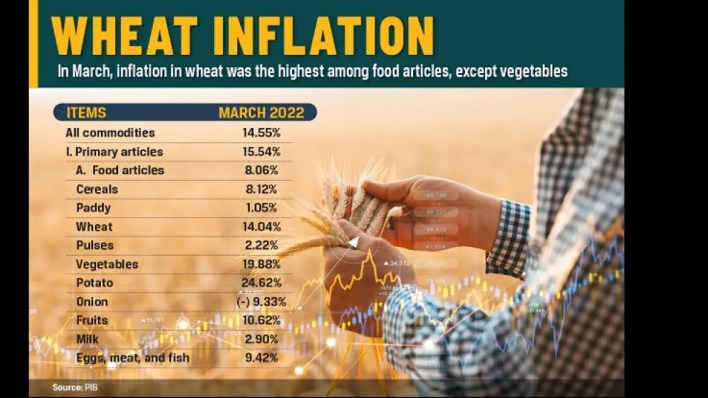 Wholesale wheat prices in all major wheat-producing states, except Punjab, Uttar Pradesh, and Rajasthan, plummeted a day after the government announced the embargo. The largest one-day drop occurred on May 14 in Madhya Pradesh’s local wholesale markets. Wheat prices in the state have dropped by roughly Rs 94 per quintal, to Rs 2,039 per quintal, from Rs 2,133 on May 13.

Wheat crops in the EU and wheat planting in the US have been influenced by global inflationary pressures, as well as dry circumstances and high temperatures. All of this puts India fully reliant on a favourable monsoon and forces it to reconsider its contingency preparations. The Food Corporation of India’s (FCI) wheat stock was 189.90 lakh tonnes as of April 1, 2022. Wheat demand under the PMGKAY (Pradhan Mantri Gareeb Kalyan Yojna) increased by 74% to 187 lakh tonnes in the last financial year of FY22, compared to 107 lakh tonnes in FY21, causing the stock to fall by 83 lakh tonnes in a year.

Several water tanks have been constructed in villages across India, according to a co-authored piece, which needs to be desilted and readied to store rainfall to take advantage of the monsoon. While India’s monsoon forecast for 2022 is typical, the government must push for the adoption of drought-tolerant crop types in at least drought-prone areas.

A lesson for states like Punjab and Haryana may be learned on the sidelines… Except for Punjab (and Haryana, to a lesser extent), wheat farmers in all other states benefited from the increasing price rally (until May 14, 2022).” Punjab’s higher transaction costs of around 8.5 per cent functioned as a barrier for private merchants to buy from the state. Wheat prices were just a little higher than the MSP, but they were the lowest among other states.

“The state may take a page from Madhya Pradesh and reduce transaction costs to assist farmers to benefit from rising price dynamics,” Hussain said.

Bhanumurthy, like Hussain, believes that some states are better positioned for exporting than others. “Madhya Pradesh began with soybean and evolved into a major wheat grower. Because local soybean consumption is lower, they have better marketing capability, particularly with foreign players.

They were able to negotiate higher wheat prices as well. Conventional states like Haryana and Punjab, which are heavily reliant on MSPs and have more traditional marketing systems, I believe would be unable to adapt to international trading norms.”