Every year on or around August 15 in India, anecdotes from the war for independence resurface in popular culture. But after August 15, 1947, the actual effort to achieve freedom finally started.

Even though there was an implicit understanding among the public that things would not be easy, the first few years in newly independent India would have been full of optimism and hope. And over the past 75 years, India has made a lot of effort to represent itself on the international stage commensurate with its size and historical significance.

Many of us today share the same confidence over India’s future on the international stage, much of which would depend on the contribution of Indian technology. However, we can agree that there will be many hazards ahead.

So let’s make a bold comparison: The past 25+ years have been all about developing maturity if the advent of the internet age at the turn of the 20th century was another period of India’s freedom. When Indian companies raised record-breaking funding and climbed to the top of the world rankings in 2021, the ecosystem’s transition from an early stage to the present growth phase began.

PM Narendra Modi stated on Independence Day 2015, “We are looking at measures for helping entrepreneurs. We must rank first among startups. Stand up for Startup India! This began the adventure of Startup India, which has grown rapidly.

The overall picture of Indian technology is positive when seen in the context of the period since 2014, with the Indian startup ecosystem achieving a combined worth of $450 Bn. According to government statistics, startups have generated more than 7.5 lakh jobs nationwide. But, as we go farther into the ecosystem, we notice the gaps that must be filled.

However, being a part of startups’ growth journeys since 2014 has undoubtedly given us reason for hope about the future, assuming some of these urgent worries are resolved. After the groundwork was set by IT behemoths like Infosys, TCS, Wipro, and others, we said that India was in the age of startups in 2019. From the market’s overall maturation perspective, three years is not a long period. Still, the pandemic’s effects on conventional enterprises and the funding boom in 2020 and 2021 have undoubtedly quickened the process.

Statistics highlight the expansion of startups, their maturity in terms of IPO and exits, the increased involvement of domestic and foreign investors, the sharper focus on unit economics under the present downturn, and more, demonstrating the maturity of the Indian market.

With approximately $131 Billion invested in Indian startups over the last eight years until June 2022, India only falls behind the US and China in terms of the total number of unicorns.

Even though Chinese and American entrepreneurs have garnered far more money since 2014, India’s 49% growth rate in startup investment and the country’s rapidly expanding internet penetration make it a favourable market for new businesses.

Similarly, India is outpacing China in producing unicorn startups. It is on track to surpass its Asian neighbour in the coming years, especially in light of China’s crackdown on big tech and efforts to centralise power.

We can see that eCommerce and fintech have attracted the majority of financing when we look more closely at the industries that have contributed the most to this surge.

Ecommerce and fintech are important industries that support the larger tech ecosystem. Like, the growth of eCommerce is mainly responsible for the expansion of logistics technology.

In addition, introducing fresh D2C models like roll-ups, houses of brands, and others has changed the character of the e-commerce sector and increased support for independent businesses.

In the post-pandemic era, the same may be said about other industries, including healthtech, fintech, and enterprise tech. The way Indians deal with startups daily has quickly evolved due to the widespread adoption of digital payments, communication, company management tools, and telemedicine platforms.

Over 40% of all capital since 2014 has gone to e-commerce and fintech, and enterprise technology has witnessed the most deals over the past eight years—nearly 1,400 out of the 5000+ deals—with over $54.1 billion in funding.

Over half of the investors in the Indian ecosystem have joined in the past two years, and the ecosystem is on the verge of reaching 10K unique investors.

The establishment of new funds to assist pandemic-influenced digital adoption and the launch of micro VC funds that seek to scout early-stage investments have had a major role in this. The total corpus raised for the 78 startup funds that were either announced or opened in the first half of 2022 exceeded $12.3 Billion, more than doubling the $6 Billion raised by VC funds in 2021.

And this is despite the slowdown in the economy, demonstrating the continued optimism of investors in India. Investor interest in these late-stage firms has been stoked by a recent wave of IPO from large startups like Zomato, Paytm, Nykaa, Policybazaar, and others. 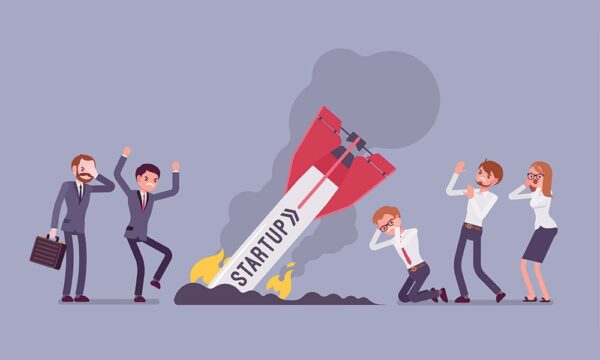 The Cracks In The Startup India Story

The macro view is favourable for India, but the startup story only shows signs of weakness when we examine sector-specific growth, changes, and microtrends. While it can be argued that the Indian government has made it easier to register new businesses over the past eight years, on the other hand, the constant policy reversals and lack of clarity even in areas where policies are present have made life challenging for startups, large tech companies, and international juggernauts.

Similar to how online gambling is being scrutinised by many state legislative bodies, the future of the cryptocurrency business is likewise uncertain despite the imposition of government taxes. Given that the government has raised the issue of mis-selling and fees, edtech titans may need to prepare for more regulations.

Due to organisations like the RBI, CCI, Enforcement Directorate, SEBI, and others, the Indian market is one of the most difficult from a regulatory standpoint. In all cases relating to corporations that are increasingly flouting various corporate governance and regulatory compliance requirements, these bodies now have significant legal authority.

Even though many of the investigations into businesses are legitimate, startup founders contend that regulators frequently intervene without warning, negatively impacting businesses that might not even be in the same industry. At the same time, regulations for each industry must be followed. For many brand-new startups and unskilled entrepreneurs, this creates a regulatory quagmire.

For example, while Startup India has helped the e-commerce industry, the government’s rules for e-commerce and online retail have caused marketplaces to run into difficulties. The government has taken steps to improve related party transactions in e-commerce and seller ownership, but this has also created many issues for smaller merchants.

Similarly, the absence of a data protection regulation allows consumer services, social media, enterprise technology, and fintech companies to occasionally act carelessly with their customers’ data. The startup environment has seen a trickle of legislation in each of these areas rather than a comprehensive privacy law that would address all of the problems. The Future Of Startup India

Industries outside of fintech, e-commerce, and crypto must consider the possibility of regulatory disruption. The so-called “angel tax,” which affected many startups in the past, the lack of clarity surrounding cryptocurrency regulations, which forced many businesses to close up shop, and the strict compliance regulations forced many businesses to switch to structures with headquarters in Singapore or the US.

There is no question that the government has tried to make compliance less demanding. Still, businesses can’t avoid considering relocating the parent firm out of India, given the continual threat of regulations.

To understand how they believe Startup India may move forward following the success of the last eight years, many founders were asked from many sectors. Obviously, haphazard restrictions were the source of the majority of complaints.

The largest issue for business owners and startups, besides access to VCs, is finding qualified workers.

One of the main benefits of the startup ecosystem is job creation; but, while adding more than 7.5 lakh employment in the last seven years, according to the DPIIT, Indian businesses experience a talent shortage.

This is a fantastic barrier for businesses, and the government should prioritise improving the educational system to better educate the workforce for the future.

Yes, the National Education Policy seeks to alter the current system, but results will probably take years to manifest. Currently, the ecosystem’s vitality has been slightly subdued by the talent shortage and the ongoing prospect of regulatory changes. The global economic recession and India’s inflation have harmed trust, raising operating costs during a difficult period.

Naturally, business owners will always prefer fewer laws. Still, the government’s strategy cannot entirely be blamed because some of these fields, like cryptography or data security, are quite new and constantly changing. From a policy perspective, the next three to four years will be crucial as the tech sector quickly matures.

Environmental, social, and governance activities and corporate social responsibility (CSR) initiatives will gain prominence. Startups will use their size as they integrate into daily life to give back to the neighbourhood and society as a whole. Sustainability will be a key component of a startup’s operations, financial performance, and global effect.

In the startup ecosystem, there is a perception that long-term policy stability will emerge, but, for the time being, the situation is similar to the uphill struggle faced by nation-builders in the years immediately following independence.

The biggest difficulty for today’s entrepreneurs, who are in many ways nation builders, is to continue their work ethically and humanely.