Taliban ban on NGOs: how it could exacerbate the humanitarian crisis. The ban is a fatal blow to women’s rights throughout the Taliban-run nation as well as to Afghanistan’s crucial aid ecosystem.

According to officials, the Afghan government announced on Saturday (December 24) that women would no longer be permitted to work for national and international humanitarian organisations.

The ban is the most recent setback for women’s rights under the Taliban government, which seems to value eliminating women from public life over preventing the country from further devolving into a catastrophic humanitarian crisis that puts the lives of millions of Afghans in danger. This action puts at risk the billions of dollars in aid that have kept Afghanistan from starving to death despite a crumbling economy.

The Ministry of Economy issued the directive, which was announced in a letter and confirmed by the ministry’s spokesperson to The New York Times, and threatened to revoke the operating licences of any organisations that disobeyed. It was unclear whether the ban would apply to UN aid organisations, to all women working in aid organisations, or to only Afghan nationals.

Afghanistan’s long-standing malnutrition crisis has dramatically worsened since the Western-backed government fell last year and the economy virtually collapsed overnight. Millions of Afghans nationwide lost their jobs as food prices rose beyond the means of many families and emaciated kids flooded malnutrition clinics.

According to a U.N. analysis, more than half of the world’s population, or close to 20 million people, are currently experiencing levels of food insecurity that could be fatal. Six million of them are on the verge of going hungry.

The country has been saved from mass starvation over the past year thanks to billions of dollars in aid from humanitarian organisations that have fed millions of hungry families for free and provided millions of malnourished children with life-saving medical care.

Women’s exclusion would be a devastating blow to Afghanistan’s aid system.

Since donors and decision-makers object to the open discrimination against women in their ranks, many humanitarian aid organisations view the Taliban government’s decision to ban female staff as a red line that could result in the closure of their operations nationwide.

Aid workers claim that ceasing operations would effectively destroy Afghanistan’s aid ecosystem and cut off a lifeline for the record 28.3 million Afghans (or two-thirds of the population) who are anticipated to require some type of humanitarian assistance in 2019. 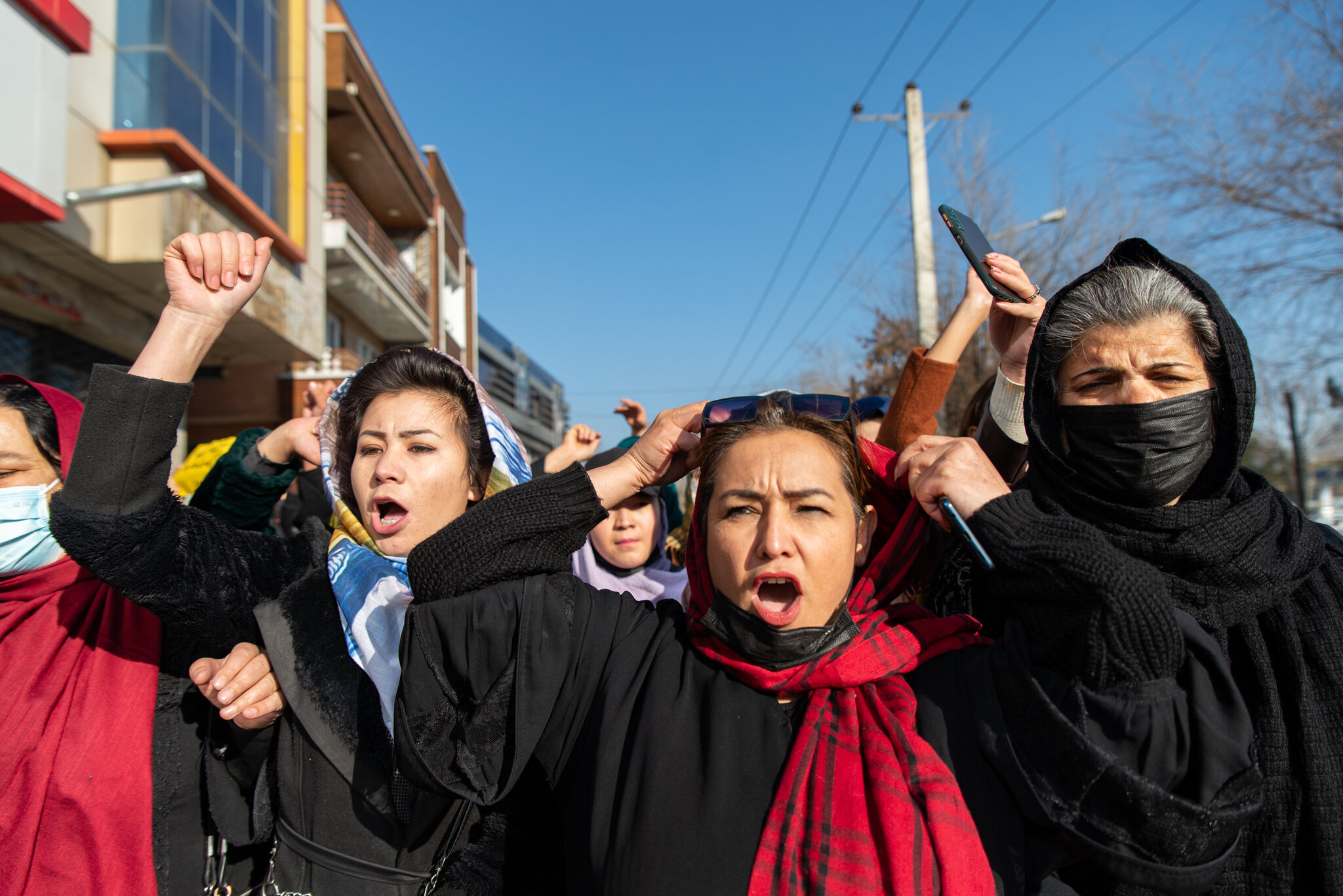 The loss of female aid workers could seriously impede aid delivery, especially to women in need, even for organisations that remain in Afghanistan. In many areas of the nation, women typically only interact with men in the family and are therefore unable to directly receive aid from male aid workers, such as food aid or medical attention.

Several foreign aid organisations were debating immediately suspending their operations in the nation until further notice hours after the decree was made public. In order to discuss the effects of the ban with his senior leadership, John Morse, the country director for the Danish nonprofit DACAAR, announced he would close his office on Sunday.

The main topic of discussion, according to him, is NGOs banding together and pressing the Afghan government to overturn the decree.

The ban on women attending private and public universities, which the Afghan government issued less than a week prior, dashed the hopes of millions of young women who had watched as the freedoms they had enjoyed while living under U.S. occupation had been gradually curtailed ever since the Western-backed government’s fall. The new administration also broke its March promises to permit girls to enrol in public high schools.

The actions further indicated that the Taliban’s leadership has abandoned any desire to compromise and is committed to restoring the strict rule that the group upheld during its initial period of rule, in the 1990s.

Both announcements also highlight how ideological hard-liners within the Taliban movement—including its supreme leader, Sheikh Haibatullah Akhundzada—have increased their hold on those who have pushed for moderation in order to keep relations with the international community.

According to six education professionals from five different districts in Kabulhttps://www.inventiva.co.in/stories/who-is-kabul-chawla-of-bptp-living-life-to-the-fullest-after-absconding-allegedly-in-a-housing-scam/, security forces this week held meetings with school principals, teachers, and administrators of private education centres, ordering them to shut down their winter courses for all girls — including those in primary schools — and send home their female teachers. This move stoked fears that the government plans to further restrict women’s rights.

Despite the fact that schools are currently on winter break, many students have been taking additional classes at private schools and learning facilities in preparation for the upcoming spring semester.

A spokesperson for the Ministry of Education denied other reports that the government had officially forbade girls from attending primary schools when questioned about the meetings. The meetings, however, sparked worries that the Afghan government might be setting the stage for further limiting girls’ access to education in the coming year.

A major setback for female breadwinners

When combined, the bans on women working in NGOs and on higher education were a heartbreaking blow to Afghan women who had worked hard to establish themselves as public figures after the Taliban’s first regime was overthrown in 2001. Many Afghan women who worked for aid organisations saw their occupations as a symbol of that twenty-year struggle. However, in the midst of the economic crisis and widespread unemployment, their incomes have also turned into a lifeline for their families.

Maghfira Ahmadi, who works for Doctors Without Borders in Kunduz, a bustling commercial centre in northern Afghanistan, said, “I am in shock.”

Since the Western-backed government fell apart last year and the new government stopped paying the pension of her father, a retired public-school teacher, Ahmadi claimed she is the only provider for her family.

She confided, “I am very concerned about the future. “I used to support my family entirely with the money I earned, but I don’t know what will become of us.”

In a statement, the United Nations Office for the Coordination of Humanitarian Affairs said that it would try to arrange a meeting with Taliban leadership to get more information about the edict.

The statement stated that any such order “would be a clear violation of humanitarian principles and would violate the most fundamental rights of women.” “This most recent choice will only worsen things for the most vulnerable, particularly women and girls.”

Without women in their workforces, Save the Children, the Norwegian Refugee Council, and CARE claim they cannot effectively reach children, women, and men in Afghanistan who are in dire need.

The NGO ban was announced a day earlier, allegedly as a result of women not properly donning the Islamic headscarf.

In the midst of deteriorating humanitarian conditions, the three NGOs offer support and services in the areas of health care, education, child protection, and nutrition.

Neil Turner, the director of the Norwegian Refugee Council for Afghanistan, told The Associated Press on Sunday, “We have complied with all cultural norms and we simply cannot work without our dedicated female staff, who are essential for us to access women who are in desperate need of assistance. He claimed that the company employs 468 women nationwide.

Millions of people fell into poverty and starvation after the Taliban took control of the country and wrecked its economy.

Foreign aid virtually disappeared overnight. Access to international organisations and the outside funds that financed Afghanistan’s aid-dependent economy prior to the withdrawal of US and NATO forces have already been hampered by sanctions against the Taliban leadership, a ban on bank transfers, and the freezing of billions in the country’s foreign exchange reserves.

As living conditions deteriorate in the coming year and the nation prepares for its second winter under Taliban rule, more Afghans will struggle for survival, according to Martin Schuepp, a top official from the International Committee of the Red Cross, who spoke with the AP last month.

The NGO ban, the US warned, will prevent millions of people from receiving essential and life-saving assistance.

United States Secretary of State Antony Blinken stated on Saturday that “women are central to humanitarian operations around the world.” “The Afghan people could suffer greatly as a result of this choice.” Upon hearing about the NGO ban, UN Secretary-General Antonio Guterres expressed his deep concern.

In a statement, he stated that “more than 28 million Afghans who depend on humanitarian aid for survival are being helped by the United Nations and its partners, including national and international non-governmental organisations.”

The International Rescue Committee expressed shock at the Taliban’s decision and noted that more than 3,000 of its employees there are female. It was unclear right away if it is also ceasing operations.

Economy Minister Qari Din Mohammed Hanif wrote a letter containing the directive for the NGO. It stated that any organisation found to be disobeying the order would have their licence in Afghanistan revoked.

The Taliban’s all-male, religiously motivated government has issued a flurry of decrees that are reminiscent of their rule in the late 1990s, when they banned women from public spaces and education and outlawed music, television, and many sports.

The order from the Economy Ministry comes days after the Taliban forbade female students from enrolling in universities nationwide, sparking international outrage and protests in important Afghan cities.

In support of female students, people in the western city of Herat opened their windows at around midnight Saturday and chanted “Allahu Akbar” (God is great), where earlier protesters had been dispersed with water cannons. On Saturday, hundreds of male students at Mirwais Neeka University in the southern city of Kandahar boycotted their final semester exams. As they left the exam room, one of them told The Associated Press that Taliban forces attempted to disperse the crowd. Akhbari, who only gave his last name, said, “They tried to scatter us so we chanted slogans, then others joined in with the slogans.

“The Taliban believed that we were protesting when we refused to move. The Taliban started firing into the air with their rifles. One of the two men I saw being beaten received a head injury. Ataullah Zaid, the provincial governor of Kandahar, denied there had been a protest. He claimed that some individuals tried to enter the school by posing as teachers and students but were stopped by both students and security personnel.

Why are baseball teams spending so much money?

Centre’s orders on travel, oxygen stock: Here are the Covid developments you need to know today