Discussing about Economic Recovery. It is no news that the odious pandemic has wreaked havoc on the economy. The pandemic effectively and quite detestably had inflicted economic and humanitarian losses on nations that had led various countries to reel under its effect.

According to various analysts and economists, given the unprecedented economic slowdown last year, this financial year, the global economic recovery will witness increased growth due to the low base of the last financial year. This will be also due to the fact that such growth will be aided by the easing of COVID-19-related restrictions by various countries and states.

It is to be noted that such roots for growth and economic recovery effectively deepened in the month of July 2021, this was especially true for India. Given the rate of vaccination campaigns and easing of lockdowns, India has been witnessing growth which is expected to maintain momentum in the coming months.

Why had unlocking led to economic recovery?

Various states, after receding waves of the pandemic, had eased stringent lockdowns in various states. This unlocking in various states had manifested itself in highly improving the performance across various high-frequency industries. This also had included improvement in the service sector indicators, toll collection, and mobility in the month of July 2021. Such a claim was also corroborated in a report by ICRA Ratings.

It is to be known that demand and investment in the economy are the key drivers. Given the Indian economy is in the nascent stage of recovery, thus easing of lockdowns leading to mobility amongst the public will to robust demand in the economy. This is also coupled with strong consumer and producers’ confidence that had regained momentum after positive Economic Recovery data across the world was received. 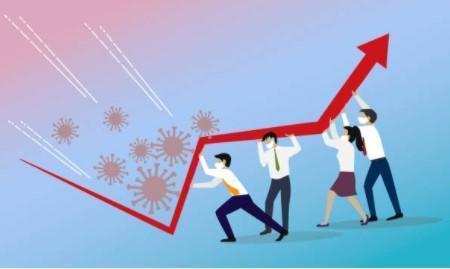 According to reports, the economic recovery gained momentum specifically after the further easing of the state-wise restrictions, especially in the southern states. This effectively and emphatically led to the deepening of roots of the economic recovery in the month of July. On top of easing restrictions in the economy, despite a normalizing base, various indicators, strategically eight out of the 15 high-frequency indicated towards a robust encouraging improvement on year-on-year growth bases.

What do various economic indicators say?

On the other hand, effectively 10 out of the 13 non-financial indicators displayed robust growth or an increase in month-on-month terms in the month of July 2021.

Aditi Nayyar, a principal economist at ICRA stated that the volumes of effectively seven out of the 13 non-financial indicators, which include non-oil merchandise exports, electricity generation, GST e-way bills, PV output, petrol consumption, and rail freight traffic, rose above both their pre-Covid level for the month of April 2021 and July 2021.

But why did this effectively lead to increased growth momentum in the economy? This is due to the fact that as the states started unlocking, mobility was restored,

This was especially true for retail and recreation. These posted a sharp improvement from around 60 per cent below baseline recorded at the end of May 2021 to effectively 23 per cent that was below baseline by end of July 2021.

According to reports, the FASTag toll collections too rose by a significant 15.5 per cent. This was increase to a whopping Rs 2,980 crore in the month of July 2021. But reportedly, this was while mildly trailing the record-high of Rs 3,090 crore that was recorded in the month of March 2021.

Though the month of July showed robust economic growth, it is to be noted that according to early Economic Recovery data for the month of August 2021 gives mixed indicators and trends across various sectors.

The economic reports also witnessed mixed and contradicting data. This was effectively due to mixed signals that were given buy diesel and petrol consumption. The petrol sales of state refiners for the first half of the month of August 2021 effectively exceeded both the year-ago and pre-Covid levels. But on the contrary, the data and consumption for diesel continued to trail the pre-Covid performance.

On the other hand, the YoY rail freight growth too stood at a robust and healthy 14.1 percent during the time period of August 1-10, 2021. Thus, what lies ahead for the Economic Recovery growth of India is still a mystery that needs to be deciphered.

How to Keep Employees More Engaged in Today’s Work Environment

Is Now a Good Time to Start an Online Casino in India?