In a positive turn of events for India, many economic indicators have pointed towards an economic revival. Thus, it can be rightfully stated that India’s economy has been recuperating steadily, but the economy is still in its nascent stage of recovery. Various factors played an important role in India’s economic revival, for eg.

Partial lockdowns that were placed in the economy, growth budget unveiled by the government, moratoriums that were provided on loans, etc. But one mandatory reason that played the most important role in reviving the economy has been exported. Exports have played a key role in the recovery of the economy and various economic data have shown an improvement in merchandise exports.

According to reports, the Merchandise exports from India had hit a record high of a whopping $35.2 billion in the month of July 2021. It is to be noted that the merchandise exports for the month of July were the highest-ever monthly figure that was ever recorded in India’s history. Compared to last year’s same month i.e. July 2020, the exports have grown by a significant 47.91 percent.

It is to be noted that the pandemic had disrupted economic ties and trade around the world, but according to reports, the Indian exports have gradually grown after the first wave of the Covid-19.

The robust economic data gives rise to a pertinent question, that why are exports such an important facet of the economy? This is due to the fact that the amount of merchandise that a country exports plays an important role in the country’s revenue generation. In retrospect, the robust revenue generation leads to robust economic growth. According to various experts, higher exports help nations to grow rapidly. The rapid growth is seen in terms of GDP, domestic output and foreign exchange.

As aforementioned, exports help in generating revenue in terms of domestic output, GDP, and foreign exchange, but most importantly it facilitates in creating domestic jobs, demand, and infrastructure. Thus, it is quite crucial that countries solemnly maintain export-import balance in order to maintain and provide growth momentum to the economy.

See also  5G Launch Date In India, When will it be Launch in Our City? Airtel, VI, Jio 5G Expected Plans & Features

The crucial role of exports in the economy

Due to all the aforementioned crucial factors, exports are extremely important for the overall economic growth of a country as they give domestic sellers increased access to the market. Given, we live in the era of globalization, major economies around the world are also major exporters. To corroborate this claim, it is to be noted that China is the world’s leading exporter of goods. China’s robust economic exports are followed by the developed countries like US, Germany, and Japan, which themselves are well-developed exporters. Though, India is rising the ranks, it is a major exporter of agricultural products to the world.

As it is known, that exports help sellers get access to the global market, thus it helps maximize their sales and profits. Additionally, it helps in presenting a golden opportunity to capture a good chunk of global market share.

Now given that exports help in generating robust revenues not only for the government but also for individual organizations, it will be pertinent to state that exports help in boosting per capita income. It is to be noted that higher per capita income also helps in generating higher domestic income and demand. Given that demand is boosted due the increased exports, given the current scenario, higher demand in the economy is needed to revive it from its economic slump.

Thus, given that various economies around the world, at the moment, are facing an economic slump, higher exports are the need of the hour. Thus keeping stable diplomatic ties in order to maintain a healthy export-import balance is crucial for all the global economies.

But what if a country’s imports outgrow its exports? In a condition where a country’s imports exceed its exports, there is an indefinite risk of a rising trade deficit. A trade deficit in the economy can have a negative effect on the country’s exchange rate, which can, in turn, lead to the devaluation of the currency. Therefore, maintaining an appropriate balance of imports and exports is important for all countries.

Why India is witnessing record-high exports?

Given aforementioned data, India has been witnessing a record high export trend in recent months. India’s exports have been rising intensively after the first covid wave. This is due to the fact that the global economy is recovering from its one economic slump.

The economic rebound has led to a sharp rise in demand for goods and services in the global market. It is to be noted that the country’s exports are likely to rise further as global trade activity further gains momentum. Additionally, robust government spending and incentives will help in promoting exports which could rise even further.

Secondly, given that various supply-side restrictions are being lifted, the economic ties are being reformed stronger than ever. In this scenario, the pent-up demand to is playing a huge role in reviving the economy. It is worth noting here that exports have remained above $30 billion for the fifth consecutive month. 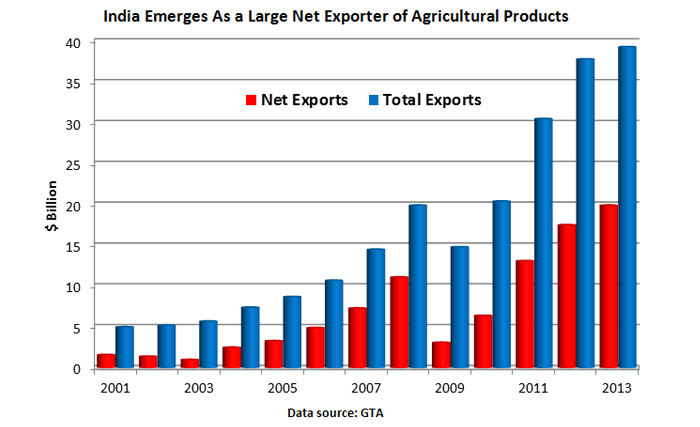 Breaking down the export quota, it is to be noted that the top five commodity groups that were exported by India most during the month of July 2021 were namely petroleum products, which went up by 215 percent, gems and jewelry that went up by a whooping 130 percent, other cereals, that expanded by 70.25 per cent, man-made yarn and fabrics, up by 58 per cent and cotton yarn and fabrics, that were up by 48.02 per cent.

Given all the aforementioned reasons, it is to be noted that rising exports are a good sign for India’s economy at the moment as it needs robust demand to revive the economy. Given that domestic demand currently is subdued due to the threat that the third wave poses, rising global demand might help in providing much-needed demand that is domestically missing.

There is a high possibility for such a proposition as countries are recovering from the Covid-induced economic shock. Thus, the government has planned several fruitful measures to transform India into an export-oriented economy but it needs to take more export-oriented measures in order to fully realize this dream.

5 Years of Insolvency and Bankruptcy Code: What's new and what has changed?