At 9AM on the 27th of August, 2020, Jeff Bezos – the founder and CEO of popular online retail giant, Amazon – witnessed his net worth blow up to USD 205 billion, along with the rest of the world. This is the first time in the history of humankind for an individual’s accumulated assets to cross the USD 200 billion mark, and is approximately USD 90 billion ahead of the world’s second-richest person, Bill Gates. The Microsoft founder is currently valued at USD 116.1 billion.

Before digging into the story behind Bezos’ massive growth financially, it is important to understand the difference between the net worth of a person and “money in the bank.”

According to self-explanatory popular business and finance website Investopedia, net worth equates to the total value of the assets of an institute – either an individual, a corporation, or a collective – and takes into consideration all transactions conducted by the institute. In simpler terms, it is calculated by adding up the values of all assets and/or credit owned by the institute and subtracting all liabilities and/or debt that he/she/it is responsible for.

Net worth is an important economic metric that can help gauge an economy’s health, be it for any kind of institute, and provides a handy capture of the institute’s financial position at that instant. Various experts have concluded that the best way to improve your net worth is by reducing your liabilities and/or growing your assets, either in a state of constancy or continual trend.

On the other hand, it is important to understand that just because an institute is valued at some amount of money, they have said amount of money –no. Net worth is the potential amount of money that an institute can be economically transacted for, while money is whatever economically-valid intermediary form of transaction you have on hand. While actual money is what you can utilize for everyday purposes, various other services like loans and third-party credit take your net worth into consideration.

Bezos’ net worth skyrocketed past the USD 200-billion mark when the share value of Amazon, the online retail giant he founded, surpassed USD 3400 per share. As of 9AM on Thursday, Amazon’s stock (NASDAQ: AMZN) share price hit USD 3403.64, and has been maintaining the trend above the USD 3400 line ever since.

In an interview to Forbes, Jeff had reported that his net worth would have a better outlook and that he would have crossed the two-hundred-billion-dollar milestone quicker, had his divorce not ended with him granting his ex-wife, Mackenzie Scott, a twenty-five percent stake in Amazon. That solid chunk of shares is now worth USD 63 billion. In retrospective, had he not lost that block of shares, he would have hit the contextual milestone in the second half of 2018, when his net worth fluctuated between USD 135 billion and USD 170 billion. 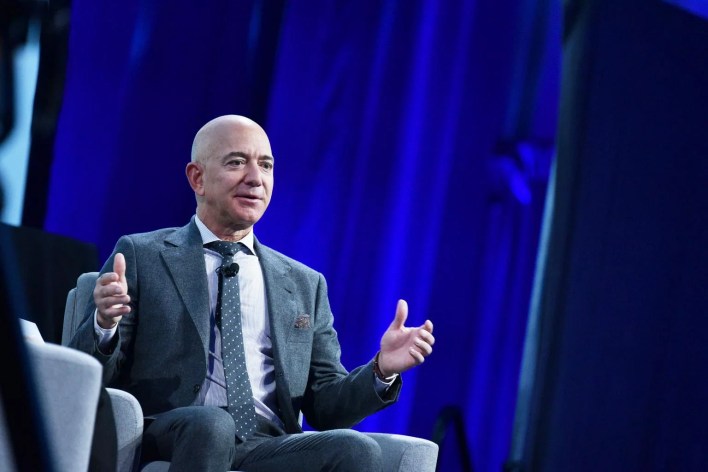 Taking on the mantle:

In comparison to 2019, Jeff’s wealth is up by USD 4.9 billion ten months into 2020, and has already landed him on the other side of the money milestone. The closest anybody has gotten to this mark is Bill Gates, founder of Microsoft. Currently Gates’ net worth lingers around the USD 116-billion mark, a relatively stagnant growth since he hit USD 100-billion in 1999.

If we are to compare Bill’s and Jeff’s net worth values, it is only fair to take into account Gates’ charitable donations and his philanthropic organization, the Bill and Melinda Gates Foundation. Unlike them, Jeff Bezos is not very popular or renowned for his contributions towards the betterment of society.

The Amazon CEO has not signed the Giving Pledge, a program founded by Bill and Melinda Gates and Warren Buffet, in view of improving the generous philanthropic contributions of the ultra-rich and extremely wealth institutions of society. This move was founded as an attempt towards increasing how equally wealth is distributed among the members of our society. It is also notable that his ex-wife, Mackenzie, signed up to be a contributor to the program, leading to increased criticism towards Bezos not contributing more.

A controversial history of donation:

In contrast, the man had launched a USD 2 billion donation fund in September 2018, despite being the only one of the top five richest people that have not signed the Pledge. Mistaken reports of the Bezos Family Foundation being attributed to Jeff had surfaced back in the same year, and it had come to light that the fund was entirely run by his parents, who reported no noteworthy contributions from the man himself.

Bezos has not appeared on the annual list of the United States’ fifty largest donors until the launch of the donation fund, which had been set up to help educate the homeless. At the time, that fund accounted for approximately 1.3% of his income at the time, during 2018.

His notable contributions to society to date include a USD 10 million grant to establish the Bezos Center for Innovation and a USD 15 million donation to Princeton University’s Neuroscience Institute, both in 2011, a USD 2.5 million contribution to Washington United for Marriage in 2012, USD 500,000 to Worldreader in 2013, and USD 1 million in donations to Mary’s Place during 2016 to house the homeless. These contributions are amongst various others as well, yet the trend in relative decrease in the share of contributions with respect to his massive growth in net worth can be clearly distinguished.

Standing at the milestone:

While he may be generously applauded or widely criticized, there is nothing to debate about when it comes to how much work had to be put in by Jeff Bezos in order to reach the line, much less race ahead. A stark contrast can be viewed in the difference between reaching the USD 100 billion and USD 200 billion marks – the first one is a dash to the line, while the next is a marathon to the finish. And Jeff seems to have ran a marathon the entire time.

While he is well-known for founding Amazon and growing it to be the online retail giant it currently is, Jeff also has his hand in a number of cookie jars. He is the owner of the Washington Post, a well-known newspaper in the USA and an example of quality journalism. He is also known for his head-to-head against Elon Musk’s SpaceX as the owner of Blue Origin. Apart from these, he also has a number of various other investments in different companies.

It is no joke that a single man is worth USD 200 billion in our present economy. While this may sound disastrous to some, it is a cursor pointing to how well-developing our global economy is, and that we have come far from bartering and stick trading; the journey may have been long, but we still have a far way to go. And as Jeff Bezos currently showed us what we are capable of, we must focus not on the dash but the marathon.

Good News At The Earliest: Fair Distribution Of COVID-19 Vaccine