The head of the autonomous government, Carrie Lam, assures that it is the “hardest” decision that she has taken in seven months, but “necessary” to control the pandemic

Hong Kong will postpone the legislative elections scheduled for September 6 for a year. The head of the autonomous government, Carrie Lam, has confirmed what had become an open secret this week at the international financial centre. “It is the hardest decision I have made in the last seven months,” she assured at a press conference. The official reason: the COVID-19 pandemic, which this July has seen the largest increase in daily cases in the city since the start of the crisis.

But, for the supporters of the democratic movement, this is a move to prevent the opposition from gaining a majority in the local Parliament for the first time in history, driven by popular discontent against the new National Security law. The Legislative can thus become a bulwark of resistance to pro-Beijing policies.

Protected with a mask and before an image of the bay of Hong Kong at the headquarters of the Autonomous Executive, Lam has assured that the postponement is “necessary” to “protect public health, the lives of the people and guarantee the fairness of the elections”. As she has insisted, her decision does not have any kind of political motivation. The electoral delay until September 5, 2021, he added, has the full support of the central government in Beijing. 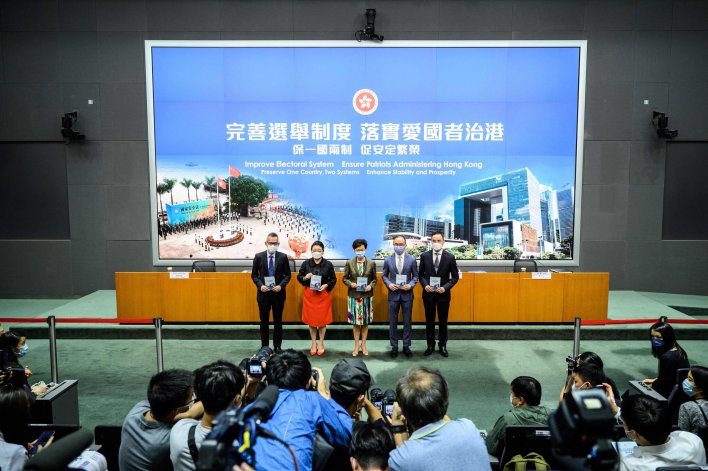 In the last ten days, Hong Kong has exceeded one hundred daily positives.

These are the highest figures recorded in the city of 7.4 million inhabitants since the start of the pandemic, but also a relatively small number compared to other western cities of similar size. In seven months it has accumulated more than 3,000 cases.

The postponement of the elections, the first since the National Security law was passed, creates a legal vacuum: Hong Kong regulations foresee that the legislature will only last four years, which take place next month. Now it will be up to the National People’s Congress, the Chinese Parliament, to decide how to solve it, Lam pointed out, who nevertheless indicated that the most logical thing would be to extend the mandates of the current deputies. This, in itself, would create another question, given that at least three of them had been disqualified for this electoral appointment.

Not for expected the announcement has been received with less fury among the opposition. 22 deputies have insisted, in a joint declaration, that the legislative elections are a pillar of the enclave’s constitutional system. “According to Parliament’s regulations, elections can only be postponed for 14 days,” they recall, “delaying them [more] implies provoking a constitutional crisis.”

The deputies also consider it “urgent” that, after a year of pro-democracy protests, the Legislative Council -the Hong Kong Parliament- “submit to a baptism of public opinion, which is the basis of the city’s governance … The Government and all of society must do everything in their power to ensure that the elections are held as planned. ”

The announcement completes a week in which bad news and action against pro-democracy activism in Hong Kong has come almost every day. On Tuesday, the governing board of the University of Hong Kong had approved the dismissal of law professor Benny Tai, one of the 2014 founders of the Occupy movement – which would trigger the student mobilisation known as the umbrella, predecessor of last year’s massive protests. Tai had served a prison term of months on charges related to those sit-ins. On Wednesday night, the new National Security Police unit detained four student activists, accused of creating a separatist group on social networks. 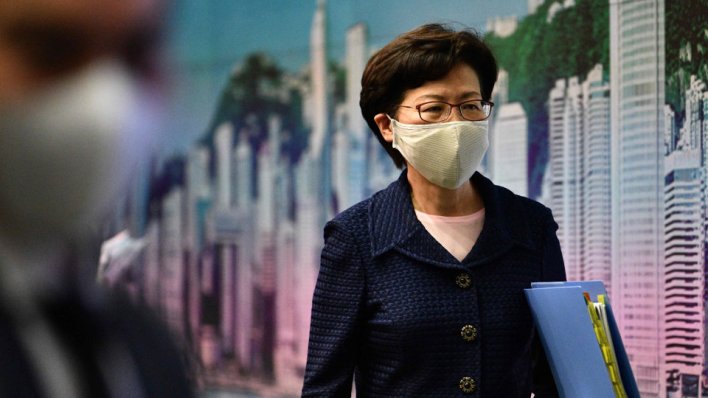 But above all, based on the new National Security law, this Thursday the Electoral Commission disqualified 12 opposition candidates for the legislative elections, among them the former student leader Joshua Wong and three active deputies of the moderate Civic Party.

Their sins, according to officials: having subversive inclinations, criticising the National Security law and trying to get a majority in Parliament that would block any government initiative. After the postponement of the call, it will be up to the Secretary of Justice, Teresa Cheng, to decide in the future if the disqualified candidates can appear at the appointment next year.

The opposition aspired to repeat in September the success of the municipal elections last November when it prevailed in all but one district. Taking the majority in Parliament, however, was a much bigger challenge. The municipal elections are the only elections in Hong Kong where pure universal suffrage is applied. In legislative elections, only half of the 70 seats are decided by direct vote; the rest are selected by union and business groups, which tend to be largely overwhelmed by pro-Chinese candidates.

See also  Everything About The Upcoming West Bengal elections 2021

“This is the most scandalous period of electoral fraud in Hong Kong’s history,” Joshua Wong denounced at a press conference about his disqualification, hours before Lam’s announcement. The 23-year-old activist, whose candidacy had already been invalidated in the municipal elections last November, has assured that the pro-democracy movement will continue to move forward despite the pressure. “Preventing me from running as a candidate is not going to stop the cause in favour of democracy,” he said.

In a similar message posted on social media, another of the vetted candidates, Councilwoman Tiffany Yuen, has written: “I am an individual person, but at the same time I am not a single person… you can disqualify more people tomorrow, but it is impossible to disqualify the entire movement. ”

The White House condemned on Friday the decision of the Hong Kong authorities. According to President Donald Trump’s press secretary, Kayleigh McEnany, the postponement “undermines the democratic processes and freedoms” of the former British colony, the agency France Presse reported.

The possibility of a long electoral postponement, which would lessen the momentum of the pro-democracy movement, had gained strength throughout this week. On Tuesday, a joint statement by the United States and Australia already expressed support for “a free, fair, credible and peaceful election on September 6.” The United Kingdom had also expressed its concern.

Since its entry into force a month ago, Beijing’s draconian National Security law has made its effect on Hong Kong public life more noticeable than even its critics had anticipated. Already hours before it began to apply, two political groups – Demosisto, founded by Wong, and Studentlocalism, in which the four young detainees were active – had announced their dissolution. Many supporters of last year’s protests have deleted their accounts on social networks, posters and flags of public support for this mobilisation.

They have disappeared from the shops that once wore them with pride, and consultations on emigration have increased. Big tech companies have announced that, for the time being at least, they are suspending their collaboration to supply data to the Hong Kong authorities, and others, such as Uber, have announced the suspension of their plans to move their Southeast Asian headquarters from Singapore to the autonomous territory. 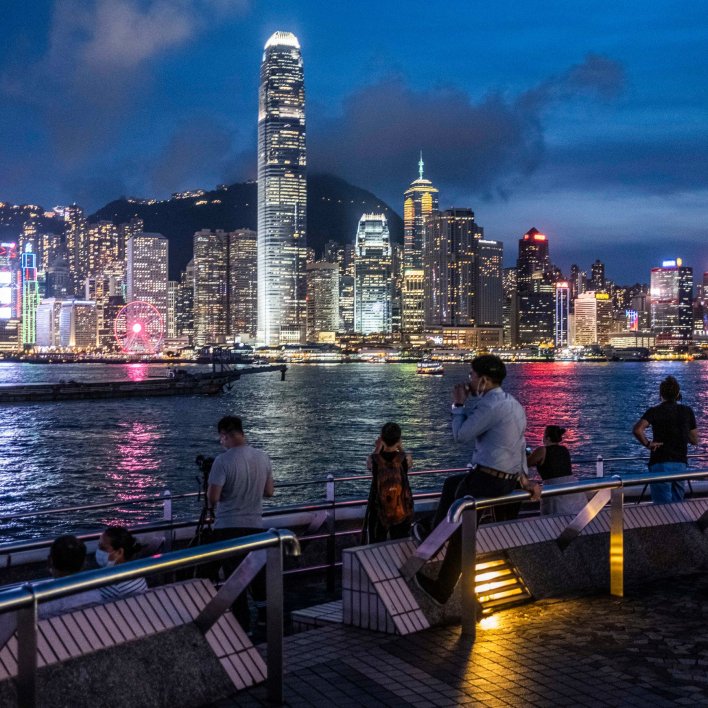 The measure foresees four types of crimes: separatism, terrorism, subversion and collusion with external forces, all of them described in very broad terms and subject to the definitive interpretation of Beijing. Being convicted of any of them carries a minimum of three years in prison and a maximum of life in prison.

The law also creates a new National Security police unit, which will not be subject to Hong Kong law, and allows suspects to be brought into mainland China for prosecution there. According to Reuters reports, Hong Kong Attorney General David Leung has resigned due to discrepancies with local Attorney General Teresa Cheng after being excluded from cases related to the new legislation.

China and the Hong Kong autonomous government say the new law is necessary to protect the enclave’s order and prosperity, which they believe was endangered by protests against Beijing last year. Its defenders maintain that it will be applied to a very small group of people and will not weaken the rule of law or the freedoms that exist in the territory.

On the contrary, its critics perceive it as a tool that puts an end in practice to the wide autonomy that this international financial centre must enjoy according to the agreement between Beijing and London to return the sovereignty of the former British colony to China in 1997.

The law was processed at an unusual speed in Chinese legislative practice. From its announcement to its entry into force, through its drafting, just six weeks passed. It was enacted a day before the anniversary of the transfer of sovereignty, a date that had gradually become an occasion for mass demonstrations against Beijing.

In a statement, Human Rights Watch director for China Sophie Richardson has stated that “postponing the September elections for a year is a cynical measure to cover a political, not health, emergency. This allows the head of the Hong Kong government, Carrie Lam, to deny the people of Hong Kong their right to choose who governs them. Without making any attempt to explore alternative methods of voting, or to ensure that everyone’s right to vote is respected, Lam and her supporters in Beijing simply mask repression under the guise of public health. ”

Sex Dolls Demand Surged in Quarantine but Not Just For Singles