The Japanese ship began to break up this past afternoon. The authorities, which had pumped most of its oil, are towing the bow out to sea. Operations to combat the oil spill are continuing.

What all the experts feared has just happened: the Japanese bulk carrier Wakashio, from which hundreds of tons of diesel and heavy oil have escaped since August 6, broke in two past afternoon. The ship, which left Singapore to reach Brazil, ran aground on July 25 on the Pointe d’Esny coral reef, in the south-east of Mauritius, causing an oil spill on the tourist island of the Indian Ocean.

A little before 4 p.m., the building’s bridge, which had been split since the sinking, was submerged by the swell and broke apart. The emergency services, who expected this scenario, took the decision to remove the wreck from the paradisiacal beaches, soiled with hydrocarbons for several days.

Mauritius’ director of maritime affairs, Alain Donat, told island media that the front part, which represents two-thirds of the vessel, was being towed “very slowly”. The bow must be sunk off Mauritius, “at least 1,000 kilometres” on the high seas, while the aft part of the ship has been left balanced on the breakers for the time being.

The emergency services had fortunately pumped almost all of the tanks still intact before the hull broke up. There would only be a few dozen cubic meters of fuel inside. Blue Economy Minister Sudheer Maudhoo also said there had been no additional oil leaks. However, several testimonies point to new black slicks around the wreck.

Prime Minister Pravind Jugnauth, criticised by the opposition and part of the population, who accuse him of having underestimated the scale of the tragedy, justified himself to AFP: “We could not pump from the start, because the sea was bad. It was also necessary to stabilise the boat. I don’t see the need to apologise.” 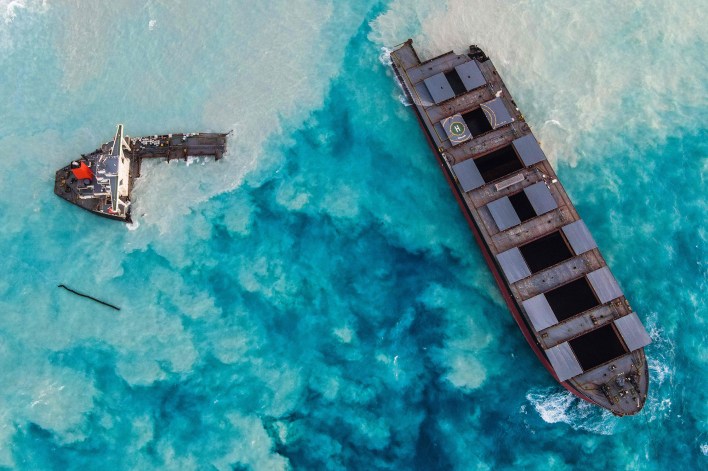 On Friday, the government also suspended popular momentum for volunteers. Hundreds of Mauritians had been making sausages, filled with sugar cane straw and… animal hair and fur, since the start of the disaster, in an attempt to absorb the oil.

See also  Japan reports an outbreak of Bird Flu, orders nationwide disinfection; could this be another example of disbalance, planet Earth, Humans, and over consumerism?

More traditional means, including 1,300 meters of floating dams transported by France from Reunion Island, are trying to contain the rest of the oil slicks, which had decreased for two days. More than twenty tons of material had been sent by boat and plane, as well as ten experts.

Taking advantage of a visit to Reunion Island, Sébastien Lecornu, Minister of Overseas Territories of France, will go to Mauritius on Sunday to “supervise the device put in place to help the Mauritian government” and support the French teams participating in the pumping operations.

India has also sent technical equipment and a team of specialists to Mauritius, our important strategic partner in the Indian Ocean, to help local authorities deal with an environmental crisis after an oil spill from the Japanese ship, a government official told.

They are also due to meet with the Prime Minister of Mauritius to “take stock of the antipollution system”. The crisis unit activated by the prefecture of Reunion is closely monitoring the evolution of the situation.

According to several local media, MW Wakashio, belonging to a Japanese shipowner and flying the Panamanian flag, would have – too close – approached the coast while members of the crew were celebrating a birthday. The authorities did not confirm this hypothesis, nor a rumour about smuggling, and seized documents on board to try to understand the reasons for the sinking. An investigation was launched.

For its part, the owner of the bulk carrier, the Japanese company Nagashiki Shipping, said in a statement “to be deeply aware of [its] responsibilities” and promised to respond “sincerely” to requests for compensation.

It is still too early to accurately assess the damage, but fragile and emblematic sites, such as the islet of Aigrettes, where endemic species live, or the Blue Bay marine park, have been degraded. Several beaches and mangroves were also affected by the oil spill.