The agreement between Israel and the United Arab Emirates makes their secret ties official, aborts the annexation of the West Bank and stands up to the regional threat from Iran.

Far from the epic of Egyptian President Anwar el Sadat’s trip to Jerusalem in 1977, which opened the door to the Camp David Accords, and the accomplice exchange of cigarettes between the Jordanian Monarch Hussein and the Hebrew Prime Minister Isaac Rabin, which sealed the 1994 treaty, Israel and the United Arab Emirates (UAE) have just signed a contract with the mediation of President Donald Trump, a former real estate mogul. The peace of the pragmatists of Benjamin Netanyahu and Mohamed Bin Zayed will not be written with the narrative of the epics, but both the leader of Israel and the Emirati sheikh may have marked a milestone in the strategy of the US allies in the Middle East to contain to Iran.

It remains to be seen if other monarchies in the Gulf, such as Oman or Bahrain, will dare to follow in the footsteps of the Emirates strongman and if Saudi Arabia will one day open an embassy in Tel Aviv, although Tehran has received the diplomatic drift with concern. The joint declaration on Thursday leaves precisely the Arab peace initiative, sponsored by Riyadh for two decades to offer relations to the Jewish state in exchange for ending the occupation.

Bin Zayed has broken with the central principle that there is no room for understanding with Israel without prior recognition of a Palestinian state, in the same way that Trump ended 70 years of international consensus on the status of Jerusalem as a capital shared by two peoples.

Israelis and Emiratis have now pledged to sign a series of economic, cultural, security, tourism or technology agreements aimed at establishing “full normalisation of relations” and ending the open secrecy of their close contacts for 30 years. Israel has had a representative office for an international organization based in Abu Dhabi since 2015 and has been invited to participate in the Universal Exhibition scheduled in Dubai next year.

The director of Mossad (foreign espionage), Yossi Cohen, has travelled discreetly to the Emirates, where in recent months he acquired medical equipment necessary to combat the pandemic in Israel. Planes from Abu Dhabi have landed at Tel Aviv’s Ben Gurion airport with a shipment of health aid against the coronavirus for the Palestinian population. And the Hebrew press reports constant trips by Israeli athletes, officials and businessmen to attend international meetings in Emirati cities.

For the federation of Gulf monarchies, the agreement with the Hebrew State opens the door to the acquisition of state-of-the-art weapons in the United States – for example, F-35 stealth fighters – that Israel usually vetoes to those countries with which it does not maintains relations to shore up the military technological superiority guaranteed by its agreements with Washington.

Netanyahu’s decision to accelerate the annexation of the Jewish settlements and the Jordan Valley settlements in the West Bank has been behind the announcement of normalisation of ties between the two countries. Emirates has found in the paralysis of the extension of Israeli sovereignty to a Palestinian territory occupied since 1967 the opportunity to justify before the Arab world the officialisation of its contacts with the Jewish State. The White House plan for the Middle East presented in January, which authorised the annexation of up to 30% of the West Bank, provided a unique occasion.

It may have been a ploy devised to obtain virtual compensation from Israel before the annexation was completed. But the high political price that Netanyahu will have to pay before his more nationalist electorate – he promised to extend sovereignty for three consecutive elections since April 2019 to monopolise the vote of the settlers – suggests that the prime minister has acted in a purely tactical way. He has accepted the deal with the Emirates after Trump blocked his declaration of partial sovereignty over the West Bank in July.

Netanyahu insisted on Thursday that his electoral promise remains in force, but Trump made it clear hours later at the White House that the issue had now been “off the table” after the “very clever concession offered by Israel.” As Haaretz political analyst Yossi Verter points out, “if Trump is re-elected he will try to add other Arab states to the normalisation circle, and if Democrat Joe Biden wins, even more.” “So the death of annexation can now be officially declared,” he concludes. 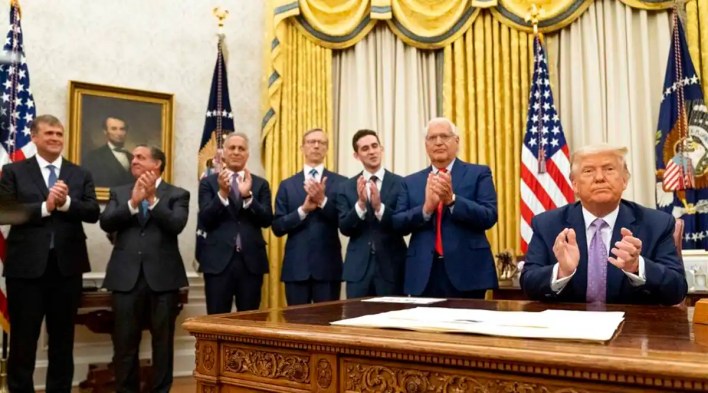 See also  Coinbase acquired Agara, its 1st startup acquisition in India. What good and interesting news it is.

The message of Emirati rapprochement did not come through parallel diplomatic channels, but in full light on a platform published in June in the newspaper Yediot Ahronot, the newspaper with the largest circulation in Israel. The United Arab Emirates ambassador in Washington, Yusef al Otaiba, invited the Netanyahu government to choose between “annexation or normalisation.”

The Israeli response comes two months later, while the prime minister is being questioned with daily demonstrations in the street for the management of the COVID-19 health crisis and the economic recession it has generated. The corruption trial to which he is being subjected for three cases of bribery, fraud and abuse of power also keeps him on the ropes against the centre-left opposition.

His return to the international scene as a veteran statesman, capable of establishing stable relations with the Arab world, has returned the recognition of many Israeli citizens. Netanyahu was now considering breaking the coalition with the centrist Benny Gantz and calling the fourth legislative elections in a year and a half.

The normalisation announcement has elicited mixed reactions in the West Asia. While some Sunni Arab countries are analysing whether the path of diplomatic understanding with Israel is feasible, Iran has warned Emirati leaders that they will be “responsible for the consequences of a dangerous and illegitimate agreement with the Zionist regime.” From Turkey, President Recep Tayyip Erdogan has, in turn, acknowledged that he is considering freezing relations with the UAE.

Egypt has finally come out of its silence on Trump’s peace plan by celebrating the Emirati initiative to “stop the Israel annexation of Palestinian land,” according to a Twitter message from President Abdelfatá al Sisi. Jordan, meanwhile, has stressed that the agreement can help incentivise the end of the occupation. “Denying the rights of the Palestinian people will not bring peace or security to the region” Foreign Minister Ayman Safadi warned in Amman.

Faced with the demographic limitation of the Emirates, where 90% of its population is immigrants, other leaders of the West Asia remain attentive to the voice of the Arab street, always sensitive to the turbulence of the oldest conflict in the region.

The appeals to the Arab League to defend their rights and the apparent reconciliation between the president of the Palestinian Authority, Mahmoud Abbas, and the leader of Hamas, Ismail Haniya, do not hide the impotence of the Palestinians, overwhelmed by the surprise rapprochement between Israel and the United Arab Emirates. Some leaders are already talking about a new Nakba (disaster, after the birth of the Jewish State in 1948) on another black day in the history of a people so many times relegated.

The protests of dozens of demonstrators in East Jerusalem, the West Bank and Gaza did not prevent the discouragement that prevails among the Palestinian population at the news that a third Arab country – after Egypt and Jordan – is preparing to establish relations with the Israeli Government, this time without political counterparts so that they can achieve a state of their own.

The breakdown of the consensus among the Arab nations, which since 2002 have been willing to recognise Israel in exchange for the establishment of a state on the pre-1967 borders, undermines the Palestinian policy of Israeli isolation in the Middle East.

After having rejected a White House peace plan that provided for the annexation of part of their territory, Palestinian officials are trying to contain the damage caused to their diplomatic strategy. The Foreign Minister, Riad al Malki, ordered the immediate withdrawal of his ambassador to the Emirates.

The United Nations has received the agreement to normalise relations with the Emiratis as an eventual step for the resumption of negotiations between Israel and Palestine, which have been paralysed since 2014.

The Bankruptcy of Brexit

China detects COVID-19 in a shipment of Brazilian chickens: an unusual situation