Bangkok is a city under siege. The Thailand government has imposed a state of emergency, there’s a ban on the gathering of more than five people but for a second consecutive night, the protestors defied the ban. They marched through the city, clashed with police officers, and proudly held up the three-finger salute. What do these protestors want?

In 2014, Prayuth Chan-Ocha led a military coup in Thailand. He promulgated a new constitution. He was appointed prime minister by a hand-picked parliament. Five years later he was re-elected. The opposition argued that the 2019 election was rigged but their arguments did not matter because Prayuth Chan-Ocha had a king by his side which brings us to the other crucial demand ‘reforms to the monarchy’. The Thai royal family world has considerable power. The late King Bhumibol was widely revered across the country, but his son, not so much. The current king spends most of the time abroad with his harem. The pro-democracy protest was paused earlier this year on account of the pandemic but the king’s return from Germany seems to reignite it. On Wednesday, as the royal motorcade was passing by, a group of protestors gathered around. They raise a three-finger salute and shouted ‘out taxes’. Seems like a peaceful form of descent but not in Thailand. Two of those protestors have been arrested. Their charges? Attempting violence against the queen. If convicted, they could get the death penalty but the protestors are unfazed.

For those who are wondering, he was quoting Franklin Roosevelt “let us move forward with strong and active faith”. That’s exactly what is happening in Bangkok. An estimated 2000 people were on the streets. Major intersection and the business district occupied; they were chanting for the release do the arrested pro-democracy activists. It did not take long for the right police to arrive a scuffle ensued. Police fired chemical-laced waterfront their cannons but the people refused to leave. They remained on the streets well into the night, such resolved in such large numbers. So, what are the chances of success for these protestors? Two things stand in their way, an equally defined prime minister and a largely conservative population. Prayuth Chan-Ocha is trying to villainize the protestors. He has defended the ban on gatherings and as for his resignation, he has no intention of putting it in papers.

Thailand has imposed a state of emergency in an effort to end three months of protest calling for reforms to the monarchy. The emergency bans gathering of five or more people, the publication of news, and online messages that could jeopardize national security has also been banned. Authorities have been allowed to prohibit people from entering the designated locations, at least 20 activists have been arrested. The protesters are demanding that they want a new constitution, the resignation of the prime minister, and the reduction in the power of the king. A series of a demonstration over three months have brought tens of thousands of people onto the streets of Bangkok. Thai police warned protestors not to regroup after the police in riot gear cleared away the camp that they had set up outside the government house in Bangkok.

See also  Teen Students: Pandemic Has Worst Affected Them, But No One Cares 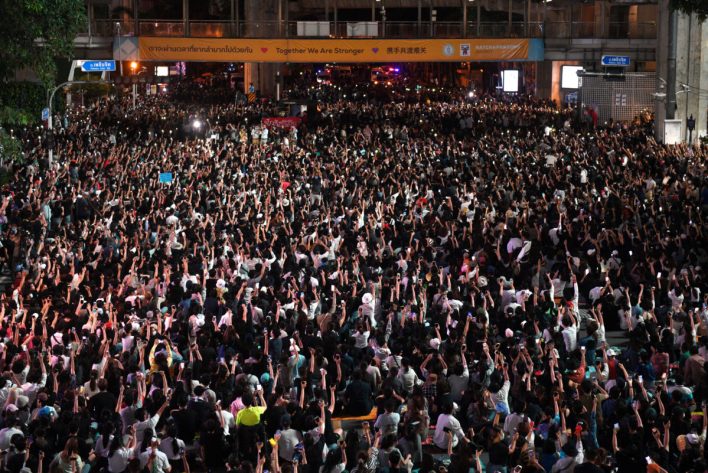 The protest has only been intensifying in Thailand against the government of prime minister Prayuth Chan-Ocha. They began in June last year when Prayuth Chan-Ocha was appointed prime minister by the Thai kind. The protest gained momentum after the dissolution of the popular future-forward party in late February 2020. The party was critical of the Prayuth Chan-Ocha government, there was a pause in the demonstration s when in March a state of emergency was imposed to stop the spread of Covid 19. But since August tens of thousands of protestors have started taking to the streets once again. Protestors have found unique ways to protest using a three-finger salute, a gesture taken from the hunger games franchise. It is a symbol of defiance against an authoritarian state in the franchise has become a symbol of the movement in Thailand.

The democracy movement has become the greatest challenge in years to Thailand’s ruling establishment since the movement started in July, dozens of anti-government activists have been arrested, charged with sedition, and released on bail. This is far beyond what is required, this seems to be a clear rights-abusing emergency decree. These students led protestors to decide to avoid confrontation and they have moved up just outside the office of the prime minister. They have been blockaded, the police have put up concrete barricades, razor wire but the protestors are keeping their spirits up they certainly believe that the momentum of their movement which is pushing for really quite radical demands is still strong. Given what these protestors are asking for, this is a revolutionary moment for Thailand. Many such confrontations in the past have ended violently in this country but this one so far, everyone is trying to keep it civilized, organized and at every point, they are trying to negotiate their way through. Don’t be in any doubt at all about how profound the division is now between these young people who have simply got sick of a way in which politics has been done, the way in which the military involves itself to the politics and the role of the monarchy and the government which literally has its back to the wall.

See also  Public Property Is Getting Destroyed In The Fight Of Two Political Party & Courts In India Are Silent, Has Our Judiciary and Law & Order Become So Impotent? Why is supreme court silent tonight?

Most of the political parties have been quite unsupportive of the students and of the youth. They have got the government parties that have been trying to delay all the demands by the students to come up with a new constitution but they have got some opposition parties that seem to be supporting the students as well but because they have the minorities votes in parliament, they cannot try to push this forward. While many argue that Thailand is slipping towards an absolute monarchy, there are people who seem comfortable with such a change. Staunch loyalists of the Thai royal family. We saw a glimpse of this at the late king’s death anniversary. Thousands of people turned up to pay their respects, so Thailand is at the crossroads right now. How it navigates this period, could probably determine the country’s future for many years to come. Will Thailand sway closer to autocracy or will the protestors prevail? Only time can answer them.