The Railways canceled 369 trains on Saturday because protests against the new military recruitment plan, Agneepath, went on for the fourth day today, PTI reported. 210 mail/express trains and 159 local passenger trains have been canceled. 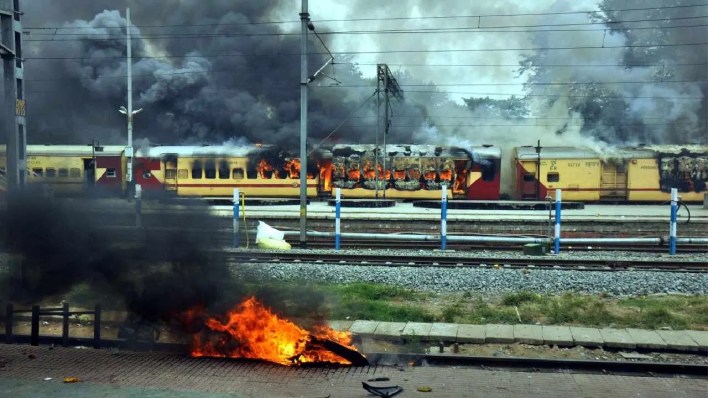 According to a report, two mail/express trains were also partially canceled by the Railways, bringing the total number of trains affected that day to 371.

When the Centre announced the Agneepath scheme, which plans to hire soldiers for four years and then let 75% of them retire without pensions or other social security benefits, young people in different parts of the country responded with violent protests. 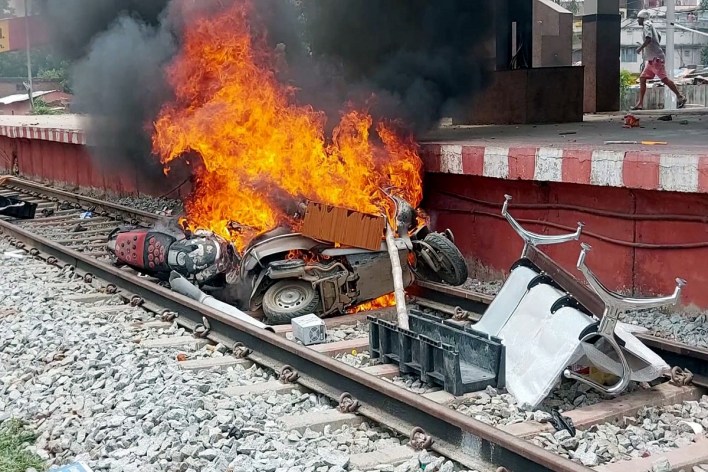 Today, student groups led by the All India Students’ Association (AISA) called for a 24-hour Bihar bandh to protest the Agneepath scheme. The main opposition party in the state, Rashtriya Janata Dal, backed the state-wide bandh, the news agency said.

Students’ groups, led by the All India Students’ Association, have called for a 24-hour bandh in Bihar today to protest the new “Agneepath” recruitment scheme for the armed forces. PTI said that the main opposition party in the state, RJD, agreed with the call for a state-wide bandh.

The president of the Bihar RJD unit, Jagadanand Singh, said that the short-term recruitment plan is not in the best interest of the country’s young people. He said this while supporting the Bihar bandh called for by student groups.

“We back the people protesting against Agneepath recruitment on the streets.

“The new short-term plan for joining the military is not in the best interest of the country’s young people,” Singh said at the party office in Patna.

Even the parties on the left are supporting the protests. 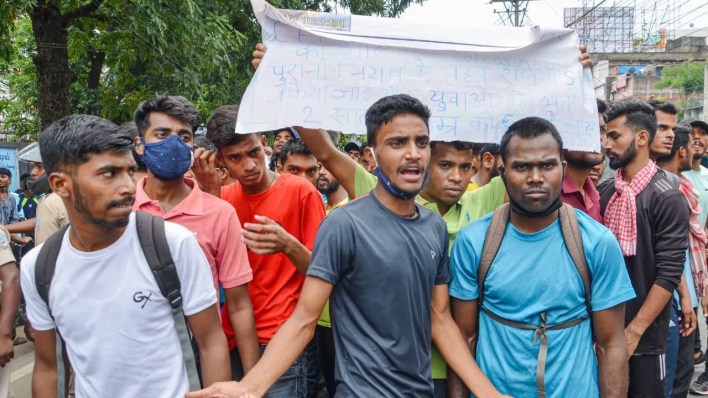 The students have been demanding that the plan, which calls for hiring people for four years in the military and then forcing at least 75% of them to retire without a pension, be scrapped right away.

Chirag Paswan, the leader of the Lok Janshakti Party (LJP), has said that he and other party members will meet with Governor Phagu Chouhan on Saturday and give him a letter asking that the Agneepath scheme be canceled.

At a press conference in Patna, the capital of Bihar, Paswan said, “The Agneepath scheme will make more people unemployed in the country, and it will make more young people unhappy.”

Thursday, the LJP president also wrote to Defence Minister Rajnath Singh to express his worries about the plan.

On Saturday, Circle officer Priti Tripathi said, “A case was filed at 3.30 a.m. against 400 unknown people under the Railway Act, the Indian Penal Code, and the Prevention of Damage to Public Property Act after the station master of the Ballia railway station filed a complaint.” “The 109 people who were arrested were brought before the city magistrate, who put them in jail for 14 days,” she said.

See also  Could PGII & BRI Learn From Each Other's Mistakes Rather Than Be Rivals?

According to the report, the Aligarh Police arrested 30 people, and an FIR was filed against 150 protesters in the Gautam Buddh Nagar district.

Sonia Gandhi says the move has no direction.

Sonia Gandhi, president of the Congress party, criticized the central government led by Narendra Modi over the Agneepath scheme. She called it “pointless” and said it was sad that the Centre has been ignoring what young people have to say.

“It makes me sad that the government didn’t listen to what you said and instead came up with a plan that doesn’t go anywhere,” she said.

“Several veterans and defense experts have also questioned this plan,” she said.

The Congress president also asked young people to fight for their needs in a nonviolent and peaceful way. “I ask you all to protest without violence and in a peaceful way. In her message, she said, “The Indian National Congress is with you.”

What are Agneepath and Agniveer, and how do they work?

This week, Prime Minister Narendra Modi’s Cabinet Committee on Security (CCS), which is in charge of security, gave the go-ahead for a new way to join the Indian Armed Forces.

Once the plan is in place, the average age of the Indian Armed Forces will go down, and the cost of pensions will stop going up. This is because much of the budget went to salaries and help, and long-awaited plans to update the armed forces were put off.

A tour of duty doesn’t seem like a good idea. Please be careful. But it looks like the government is determined to do what it wants. If so, it’s time to consider how this choice will affect the future.

If they pass all the tests, young men and women between the ages of 17 and a half and 21 will be able to join the Army. From then on, they will be called “Agniveers.” These people will be hired right away through schools or recruitment rallies. But they will only be in the military for four years and won’t get a pension.

5G in India: Here's how 5G technology will change your life