The wealth of Asia’s and the third-richest man in the world, Gautam Adani, has witnessed significant growth recently. On Forbes’ Real-Time Billionaires List, the Chairman of the Adani Group has surpassed Amazon founder Jeff Bezos to reclaim the third spot.

Adani’s wealth increased after Indian stocks gained for two weeks in a row and beat Wall Street shares. As a result, he has since climbed back to the 3rd position on Forbes’ Real-Time Billionaires List.

Gautam Adani’s wealth increased by $314 million on Monday, bringing it to $131.9 billion, making him the third richest person in the world according to Forbes, after Bernard Arnault of Louis Vuitton, who maintains the second slot with a net worth of $156.5 billion. Additionally, the Forbes list showed a decrease in Jeff Bezos’ wealth when the company’s shares plunged last Thursday in after-hours trading after it predicted weak holiday sales.

On Monday, the benchmarks for Indian equities rose, extending their advances into the third week. Despite the fact that Mr. Adani outperformed Jeff Bezos, whose net worth was $126.9 billion, the rankings on Forbes have fluctuated recently, reflecting the unrest on the larger global stock markets, with gains and losses. Gautam Adani’s ranking on the list has shifted from second to third to fourth most recently, depending on how Bernard Arnault’s and Jeff Bezos’ fortune has moved due to stock market performance

Gautam Adani’s ranking on the list has shifted from second to third to fourth most recently, depending on how Bernard Arnault’s and Jeff Bezos’ fortune has moved due to stock market performance. The difference in wealth between the three billionaires is around $30 billion.

Elon Musk, the CEO of Tesla and current owner of Twitter, continues to dominate the list with a whopping net worth of $203 billion. As of Monday’s close, he was the only individual on the list to be valued at more than $150 billion.

A report shows that Gautam Adani’s company, in an effort to join the exclusive group of businesses with $1 trillion in market valuation, intends to invest more than $150 billion in industries such as renewable energy, data centres, airports, and healthcare.

The Ahmedabad-based Adani Group is a multinational conglomerate in India.

The Ahmedabad-based Adani Group is a multinational conglomerate in India. Gautam Adani established it as a commodity trading company in 1988, with Adani Enterprises as its flagship.

Among the numerous industries of the Group are port management, renewable energy, electric power generation and transmission, mining, natural gas, airport operations, infrastructure and food processing. As of 2022, the group operates over 100 locations across 70 countries and generates yearly revenues of over $25 billion with a net profit of $2.5 billion. Over 100,000 people work for Adani Group directly and indirectly worldwide. 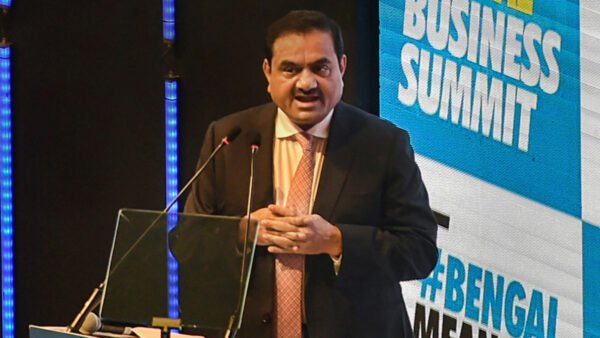 Adani has also pledged to invest up to $70 billion in renewable energy projects in order to become the greatest green energy generator in the world.

Adani Group became the first Indian conglomerate to surpass a market valuation of $100 billion in April 2021. After Reliance Industries and Tata Group, it became the third Indian conglomerate to exceed the $200 billion market cap level in April 2022. Adani Group’s market capitalisation surpassed Tata Group and Reliance Industries in 2022, reaching a high of $270 billion with a market capitalization goal of $1 trillion by 2028.

Besides, he also entered the cement industry significantly in May 2022 when he succeeded in the competition to buy the Indian cement division of Swiss multinational Holcim for $10.5 billion. Adani has also pledged to invest up to $70 billion in renewable energy projects in order to become the greatest green energy generator in the world.

Gautam Adani, 60, dropped out of college in the early 1980s to try his hand in Mumbai’s diamond sector before settling on coal and ports. Since then, his company has diversified into industries as diverse as green energy, cement, media, and data centres, with a focus on those that Prime Minister Narendra Modi sees as essential to achieving India’s long-term economic goals.

The LIC conundrum: 2.65 lakh retail investors left the company in the second quarter