If we thought FY23 would bore some good news for economies and stock markets, the scenario is much bleaker and riskier than the previous year.

For those who have invested heavily in stocks, this is one of the most challenging times in terms of just being able to outdo the stock market volatility and gauge when to exit a particular stock and what stock to keep invested in and to include in one’s financial portfolio.

When it comes to stock markets, the most important key in terms of investing is to invest in stocks of large well, established companies; the example of the same are some of the favourites like Reliance, Adani Group, Mittals etc.

But here is the cautionary approach; of late, the Adani Group of Companies have been consistently garnering headlines for their business acquisitions and deals.

The group is now foraying into verticals and sectors that are not their core businesses, and hence the fact is that sitting at the top of the Indian stock market ecosystem risk curve are the Adani stocks. Now, if one has bought Adani stocks or studied the stocks, one would know that its PE ratio is very high, and the rate at which the PE ratio of its stocks has risen is also tremendous.

Another significant risk in Adani stocks is the high debt ratio!

To give some perspective, look at the table below – 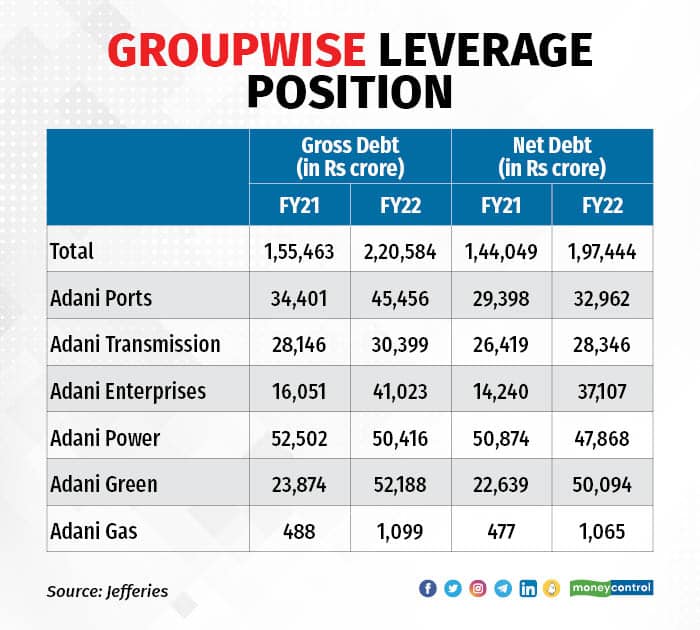 The buzz in the market is that Adani group is all set to come out with an FPO (Follow On Public Offer), which is just another way to raise more money through the market.

The question that comes to mind is if it plans to come out with its FPO, will it further up the risk for Adani Stocks?

Here are some critical questions that need to be asked

1. How risky are Adani Stocks?

2. If Adani’s companies default on their debt, will it have a crushing effect on the Indian stock markets?

3. How likely is the default scenario of each of the Adani companies?

4. What can an investor do to lower their risk?

5. What options do investors have?

We will address each of these questions- 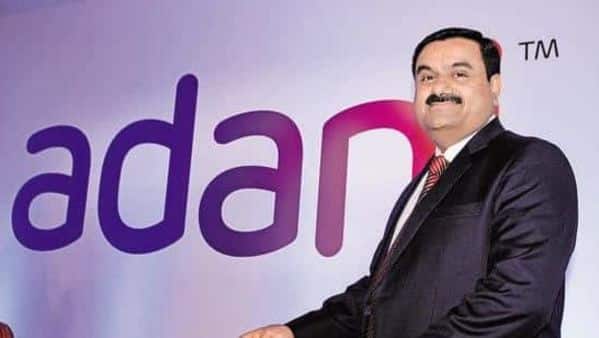 How Risky are Adani Stocks?

Firstly, as mentioned above and shown via the chart – the debt of each of the Adani companies has been growing YOY, and this is the case with all its companies and not just one or two.

Also, if one were to look at the long-term history of Adani group companies, let us consider the last ten years’ data – the gross debt has been going up YOY.

A legitimate question that would come to the mind of investors is that it is ok to borrow money or debt as long as the company can repay the same, but the point to consider here is that for any company to repay its debt, it has to –

Now the problem with the Adani Group is that it is hyper-complicated, and it is challenging to analyze individual-level numbers for every single company it has.

However, if one studies its financial ratios, then one can get a sense of whether they are on the right track or not.

But the first thing that one would notice is that ROE (Return on Investment) which is used to gauge whether the company is profitable or not.

In the case of the Adani Group of Companies, the ROE is not playing out as of now.

Another ratio to gauge is the ROCE, Return on Capital which is the cost at which the company has risen its capital, most likely through a loan.

Hence it indicates that the Adani group is not utilizing debt as effectively as it should.

In fact, the most crucial point to note is that Adani Group’s debt has more than doubled in FY 22, even though the revenues have gone up by more than 75%, which means that they are facing a problem with profits.

In other words, the Adani group is not currently able to make a sufficient profit margin. 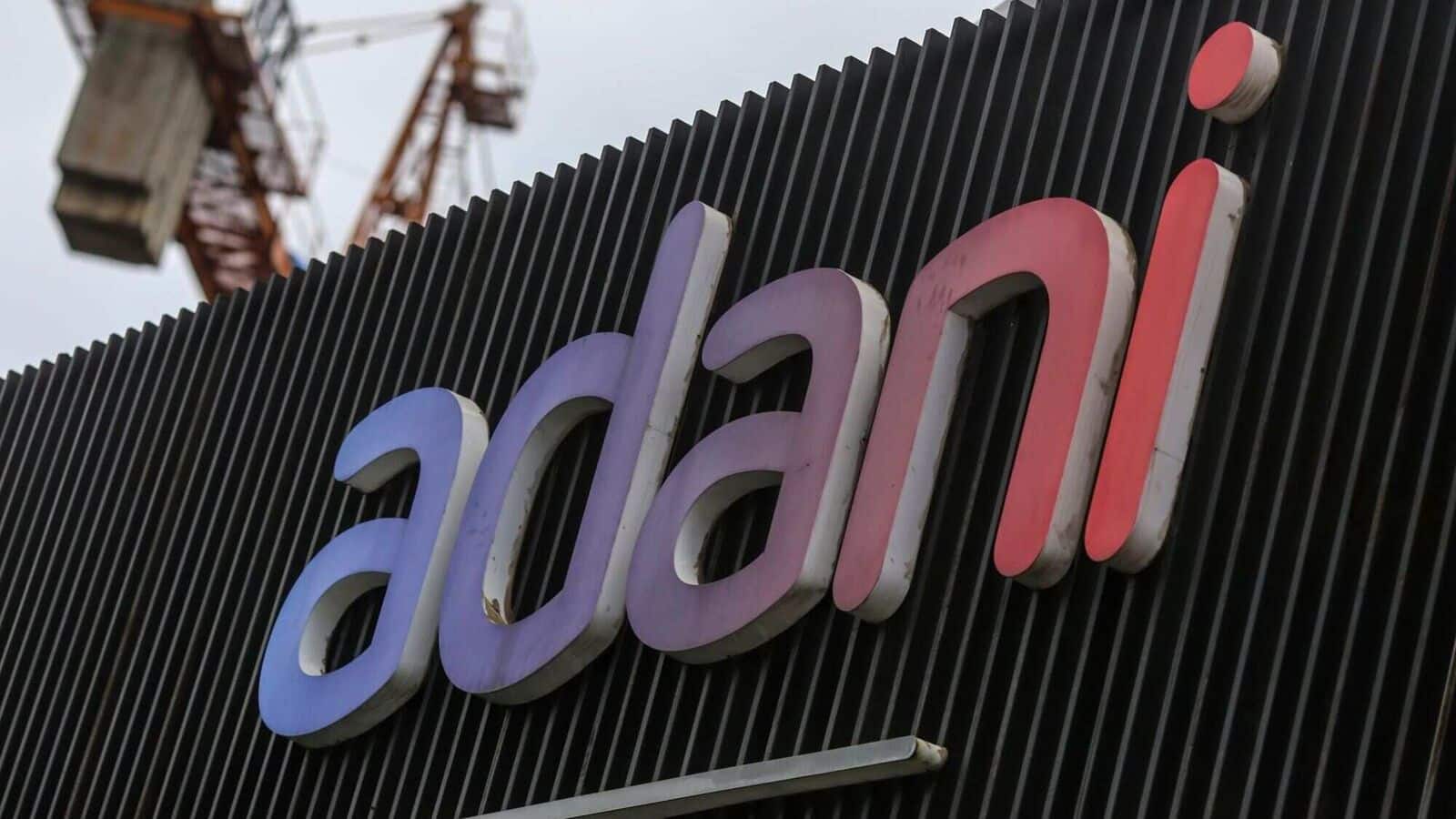 2. If Adani’s companies default on their debt, will it have a crushing effect on the Indian stock markets?

3. How likely is the default scenario of each of the Adani companies?

The Adani group has recently jumped into the infrastructure sector – ports, airports, roads and hence it is natural that they will have to take financing for the same, and over a period of time, these investments will turn profitable, hence what could be a problem?

The answer to this is simple; this is not a small company we are talking about. We are talking about one of India’s largest and most prominent companies that have already done and created a lot of other infrastructure projects.

And therefore, they should already have been making profits from them, and hence they should have utilized this money to grow their other business projects organically.

However, this is not happening and going by the strategies that the Adani’s have been implementing; they are instead raising more money through and from the market solely through debt expansion.

And this is where the waters deepen and become more treacherous.

It has been spelt in the media that Adani is looking to come out with their FPO in FY23, which is focused on raising up to Rs. 20,000 crores, and this is not a QIP (Qualified Institutional Placement).

Why this matters to an investor is simply because an FPO allows a company to sell existing equity to new retail investors.

While a QIP is a way for listed companies to raise capital by issuing equity to qualified institutional investors, which is a more responsible method of selling existing stocks.

It is essential to understand this – in the last ten years, there have been just 4 FPOs in India compared to about 150 rights issues, according to market information provider Primedatabase, while the number of QIPs is roughly 250 in these ten years.

Hence, it is very rare for a company of this size to go for an FPO, and they instead go via the QIP route.

It is also the first time that the Adani Group of Companies is coming out with an FPO.

Thus if Adani enterprises manage to raise the entire Rs. 20 000 crores, it will make the share sale the country’s biggest FPO to date.

This record is currently held by Yes Bank, which in July 2020 raised Rs. 15000 crores through an FPO, and the stock market performance thereafter was dismal.

The other important question here is where the FPO money will be used.

Adani says they will primarily use this money to build two other businesses, Green Energy Business and Digital Business.

What is the risk with Adani Stocks?

The Adani Group of companies have been more dominant in infrastructure-based businesses and has been doing this for a while now.

Hence we can safely say that they have built some expertise in this business, but now the current plan of the Adani Group is to expand their business to new spaces and verticals that already have well-established players.

This is important to consider because if one talks about infrastructure projects in India, there are few players, and there is no competition from foreign businesses.

But if Adani were to enter space like digital business and OTT platforms, they would have stiff competition from the likes of Amazon, Facebook, Google, etc., which are multinational global giants.

Also, when FPOs are launched in the market, they create a lot of excitement and demand buzz since they are given at a discount to the investors, and hence there are a lot of positive outlooks offered towards an FPO launch.

Now, if Adani’s cannot generate profits from the FPO money towards the businesses they have chosen to invest in – Green Energy Business, Digital Business- then there is a definite risk that they attract.

Now predominantly the world over and also in India, it has been observed that The respective governments of different countries have bailed out financial institutions like Banks.

It happened in the United States in the year 2008 when Morgan Stanley and other such big names and also in India when banks, for example, recently we had Yes Bank that was going under and many other banks that have gone bust the government has come to their aid.

But the reason why the governments do that is that they have the potential to bust the very financial backbone of the economy and the markets of the country.

However, there have been a few cases of governments bailing out companies example to consider here is Reliance communication. It was not bailed out; it was considered bankrupt!

What Happens If Adani Group Gets Into Debt Trouble?

Also, if the Adani’s do get into trouble, is there any other option that they can work out the answer to this is – yes!

It likely happens via restructuring of loans but as equity investors, will we ever get to know this reasonably quickly? The answer is No!

And the reason is straightforward: if such a piece of information comes out in the public domain, it will trigger a massive sale of the stocks of that company, the stock price will tank, and so will the company’s valuation.

Therefore, sensitive information like this comes out only at the last moment when everything has already happened, so who is impacted the most in such a situation – it is the retail investors!

4. What can an investor do to lower their risk?

5. What options do investors have?

The answer to the above questions is that an investor can look at investing in corporate debt or Bonds of some good companies – Bajaj Finance Limited etc.

Conclusion: The level of debt the Adani Group of Companies is sitting on is fundamental to consider if you are a retail investor. If your risk appetite is minimum, it is better to understand the basic facts before investing.

JPMorgan- Surveyed Investors Claim This Tech Stock As Their Favourite For 2023; Surprised Many!