The government would convert the accumulated interest liability for Vodafone Idea’s deferred debt of Rs 16,133 crore into stock.

The Union government would soon be the largest shareholder in Vodafone Idea Limited (Vi). The government will hold about 33 percent of the company after converting the collected interest on deferred payments into equity. By virtue of Section 62(4) of the Companies Act of 2013, the government will convert the Rs 16,133 crore in interest liabilities of the telecom industry into equity. The deeply indebted telecom corporation will be helped in raising the required capital by this action.

“The government is almost ready to acquire 33% of Vodafone Idea. The conversion of fees would be completed soon, according to a government representative.
After conversion to equity, the telecom’s promoters, Vodafone Plc in the UK and Aditya Birla Group (ABG) in India, will collectively own around 50% of the company. About 33 percent of the Company will be owned by the Union government. The remaining shares of the Company would be held by the general public. The representative pointed out that SEBI, or the Securities and Exchange Board of India, had not yet given its final permission.

Any changes to the shareholding structure following the equity conversion shall be taken into account by the corporation. The Union government will own equity in the enterprise under public ownership rather than serving as a promoter. According to the person speaking, it won’t have a representative on the telecom operator’s board.

Earlier in January, Vodafone Idea CEO Ravinder Takkar announced that the company has decided to convert government dues into equity as part of the telecom reforms package. The Company had already stated that less than 35.8% of the total shares will be held by the government.

Aditya Birla Group and Vodafone Group Plc invested Rs 4,500 crore in stock in March, bringing their combined holdings up to 74.9% of the market.

The Rs 8,837 crore in AGR-related obligations for the fiscal years 2018 and 2019 would be paid by Vodafone Idea in six equal annual instalments starting on March 31, 2026. The board of directors of the company has authorised “exercising the option of delaying the AGR related dues by a duration of four years with immediate effect,” according to Vodafone Idea.

Before the 5G frequency airwaves are put up for sale, Vodafone Group Plc will add an additional Rs 436 crore to Vodafone Idea through shares or warrants. The Company has raised money twice in the past two months. A promoter group entity would receive 42.7 million shares or warrants from Vodafone Idea for a total of Rs 436.21 crore at an issue price of Rs 10.20 per share, according to a corporate notification.

The business must secure outside capital after the equity conversion is finished. The third-largest telco in the nation will recover, according to the government. The person added, “Once Vodafone Idea’s balance sheet improves, the Union government would dilute its stock share in the company.”

Before the India 5G auction, the Vodafone group will invest Rs 436 crore in Vi. After receiving an investment of Rs 4,500 crore from its promoters, the Indian Company has raised money twice in the past two months.

Through equity shares or warrants, Vodafone Group Plc will invest an extra Rs 436 crore in Vodafone Idea (Vi). In a board meeting on Wednesday, the fundraiser was approved.

Following the infusion of Rs 4,500 crore by the promoters, Vodafone Group Plc and the Aditya Birla group, the Company has raised a second round of financing in the past two months. The most recent capital round occurred before the 5G spectrum airwaves were auctioned.

According to a company notification, Vodafone Idea would issue 42.7 million shares or warrants to a promoter group business for a total of Rs 436.21 crore at an issue price of Rs 10.20 per share.

Vi approved a Rs 4,500 crore fund-raise in March, with the two promoters contributing. The Aditya Birla group contributed Rs. 1,125 crore, while Vodafone Group invested approximately Rs. 3,375 crore. The business hasn’t been successful in raising money from any outside investors, though, thus far.

The promoters hold 74.999 percent of Vodafone Idea. This will decrease to 50% once the government acquires a stake worth 33 percent of the Company.

In January, the telco planned to issue shares to the government after converting interest on deferred liabilities into equity. The conversion of interest, with a net present value of Rs. 16,000 crore, into government equity, will be included in this. The Company’s request has been granted by the Department of Telecommunications. The government is also excluded from making an open offer to Vi’s shareholders after the share issuance, according to stock market regulator Securities and Exchange Board of India. According to a media report, the debt conversion would occur two to three weeks before the 5G auction. 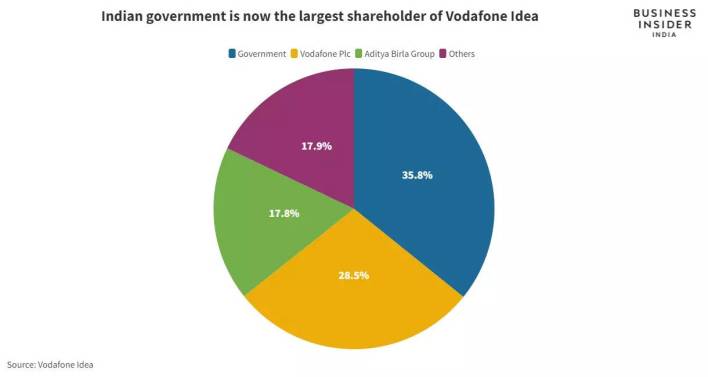 Vodafone Idea announced that it would use the option to postpone the payment of AGR-related debt for four years, totalling Rs 8836 crore. Ahead of the 5G spectrum auctions, the Company’s board has approved funding Rs. 436.21 crore from a UK partner.

Following two significant announcements anticipated to provide the struggling Vodafone Idea (Vi) a boost ahead of the upcoming 5G spectrum auctions, shares of the business will be in the limelight.

Vodafone Idea (Vi), a joint venture between Aditya Birla Group and Vodafone UK, announced that its board had approved a 436.21 crore rupee (Rs 10.20) borrowing from its parent company in the UK. The cash-strapped corporation chose it as it intends to increase network investment and get ready for upcoming 5G spectrum auctions.

The corporation claims that it will raise capital by issuing warrants or shares that can be converted into equity shares.

The Vodafone Idea Limited Board of Directors approved, among other things, the raising of up to Rs. 436.21 crore through the issuance of up to 42,76,56,421 equity shares with a face value of Rs. 10 each, or up to 42,76,56,421 warrants convertible into equity shares, to Euro Pacific Securities Ltd., a Vodafone Group entity and the Company’s promoter, on June 22, 2022. (ICDR Regulations).
The key date for determining the Preferential Issue’s floor price in either scenario is June 15, 2022, in accordance with the ICDR Regulations, Vi said in a filing with the exchange on Wednesday.

Vodafone Idea further declared that it would use its option to postpone the payment of AGR-related debts totalling Rs 8,837 crores for four years.

According to information in a BSE, in a letter to the telco dated June 15, 2022, the Department of Telecommunications (DoT) offered a four-year moratorium for all AGR-related obligations up to Financial Year 2018–19 that were not covered by the Supreme Court order dated September 1, 2020, which could be exercised within 15 days, or by June 30, 2022.

The filing states that under the aforementioned DoT Letter, the Company is also given the option to convert interest payments due on these AGR-related obligations into equity over the course of 90 days from the date of the prior DoT letter.

“We would like to inform you that, in accordance with the DoT mentioned above Letter, the Board of Directors of the Company approved the exercise of the option to defer the AGR-related dues by a term of four years with immediate effect at its meeting held today, i.e., June 22, 2022. The statement further stated that the amount of AGR-related obligations totals Rs. 8,836.70 crores, as stated in the aforementioned DoT Letter.