India’s stock markets experienced their worst day since March 2020; how to handle?

Indian stock markets had their worst day since march 2020.

According to analysts, corporate results for the three months ending in December did not give any cause for celebration. In the previous four sessions of losses, technology stocks have been the poorest performers. 100 NSE stocks hit a new 52 week low which is worst since March 2020.

On Friday, India’s main indexes fell for the first time in eight weeks, driven by losses in financial and technology sectors, as investors worried about inflation and the US Federal Reserve’s policy tightening. These concerns outnumbered the positive component of solid results from Hindustan Unilever, a fast-moving consumer goods (FMCG) behemoth.

After falling for four consecutive days, the Sensex and Nifty both reported a weekly loss of around 3.5 percent. This is the most significant weekly drop since the week ending November 26.

According to analysts, corporate results for the three months ending in December did not give any cause for celebration. In the previous four sessions of losses, technology stocks have been the poorest performers.

“In America, the 10-year treasury bond yield broke over the projected 1.8 percent barrier level this week,” said Christopher Wood, chief global equities strategist at Jefferies, in his most recent weekly letter to clients. “The Federal Reserve’s balance sheet, which is forecast to surpass $8.9 trillion by the end of March, has emerged as a prominent market focus.”

The highest gainer on the Sensex was Hindustan Unilever, which jumped 2.7 percent, followed by Maruti Suzuki India, which increased 2 percent.

Among sectors, the Nifty IT index fell 7% last week, its worst weekly drop since March 2020.

See also  Jina Choi, SF Regional Director of the SEC, is coming to Disrupt to talk ICOs and more

After four days of losses, the Nifty may receive some relief from technical viewpoint.

If the Nifty maintains its current level of 17,600 in the next sessions, it is expected to rebound to 18,100-18,200 “Nagaraj Shetti, a technical research analyst at HDFC Securities, echoed this sentiment.

According to Shetti, the drop in the previous four sessions is only a retracement of the recent increase.

The risk-off mood grows as the Sensex has its worst day in three months.

On Monday, Indian shares fell 2.6 percent, the worst one-day decline in three months, as risk-off sentiment spread throughout global financial markets. Investors dumped developing market equities due to concerns that the US Federal Reserve is on track to drain liquidity that has propelled markets to new highs at a quicker rate. The possibility of a Russian invasion on Ukraine has heightened fears, sending the dollar higher and bringing Bitcoin lower.

Following a 6.1 percent drop in the last five days, analysts believe markets are oversold. After the Fed’s two-day meeting finishes on Wednesday, they added, a short-term recovery is expected unless the US central bank turns more hawkish than the market thinks, which may exacerbate foreign money outflows. Due to Republic Day, India’s financial markets will be closed on Wednesday.

In the stock market, the Volatility Index, or VIX, a fear indicator, jumped over 21% in one day, the biggest one-day gain since November 26, signalling traders expect the market to face increased dangers in the near future. On Monday, the rupee fell 17 paise to 74.60 versus the dollar, reflecting the jitters in the stock market. The Stoxx Europe 600 index fell 2.3 percent on Monday as geopolitical threats contributed to investors’ concerns. The MSCI Asia Pacific index lost 1.2 percent, excluding Japan.

What is the best thing one can do during a correction?

There is a big difference between the market and the economy. If anyone says that market corrections come out of nowhere, they do not know how to read stock charts.

Corrections happen because institutional selling and that is always visible on the charts, they can’t hide it even if they tried.

As an investor it should be learned to look for corrections to a market in order to get an edge, and that’s exactly what investors should be doing right now. If there’s an accumulation phase, and a selling is a clear indication that people are taking positions ,which is also visible on the charts, there is an opportunity to buy and that’s exactly what smart investors are doing.

Just because a stock is down 50-60% from highs, does not mean it is on discount. Do not catch a falling knife.

Most people only look at earnings, and if you are in the market for a company with earnings but at low prices, you need to step back and look at the whole picture. 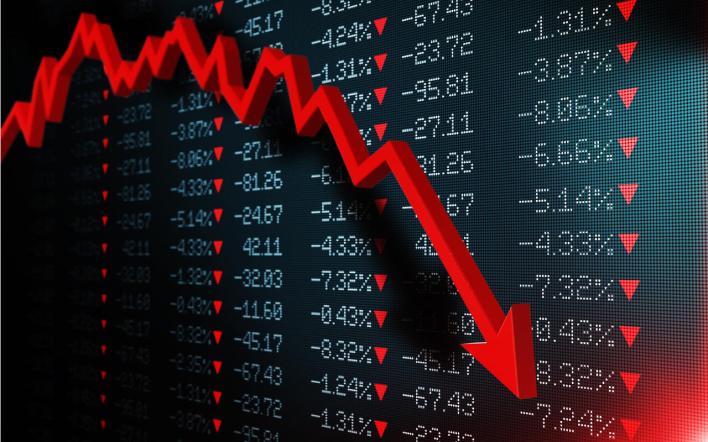 However, one should not expect days like this everyday ,that would require a big trigger like most people thinking that the world is coming to an end.

The markets are in oversold category right now so it is possible to see a slight bounce but not for too long.. The technical picture is currently neutral.

The market moved into oversold territory on Wednesday and Thursday. On Friday, there is a potential for some upside momentum, which could be a bit of a short-term opportunity. The market also remains in an oversold category. Volume is up this week which is a positive.

Would be important to watch this week’s action and how the markets close on Friday. But if the markets correct in the next few weeks and you get a buy signal, then it’s a very good buying opportunity.

That being said, the current status of the stock market is Downtrend.

How low will it go? Only time travellers and fortune tellers know.

Do not panic, follow your strategy,load up on SIPs(Systematic Investment plans).

The markets always come back. They have come back from the great depression of 1929, the great recession of 2008, the fastest crash ever of 2020 and more.

Many retail investors  think that stocks at their 52 week low are good buys.

The real money is made by buying stocks that are making new highs, not new lows.

Here is William O’Neil’s greatest quote about it-

Stocks that create a new 52 week low are there for a reason. The reason is that institutions are selling those stocks.

Whereas stocks that are at 52 week highs are there for a reason – institutions are buying those stocks.

A smart investor would want to be with the institutions and not against them. However it is also very important to cut your losses when you buy stocks making new highs.

And several other considerations are to be looked at.

Overall, it is a pretty typical week. some big moves had been seen, some strong rallies and some good declines. There are some oversold spots which the market has to work its way through.

Swiggy To Acquire Dineout In A $200 Mn Deal; To Take On Zomato's Dine-In Biz