According to people familiar with the meetings, Credit Suisse officials are meeting with key investors to reassure them amid growing fears over the Swiss lender’s financial well-being.

One government official involved in the negotiations told the Financial Times that the bank’s groups were actively interacting with its prime customers and counter parties over the weekend and were receiving “messages of support” from premier investors.

Spreads on the bank’s credit default swaps (C.D.S.), which protect investors from financial risks like default, increased substantially on Friday.

They came after rumors that the Swiss lender was trying to raise cash, citing a message from its C.E.O. Ulrich Koerner.

According to persons familiar with the conversations, Credit Suisse officials are meeting with the bank’s biggest investors to reassure them about the Swiss lender’s financial health.

According to one executive participating in the conversations, teams at the bank were actively communicating with its key clients and counterparties over the weekend, and they were receiving “messages of support” from senior investors.

Credit Suisse’s stock hit new lows last week. Year to date, the stock is down nearly 55%.
Spreads on the bank’s credit default swaps (C.D.S.), which protect investors from financial risks like default, increased majorly on Friday. They came after rumors that the Swiss lender was trying to raise cash, citing a message from its C.E.O. Ulrich Koerner.

According to the Sources, the executive denied reports that the Swiss bank had before approached its investors about potentially raising more capital, insisting that Credit Suisse “was trying to avoid such a move with its share price at record lows and higher borrowing costs due to rating downgrades.”

According to sources, the bank is in the midst of reviewing its strategy, which includes prospective divestitures and asset sales, and an announcement is probable on October 27, when the bank reports its third-quarter results. Credit Suisse has been in negotiations with investors to raise capital with multiple eventualities in mind, including the chances of the bank “mostly” exiting the U.S. market.

According to John Vail, chief global strategist at Nikko Asset Management, on CNBC’s “Squawk Box Asia” on Monday, the news from Credit Suisse indicates a “rocky moment” ahead, but it probably lead to a change in the direction of the U.S. Federal Reserve.

“The silver lining at the end of this era is that central banks will most probable begin to relax at some point because both inflation and financial conditions deteriorate significantly,” Vail added. “I don’t think it’s the end of the world.”

“We struggle to envision something systemic,” Citi analysts stated in a study regarding “a big European bank’s” probable”contagion impact” on U.S. institutions. Credit Suisse was not mentioned by the analysts.

“We appreciate the nature of the fears, but the current position is a night and day difference from 2007 since the balance sheets are fundamentally different in terms of capital and liquidity,” the study added, alluding to the 2007 financial crisis.

“We feel U.S. bank equities are highly appealing here,” according to the research. Please use the sharing tools accessible through the share button located at the top or side of each article. Copying articles to distribute to others is a violation of the FT.com Terms and Conditions and Copyright Policy. To purchase more rights, contact [email protected] Subscribers can use the gift article service to distribute up to 10 or 20 articles every month.

Executives called after spreads on the bank’s credit default swaps, which give insurance against a firm defaulting, jumped dramatically on Friday, reflecting market concerns about the bank’s financial health.

“This weekend, the teams are aggressively interacting with our top clients and counterparties,” a Credit Suisse official participating in the negotiations said. “We’re getting calls from our top investors with expressions of encouragement.”

The C.E.O. refuted recent news reports that Credit Suisse had previously approached investors about potentially raising more capital, stressing that the bank was trying to avoid such a move with its share price at all-time lows and increased borrowing costs like a result of rating downgrades.

After Credit Suisse’s share price fell more than 25% last month to below SFr4, C.E.O. Ulrich Körner issued a company-wide email on Friday to reassure employees about the bank’s capital position and liquidity. 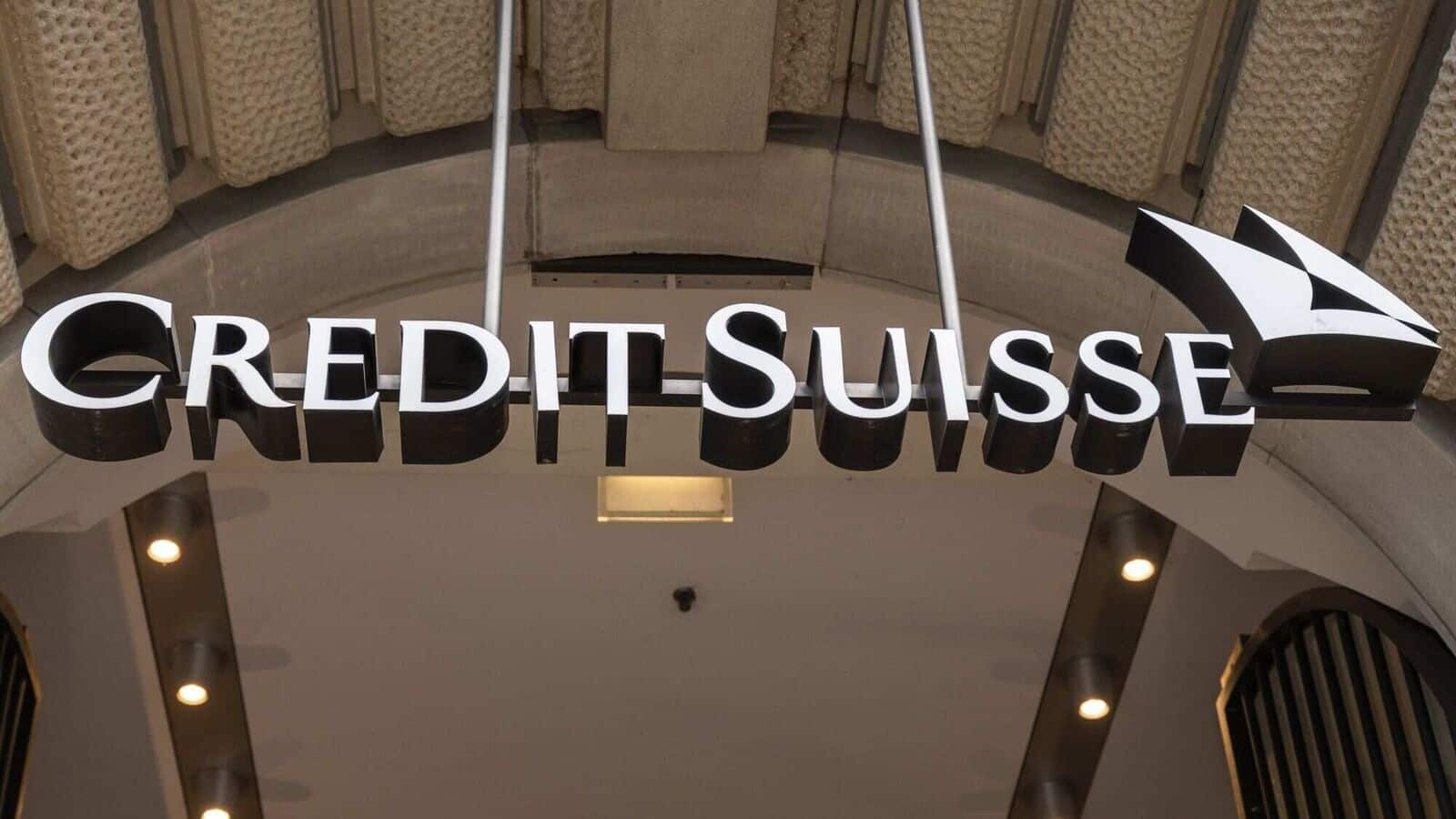 His action coincided with a strong spike in credit default swaps, a measure of investor risk aversion, which has risen more than 50 basis points in the last two weeks, reaching 250bp on Friday.

Following social media concerns concerning the bank’s financial health, employees were advised in a second briefing letter delivered to Credit Suisse officials on Sunday:”A point of concern for many stakeholders, including media speculation, continues to be our capitalization and financial strength.”

“Our stance on this is unequivocal. Credit Suisse has a solid capital and liquidity position, in addition to a healthy balance sheet. This fact is unaffected by changes in stock prices.”

According to a top executive at a business contacted by Credit Suisse, the lender is “the worst large bank in Europe,” although it is not in immediate risk.

“We are not holding meetings on this subject,” he explained. “I don’t believe there is a crisis.” According to the C.E.O., the bank’s decreasing share price indicates its serious problems and the absence of a clear solution.

While the Swiss bank is extremely profitable, and the worldwide private bank has a stellar reputation, potential investors and purchasers are concerned that the investment banking division may have concealed significant liabilities.

Körner and the bank’s board, which is chaired by another former UBS CEO, Axel Lehmann, are scheduled to deliver a strategy to reform the firm in order to address investor concerns on October 27, along with third-quarter results.

Analysts at Deutsche Bank projected last month that the reorganization would leave Credit Suisse with an SFr4 billion hole in its capital position.

“We will be carrying out asset sales and divestitures merely to support this really major pivot we plan to make towards a stable business,” said a senior official from the bank who participated in investor calls.

Credit Suisse did not respond to requests for comment.

Korner, who formerly led Credit Suisse’s asset management section, was named CEO in the summer with a directive to downsize the group’s investment bank and slash expenditures, steps that are anticipated to result in thousands of job cuts.

The board’s current idea, according to the Financial Times, is to divide the investment bank into three and resurrect a “bad bank” holding pen for high-risk assets and business units scheduled for liquidation.

“There will undoubtedly be more commotion in the markets and the press between now and the end of October,” Körner wrote on Friday. “All I can advise you is to be disciplined and close to your clients and coworkers the most possible.” Uncertainty over the bank’s future has already resulted in the resignation of a number of executives. Jens Welter, co-head of global banking, is the most recent high-profile defector, agreeing to join Citigroup.

Also, IN 2017, Credit Suisse CSGN.S abandoned plans to raise funds by listing a percentage of its Swiss business and instead sold new shares worth around 4 billion Swiss francs ($4 billion) to restore its financial strength to parity with rivals.

The decision should alleviate any remaining concerns about the capital position of Switzerland’s second-largest bank, which is rebounding from back-to-back annual losses as it restructures under Chief Executive Tidjane Thiam.

The 4 billion franc rights issuance comes after a 6 billion franc Cash Call in late 2015 and asset transactions that raised around 1 billion francs. It will be the final step in Credit Suisse’s strategy to generate the 9-11 billion francs Thiam predicted when he unveiled his restructuring in October 2015.

It was reported that Credit Suisse was exploring a share sale rather than an I.P.O. for its Swiss banking subsidiary, with a decision expected in April.

By canceling the I.P.O., Credit Suisse avoids sacrificing some of its most profitable division’s income and avoids the operational challenges of having a distinct listed organization within a global bank.

“I’m delighted they’re not selling the Swiss bank because it would have hurt the whole business, and issuing stock is simpler and cleaner,” said David Hussey, fund manager at Manulife Asset Management, a top 60 Credit Suisse investor.

Credit Suisse has lost 5.65 billion Swiss francs since 2015 as Thiam concentrates on developing its wealth management division while decreasing its investment bank, a change that the Swiss bank expects resulting in the loss of more than 10,000 jobs.

The bank’s management is battling an investor protest against high C.E.O. pay, which is probably to climax at its annual meeting on Friday, while the Netherlands is conducting an investigation into potential tax fraud and money laundering involving the bank.

Nonetheless, clarity on its capital-raising plans, in addition to better-than-expected first-quarter results, propelled Credit Suisse shares up as much as 3.7 percent to their highest since March 3. At 1135 GMT, the stock was up 1.9 percent.

“This combination of figures, and, much more crucially, the absence of capital uncertainty, position the shares for a relief rally,” noted Kepler Cheuvreux analyst Peter Casanova, who rates Credit Suisse’s stock as a “buy.”

The bank recorded a net profit of 596 million francs for the first three months of 2017, the largest quarterly profit since Thiam initiated his broad reorganization and more than even the highest expectation in a Reuters poll of analysts.

However, Credit Suisse warned that the second-quarter result “will be contingent on political events that are difficult to forecast at this time.”

Following the 4 billion franc capital raise, Credit Suisse intends to have a common equity Tier 1 (CET1) ratio of roughly 13.4 percent and a tier 1 leverage ratio of around 5.1 percent.

In comparison, Deutsche Bank anticipates its cash call to attain a CET1 ratio of 14 percent, while Swiss competitor UBS UBSG.S is slightly shy of 14 percent.
While some experts believed the argument over the bank’s capital situation had been settled, others were concerned that it would not be the last Cash Call.

“How can a bank the size of C.S. be so variable in terms of earnings and uncertain in terms of how much capital it requires?” They are being pushed to modify quarterly,” said Chirantan Barua, a Bernstein analyst. “This is not probable to be the final capital raising.”

Thiam stated that the full benefits of his reorganization would be realized by investors after next year.

“Nobody is more excited than I am to get to 2018 because that is when we will see what this bank can provide in 2019.”