Inflation:According to reports and the government, the economy is back on track to recovery. This can be seen through monthly economic data that are released which indicate increasing momentum. With the greater prospects for growth, various rating agencies have revised their growth ratings for India. However, some agencies have revised the growth prospects downwards rather than upwards.

The recovery and faster inflation

The Asian Development Bank has recently cut its forecast for India’s GDP growth for the financial year 2021-22. This has been reduced from 11 percent to 10 percent. The main reason for the same has been given some downside risk like inflation that is dominating the economic outlook in India. According to the Asian Development Bank, the rising input costs will emphatically have an impact on inflation. In fact, the impact has been projected to grow at a 5.5% pace, rather than the 5.2% that was previously estimated. It is no news that the second wave had inflicted humungous loss in the economy. But one thing that needs to be addressed is that it receded as fast as it had arrived. Though it is to be noted that the ADB’s earlier predictions were made during the month of April and had forecasted a growth of 10 percent.

However, the Bank still expects that the economy will rebound emphatically and strongly in the remaining three quarters. This is to mean that it will grow at a significant rate of 10 percent in the full fiscal year. Further prediction for the financial year 2022-23 has to been added which states that the economy is projected to grow at the moderating rate of 7.5 percent.

The primary risks to growth

It has been said time and again that vaccination is the key ingredient to fight the virulent nature of the virus. Such a claim has also been corroborated by the Asian Development Bank. The higher vaccination in the economy will ensure higher mobility and consumer confidence which will help revive demand. this will lead to greater output, thus, greater GDP and growth.

According to Dr. Abiad, the primary risks are effectively centered around the pandemic. According to the expert, until and unless a huge part of the population is vaccinated, countries will remain at the risk of renewed outbreaks. Additionally, a poor vaccination rate will significantly weigh on the outlook.

This is due to the fact that if vaccination is not conducted on a large scale, the health system will definitely get strained. With medical emergencies in the economy, the government will have to again impose mobility restrictions that will not materialize well for the economy which is still in the nascent stage of recovery. It is to be noted that even though the growth ratings have been degraded, it still remains much optimistic compared to RBi’s ratings. ADB still expects a growth of 10 percent compared to RBI which expects growth at 9.5 percent for the same financial year.

Thus, this had formed as the basis of ADB’s assessment which helped them stick to their projections. Secondly higher and improved Purchasing Managers’ Index readings too had had an impact on the ratings and had indicated growth.

But what will contribute to this year’s growth prospects? It is to be noted that consumption will not show swift alteration or growth, thus, the government spending or expenditure and exports will emphatically contribute to the current financial year growth.

Thus, comparatively, their contribution will be much more than it was in last year’s growth where consumption and pent-up demand was the main player. According to ADB the economic and growth prospects for the Asian Development Outlook for the financial year 2021 have also effectively and significantly improved. This has been mainly due to the healthy trend in export orders due to strong global demand which was itself recuperating. Thus, this has emphatically helped cushion the impact of the second wave on the economy. 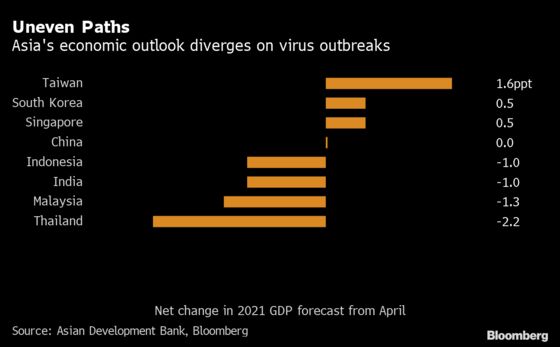 With higher growth prospects, it is to be noted that threats to the same have been posed by higher inflation in the economy. ADB has blamed the uptick in India’s inflation due to the rise of global oil prices. This has been exacerbated by the higher duties that have been imposed on the gasoline and diesel fuel by the Indian government that is effectively burning a hole in the taxpayer’s pocket. The inflationary pressures can also be seen in the double-digit consumer price inflation for items like vegetable oil and pulses. With the burgeoning inflationary prices in the economy, a further deficient monsoon too will augur further inflationary pressure which can not materialize well for the economy.

It is to be noted that the rising prices for oil and all the aforementioned commodities will effectively raise input and transportation costs for many producers. These higher production costs will be passed to the consumers who will have to bear the final brunt. Thus, these push inflationary factors will lead to persistent high headline inflation and thus will keep core inflation elevated.