The second Surge of COVID cases is already more showing its negative economic effects, What’s in store for the Economy 2021?

As the second wave of Covid-19 spread throughout the world, economists began to reduce the expected growth in India by 2021-2022. Nomura has reduced its growth forecast to 12.6% from the previous 13.5%. JP Morgan reports that India will rise by 11% against 13% earlier. This is not shocking because the epidemic is spreading rapidly and the economic activity is adversely affected—the ripples in car, property, banks and movies are all that vary. Second-order impacts can still exist, and cannot be calculated quickly.

Collections of governance taxes will be reduced and the fact that inflation is still rising is making things difficult. In fact, there are warning signs all over the place. According to the Centre for Monitoring Indian Economy, unemployment stood at 6.52 per cent as of March 31. As of April 18, it had risen to 8.4 per cent. Thanks to covid-19, dishonoured cheques in April 2021 (as of 15 April) increased marginally due to medical emergencies, according to HDFC Bank, the country’s most valuable bank. The Nomura India Business Resumption Index, which measures economic activity, dropped to its lowest level since December on April 11th. As of March 31, the banking system’s excess money, or the gross volume of money that banks deposit with the Reserve Bank of India (RBI), stood at 3.8 trillion rupees. As of 18 April, it had risen to $5.55 trillion, showing that bank lending has slowed significantly. The second round of worker reverse migration from cities, especially Maharashtra, has already begun. The state is under lockdown, but it is not as severe as it was last year. According to Kamal Nandi, company head and executive vice-president of Godrej Appliances, about 25-30 per cent of contracted labour has returned to their hometowns in Maharashtra, as stated by the Hindu Business Line. This pattern has been accentuated by the imposition of a six-day lockdown in Delhi. Reverse migration has a variety of second-order consequences, ranging from lower home rents to lower gross consumption. Furthermore, malls are seeing a resurgence in bad luck. Malls across the country had recovered up to 90% of their revenue, according to the Shopping Centres Association of India, but had taken a hit once again in April. The sector was raking in Rs 15,000 crore every month. However, due to municipal restrictions, almost half of the money has been lost, according to the statement. Mall closures have a significant financial effect. It also has an effect on sales of high-end cell phones, electronics (from TVs to laptops), clothing, and other products. The majority of multiplexes are located inside shopping centres. This has an impact on the distribution of films. Sooryavanshi, the much-anticipated film from Rohit Shetty releasing on 30th April, has also been postponed indefinitely.  Maharashtra’s automobile production has been affected as a consequence of the lockdown. According to the Economic Times, most corporations are running their factories at 50-60% of their usual capacity, which may result in daily losses of Rs 100-120 crore. Maharashtra houses a quarter of India’s total vehicle manufacturing potential.

All of the above evidence suggests that the second wave’s negative in the coming days.

Effects of Work from Home

The work-from-home phenomenon has been one of the major consequences of the pandemic. This will probably also be seen in a significant part of this year. This has reduced the market for commercial real estate and will continue to reduce it. The net office lease in the time between January and March 2021 decreased by 48 per cent to 3.58 million square foot, according to the estate consultant, Cushman and Wakefield. Demand for commercial real estate is projected to be subdued through 2021-22 as well, as people continue to work from home. ICICI Securities’ Adhidev Chattopadhyay predicts leasing picks up towards the end of September 2021 vs July 2021 earlier. There’s no point in constructing new offices if the ones that are still there can’t be leased out. This has ramifications for the building industry and is a major work maker. Over the past year, real estate agents have sold the idea that, with people working from home and children learning at home, families will require and therefore purchase larger houses. While this may somehow be true, the evidence does not exactly support this conclusion. From April 2020 to February 2021 the cumulative outstanding home loans to the banks increased by 1 trillion each. This decreased by 39.5 per cent to February 2020 from April 2019. The steep fall shows us that the rise in home demands does not mean that people can run out and buy one only because they need a larger house in these tough financial times. This all leads to an eventual downturn in building properties which will lead to further reverse immigration, as there would be lesser work in comparison to the past years in the construction sector.

Other second-order effects are also generated by people working at home. It has an impact on non-essential employees who keep the office going. Small shops selling food near workplaces will see a further drop in business. Formal attire, shoes, and other items are not needed. These results are difficult to quantify, but it does not negate their importance.  In 2020-21, the work done under the National Rural Employment Guarantee System was supported by people who moved back to their villages (MGNREGS). In 2020-21 the government invested Rs. 1.12 trillion on the program. In 2021-2022, the allocation is much less than 73,000 crores. Clearly, this scheme needs to be allocated further by the government. 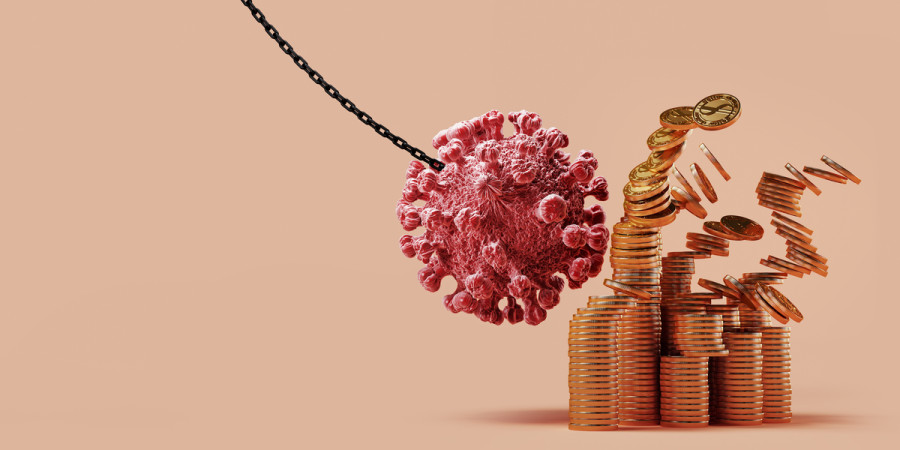 Banking is another field that is under pressure due to the second wave. Loan defaults are most probably going to rocket up. This happens as the first round of covid-19 banks already has to declare their reserves or bad loans not yet functioning. The rating agency ICRA reports that between September and December 2020, banks have collected bad loans amounting to Rs. 1.3 trillion and the total number of bad loans is not yet reflected. Out in March 2018, banks’ total poor loans stood at Rs. 10.36 trillion. They stood at Rs. 7.57 trillion as of December 2020. If we include ICRA’s estimation of undeclared bad loans, the total amount of bad loans will be $8.87 trillion. In the coming weeks, banks will begin disclosing these new bad loans as they release their reports for the months of January to March 2021. The bad loans that have accumulated as a result of the current second boom will not be revealed until the results for July to September are released later this year. Any loan default that occurs after April 1 will only be classified as a bad loan after 90 days. The argument is that it would take some time for the financial system’s cumulative tension to become completely visible to the public. The bad loan total is likely to exceed $10 trillion in a few months but on a much broader base of total banking loans. This could put the sector’s recovery a year or two behind schedule. That could also make things difficult for the government’s plans to privatize public sector banks.