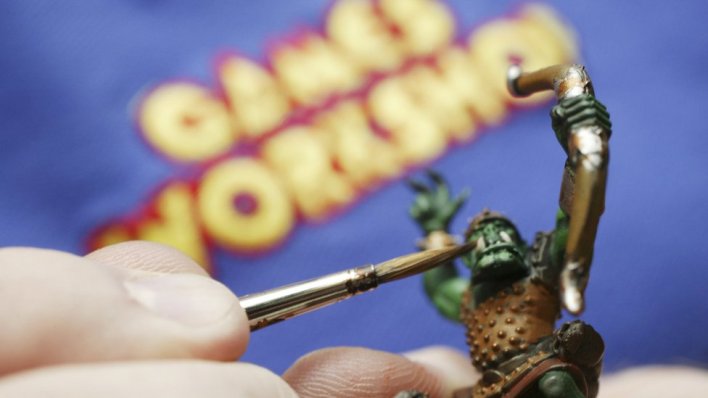 The company, which owns the Warhammer franchise but produces dozens of different games, saw pre-tax profits reach £74.5m, up from £38.4m.
Its annual report also confirmed a surge in revenue from £158m to nearly £220m.
Last month staff at the Nottingham-based group shared a £5m bonus in anticipation of the results.

The company’s shares have risen by nearly 150% in a year as it continues to bounce back from a difficult period when sales faltered.
The firm makes 75% of its revenues overseas, and has benefited from the weak pound.
However it has warned Brexit could impact on the business and “these risks are being assessed”.

Started in a bedroom

Games Workshop CEO Kevin Rountree said: “Our business and our Warhammer Hobby are in great shape, the best shape either has been for some time.
“And as we stride into the year ahead with more energy, ideas and drive, it’s clear to me that we’re only just getting started.”
Games Workshop, which was started by two friends in their bedroom more than 40 years ago, moved its headquarters from London to the Lenton area of Nottingham in 1997.
It is now planning to expand its manufacturing base so it can produce more figures.
The firm, which has nearly 490 stores worldwide, said it aims to open 25 more, mostly in Germany and the US.

See also  28 companies have completed IPOs in the last 7 months, and a lot more are standing in line. Why are we witnessing this IPO rush?