With 16 lakh active infections in India, Covid-19 has confirmed a lack of oxygen in an increasing pool of oxygen-intensive patients. In India, 50,000 metric tons of oxygen will be imported to meet the increasing demand. It was pointed to the Ministry of Health and Family Welfare to float an offer. Maharashtra’s demand for medical oxygen has touched the state’s maximum processing capability of 1,250 tonnes. The state has 6.38 lakh active Covid-19 events, with around 10% of them — 60,000-65,000 — requiring oxygen treatment, the highest rate of any state. Maharashtra also receives 50 tonnes a day from Chhattisgarh and another 50 tonnes from Gujarat. It will also get 100 tonnes from Reliance Industries’ plant in Jamnagar, Gujarat. With 59,193 active patients as of April 16, Madhya Pradesh needs 250 tonnes daily. Since the state lacks its own manufacturing plant, it must rely on Gujarat, Chhattisgarh, and Uttar Pradesh for oxygen. As the number of cases in neighbouring states rises, MP is concerned that suppliers from those states will be in short supply. Gujarat’s demand for over 49,737 active Covid-19 cases has reached 500 tonnes per day. The centre-appointed empowered Group-2, established during the pandemic to track basic medical equipment, focusing on 12 heavy-duty states – Maharashtra, MP, Gujarat, and Rajasthan. The oxygen requirement is expected to shoot up in Karnataka, Uttar Pradesh, Delhi, Chhattisgarh, Kerala, Tamil Nadu, Punjab, and Haryana in the next few days. Excess oxygen is to be distributed to these 12 states in order to satisfy their anticipated demand. The problem is acute in rural areas. The Covid- 19 cases are increasing without any big storage tankers and well-equiped nursing homes, where oxygen cylinders are supplied every day.
Where is the amount of oxygen extracted and what are the supply constraints?
Oxygen has applications in the iron and steel industries, hospitals, pharmacy manufacturing plants, and the glass sector. Currently, the majority of states have allocated all of their oxygen supply for medical purposes. India has the ability to manufacture more than 7,000 metric tonnes of medical oxygen, according to industry experts. Inox Air Products, Linde India, Goyal MG Gases Pvt Ltd, and National Oxygen Limited are the main manufacturers. Inox, the largest of them, manufactures 2000 tonnes that are currently 60 per cent of the country’s overall medical oxygen demand. According to an Inox official, all nitrogen and argon gas production has been halted, and all services have been redirected to oxygen production.
Smaller factories that manufactured industrial oxygen were permitted to produce medical oxygen during the first wave of the pandemic by modifying those requirements. This has aided in increasing the potential of the medical oxygen supply of the country.
Liquid oxygen with a purity of 99.5 per cent is prepared by manufacturers and processed in jumbo tankers before being shipped to distributors in cryogenic tankers at a specific temperature. A regasification procedure is used at the distributor stage to turn oxygen into gaseous form and fill it into jumbo and dura cylinders. These cylinders are then sold to smaller manufacturers or to hospitals directly. According to an industry specialist, the issue is that demand is high, but there aren’t enough cylinders and tankers to store and distribute oxygen. It is not possible to build new oxygen plants or extend existing ones right now. Inox has started two plants in West Bengal and Uttar Pradesh to manufacture 200 and 150 tonnes of oxygen per day, respectively, in the last year. One plant took 24 months to build. More plants are planned for MP, UP, Tamil Nadu, and West Bengal, according to an Inox official. Even though this can be fruitful in the future, it will not solve the immediate crisis. 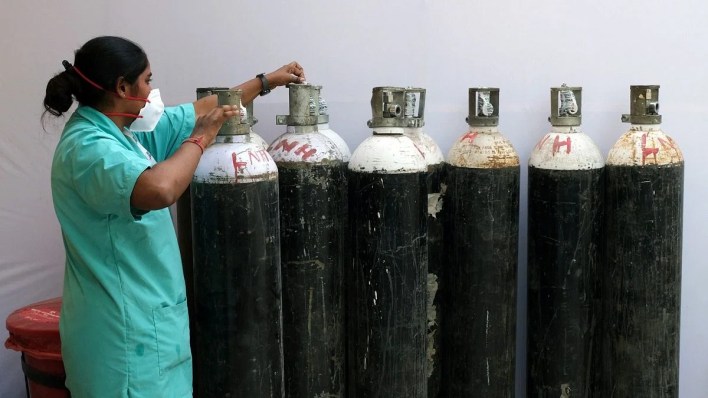 What are the logistical obstacles?
India does not have sufficient cryogenic tankers to ensure 24/7 medical oxygen transport on the route. Now the transit time between the fabricator and the patient’s bed has risen from 3-5 days to 6-8 days as oxygen is carried from one country to another. The lower or more isolated a hospital is, the longer the time it takes to access oxygen. Smaller vendors argued that even they did not have sufficient jumbo and dura cylinders to maintain flow.
What is the best course of action?
About 20 out of every 100 patients is symptomatic, with three being serious. The number of patients who will need oxygen ranges from 10-15 per 100. Among the options being considered or proposed are: The Empowered Group intends to select 100 hospitals in remote locations for the installation of pressure swing absorption (PSA) plants that can provide their own oxygen and make the hospitals self-sufficient. This would reduce shipping costs and gaps in the delivery of oxygen to distant locations. Another 162 PSA plants are currently being built. Hospitals are constructing massive holding tanks to house supplies that can last at least ten days. Several civil hospitals have set up such jumbo tankers in the last year to escape the constant wait for cylinders. Instead of relying entirely on conventional road transport, industry leaders in MP say they want to use trains to transport oxygen more quickly. Uddhav Thackeray, the Chief Minister of Maharashtra, has proposed that oxygen be transported by air from one state to another. Oxygen surpluses from iron and steel mills have been used for medical purposes. The Empowered Group-2 has also agreed to redirect argon and nitrogen tankers for oxygen transportation. The Petroleum and Safety Organisation has given directives in this regard. The use of industrial cylinders for refilling has also been recommended by the group.
The Ministry of Health has consistently cautioned against wasting oxygen and using it in inappropriate ways. Experts in the industry have expressed worry over potential leaks in hospital oxygen pipelines. Last year, an advisory committee appointed by the Ministry of Health set the oxygen supply in intensive care units at 40 litres per minute and in regular wards at 15 litres per minute. It has recommended that patients on oxygen assistance be monitored on a regular basis and that only people with oxygen saturation levels below 94 percent be placed on it.