Recently, the Supreme Court asked the Centre to respond to the allegations made in a PIL by a Dalit woman from Jharkhand stating that 3 Crore ration cards in the country have been cancelled on account of insistence on Aadhaar linkage and biometric authentication and that food grains have been denied to poor citizens, causing deaths to starve, including the petitioners. Poor internet has also been flagged as a problem in rural regions. At a later date, the Supreme Court said that the PIL will be heard in depth.
Findings of the survey by The Indian Express
This topic is addressed in some of the results from our national and state surveys. During the 2019 Lok Sabha elections, Lokniti-CSDS conducted a National Election Study (NES) in which it asked voters if they had ever been refused food because they did not have or produce an Aadhaar ID, or because their Aadhaar biometric data did not fit, or because of technological or server problems. When the responses of those from ration-card-holding households were analyzed (four-fifths of the 12,000+ electors polled said their household had one), it was discovered that 28 per cent, or more than one in four, had already experienced such a condition. While this does not sound too large in percentage terms, in absolute terms (extrapolation to the general family) that it would be enormous. Moreover, even though the fact that too many people are refused their right to ration even once raises concerns about the system placed in place, particularly on food safety. With the introduction of Aadhaar-based biometric authentication in PDS, there have been several complaints of people’s fingerprints not being verified by the e-PoS system at the ration store, iris scanners not being available as a backup, and weak Internet connections forcing people to return to the market.
The provinces, rural vs. urban
Contrary to popular belief, seeding and authentication issues are equally prevalent in villages and towns/cities. For example, while 28 per cent of respondents from ration card-holding households in rural areas were denied ration due to Aadhaar-related issues at some point, 27 per cent of respondents from ration card-holding households in urban areas were denied ration due to Aadhaar-related issues at some point. However, some major cities fared marginally better. The poorest were the hardest hit in both rural and urban areas, with 39 per cent of households earning less than Rs 2,000 a month saying they were refused PDS rations at any stage due to Aadhaar issues.
When we disaggregated the responses by a class of Hindi-speaking heartland states versus the rest, the most striking difference was found. As many as 40% of RC-holding households in the Hindi belt — Bihar, Jharkhand, MP, Chhattisgarh, Rajasthan, UP, and Uttarakhand — registered ration denial due to Aadhaar problems, compared to 20% of RC-holding households in the rest of the country. Our findings also say that the issue is less due to a lack of Aadhaar and more due to biometric authentication and server problems, as Aadhaar was recorded by 95 per cent of RC-holding households in the ‘Bimaru’ belt.
Five of the seven heartland states — Bihar, Jharkhand, MP, Rajasthan, and Chhattisgarh — had Assembly elections either after or shortly before the 2019 national election, and Lokniti raised the same question in these elections as it did during the NES 2019. Ration denial due to Aadhaar-related factors was registered by 36% of RC-holding households in Rajasthan, 39% in Chhattisgarh, 41% in MP and Jharkhand, and 56% in Bihar.
Aadhaar ubiquitous, but updating is the hardest part
The most difficult aspect of the Aadhaar method is updating. One out of every five people who attempted to upgrade their Aadhar card was unsuccessful. According to the study, 4% of Aadhaar cards currently have errors. Around 95% of adults in the country have Aadhaar, and 90% of people believe their data is secure, according to the study. However, according to the report State of Aadhaar 2019, 90% of people wrongly assume that having a unique identification number is mandated by law for bank accounts. The study shows how people experience Aadhaar, a software for uniform identification for all Indian citizens—how they get it, change it and use Aadhaar through different public and private departments, and their wider feelings and confidence. Furthermore, the details indicate the workings of Aadhaar and those not. 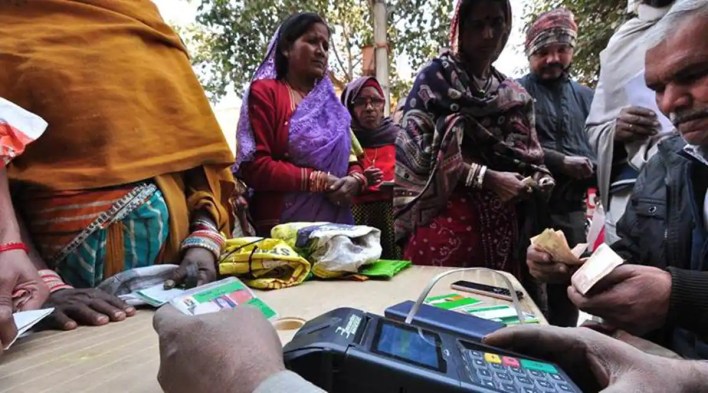 Most Indians use Aadhaar on average once a month, with a rest having a better service delivery.
The survey showed that eighty per cent of the recipients of state benefits felt that Aadhaar has increased the rations provided by the public distribution, guaranteed country employment and social retirement pensions based on two national household surveys involving more than 1.4 lakh people. It was also reported that residents with Aadhaar are 40% more likely, compared to other types of authentications, to receive a new SIM card within one day.
But Aadhaar complications can lead to denial of benefits, and the study has cautioned us at times that it can be excluded from welfare systems. One in hundreds of MGNREGS job cardholders did not get a job the last time they tried it due to Aadhaar problems and 0.5% of social security recipients did not get a pension the previous time they wanted to get it due to Aadhaar problems.
However, for reasons unrelated to Aadhaar, far more people were denied these facilities. The survey showed that most people are happy and trust Aadhaar. Around 92 per cent are pleased with Aadhaar and 67 per cent state they are satisfied. 90% of respondent believed that their data is safe, while 61% say it stops anyone from gaining access.
Denial of PDS grains due to Aadhaar-related issues and does not support the accusation of ration card cancellation (because the query wasn’t that specific), the fact that one-fourth of households did not receive rations they were entitled to at any stage due to Aadhaar compulsion is a serious problem. Furthermore, the issue isn’t limited to PDS. The surveys by Indian Express have questioned whether their household had ever been refused access to a government program that they were eligible for due to Aadhaar-related problems, and the answers and patterns were very close.

Ambedkar's envision has long faded away across the citizens. Why is it inevitable today to follow his ideology about India's democracy?