Egypt sends mediators to the Strip to stop last week’s escalation.With an unemployment rate of 45%, the Gaza Strip has long since ceased to be a place to live. The misery has increased during the pandemic and the sanitary confinement has been superimposed on the military blockade imposed by Israel since 2007. In this climate of despair, the launching of rockets and incendiary missile from the Palestinian enclave, immediately replicated by aviation bombings Israeli, raised the tension for a week in a place that has been the scene of three wars in the last decade.

A delegation from Egypt’s military intelligence services arrived in Gaza on Monday to stop the escalation between Hamas, the Islamist movement that rules the territory de facto, and the Israeli government. The Egyptian mediators entered the Strip through the Israeli Erez pass after meeting yesterday in Ramallah (West Bank) with political and security officials of the Palestinian Authority.

The spiral of violence, which began with the release of incendiary and explosive balloons in the direction of towns and border kibbutz, has been triggered over the weekend with the launch of several rockets towards Israel and riots with Molotov cocktails carried out by civilians on the border, after more than four months with hardly any incidents.

Hamas has encouraged escalation in an attempt to pressure Israel to abide by the ceasefire agreements signed last year, which ended massive protest marches on the border in exchange for allowing the ailing economy to recover. Gaza. Two-thirds of the two million inhabitants of the Strip require international aid to survive. Other commitments included the establishment of industrial zones on the periphery of the enclave and the granting of work permits in Israel, as well as the entry of so-called military and civil dual-use materials for the construction sector. 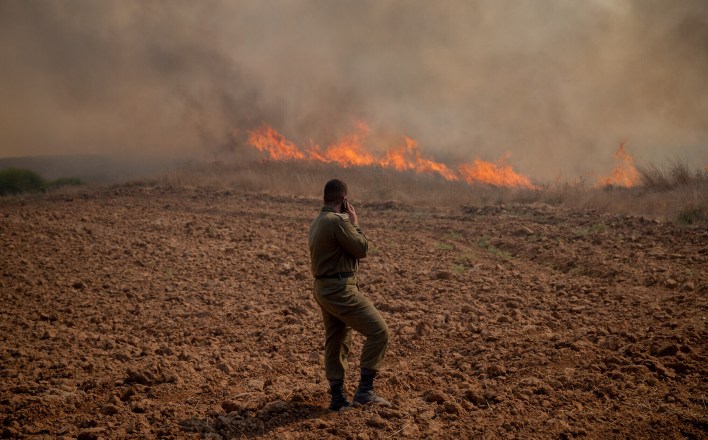 The political crisis that Israel has experienced, with three consecutive general elections since April 2019, but the promises of a truce on hold. The coronavirus pandemic relegated them to oblivion. The images of fires caused by the balloons launched from Gaza – which only in the early hours of Monday struck 150 sources that have burned dozens of hectares of crops – seem to have attracted the attention of the Israeli Army.

At first, the combat aviation launched retaliatory surgical actions on Hamas military targets, but the tension has multiplied in recent days air raids, with the support of helicopters and battle tanks. Successive reaction operations, however, threaten to unleash an uncontrolled escalation. On Sunday night, five Palestinian protesters were injured by Army sniper fire.

See also  Divesting from one facial recognition startup, Microsoft ends outside investments in the tech

Israel’s Defense Minister and key government partner, Benny Gantz, has adopted a heavy-handed policy in the face of Hamas attacks. Gantz, the general who led the 2014 Gaza war, has given the green light for the closure of Kerem Shalom customs, the only one through which goods enter Palestinian territory. Defence officials have also banned fishing in Gaza waters.

The closure of the border terminal has deprived the shipment of diesel to the only power plant in the Strip. The authorities have announced that the plant will stop working this Tuesday, which will leave the enclave without half of the usual energy supply. The rest comes from nets laid from Israel and Egypt. Gazans appear condemned to suffer blackouts of up to 12 hours again.

With its recent escalation, Hamas also hopes that Qatar will extend cash aid to the civilian population and that Egypt will facilitate the passage of Gazans through the Rafah border crossing, their only way out for immigration. The collapse of the economy threatens to turn against him, as it already happened in 2017 when he had to agree to concessions with the Palestinian Authority, controlled by the nationalist Fatah party of President Mahmoud Abbas.

Revolutionising the hyperlocal delivery market: How logistics is gearing up in the COVID-19 era