In the olden days, gods were meant as a replacement for scientific concepts. During the days when humanity had not advanced towards pioneering space exploration and astronomy, various cosmological events that could be seen with the naked eye were explained with the help of living deities that committed such acts. In the Egyptian mythology, one such god was Apophis – the God of Chaos. Committing to respecting our ancestors, scientists have continued to name various celestial objects in honor of such gods, and Apophis-99942 – an asteroid named after the Egyptian god himself – is speeding towards Earth, with a chance to impact our planet by 2068.

With a diameter of approximately four hundred meters, Apophis-99942 has been classified as a near-Earth asteroid that is set to make “a close approach to Earth” by 2068. While such claims run rampant in the Internet, this claim has been backed up by scientists both at NASA and various other laboratories. This, however, is not the first time the aptly-named asteroid has given us the jitters of a complete wipeout of mankind.

Ever since its discovery in 2004, scientists have continually predicted the path of the asteroid and monitored its travel with the help of various telescopes, notably the Subaru telescope. Recent observations have shown that the latest set of readings had revealed that the asteroid had undergone what is known as Yarkovsky acceleration – a small, almost miniscule force imparted onto celestial orbiting objects by nothing more than … sunlight. Yes, thanks to sunlight and the near-Earth position of Apophis – not to mention its small size – the asteroid is now speeding towards our planet, with a possibility of crashing into us.

See also  Online Rummy Tournaments in India: How to Excel in the Game

This asteroid, Apophis-99942, was discovered early in 2004 by David J. Tholen and his team of astronomers, Roy A. Tucker and Fabrizio Bernardi. At the Kitt Peak National Observatory, on the 21st of December, the small-sized asteroid passed Earth at a distance of 0.0963 astronomical units, or AU. For reference, the distance between the Earth and the Sun is referred to as 1 AU, or approximately eight light-minutes (~150 million kilometers).

Ever since, various predictions of the asteroid’s orbit have been made, many of them yet to be seen. The earliest closest approach of Apophis is calculated to be during the year of 2029, when the asteroid is calculated to orbit Earth at approximately thirty thousand kilometers above the planet’s surface. This distance is incredibly close for a celestial object as large and heavy as Apophis, given that the geosynchronous orbit (in which our communications satellites are located) are well above that height.  The latest set of observation from August 2017 take the Yarkovsky acceleration into its calculations, and have refined the range of error to within seven hundred kilometers of predicted orbit, and have demarcated April 13, 2029, as the day of first approach. 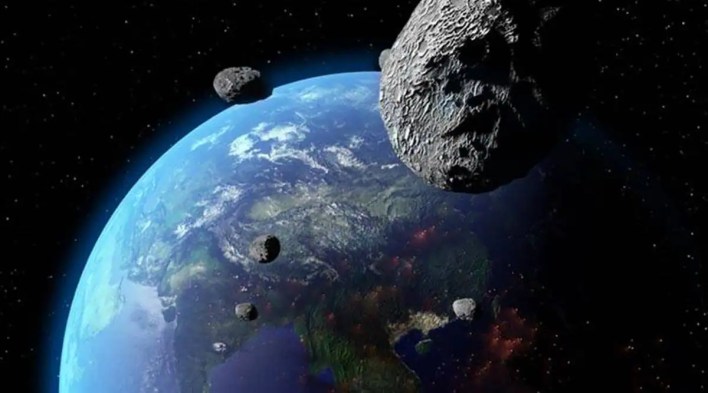 While this sounds like exciting news (and it should – it is an asteroid that will be visible to the naked eye!), the chances of collision during 2029 have been ruled out to be negligibly small. Initial observations had indicated a 2.7% probability that the asteroid could impact Earth during the year of 2029. While it seems small, it is a huge number when the margin of error and the size of the objects involved is taken into account. As expected, this caused significant murmurs of worry amongst the scientific community. Quoting from a NASA article post from 2004 titled Near-Earth Asteroid 2004 MN4 Reaches Highest Score to Date on Hazard Scale:

“A recently rediscovered 400-meter Near-Earth Asteroid (NEA) is predicted to pass near the Earth on 13 April 2029. The flyby distance is uncertain and an Earth impact cannot yet be ruled out. The odds of impact, presently around 1 in 300, are unusual enough to merit special monitoring by astronomers, but should not be of public concern. These odds are likely to change on a day-to-day basis as new data are received. In all likelihood, the possibility of impact will eventually be eliminated as the asteroid continues to be tracked by astronomers around the world.”

See also  South Korea: The Country That Was Lauded In Handling Covid-19 Is Starting To See A Sudden Surge Of New Cases Creating A Possibility Of A Devastating Third Wave

While NASA did acknowledge that the chances of impact are 1-in-300 and is a significant cause for concern, they had also quoted that they would refine the data as new observations came in every day. This refinement had led to the ruling out of the collision in 2029, despite the asteroid passing uncomfortable close to the planet. This had been achieved by using the measures of the Torino scale – while it measures 1 right now, it measured 2, implying that a highly unusual pass was inevitable and that the object required constant monitoring.

Can this be said for the current observations and prediction of Apophis 99942? Maybe.

The initial discovery of the asteroid had led to pre-recovery calculations that took various estimates into the picture. These approximations had added and multiplied into a scary yet doubtful prediction of the 2029 flyby, which has now been ruled out. While we can hope for the 2068 flyby to be ruled out as well – which has a 1-in-150 chance of impact – there has been a significant amount of time for which the calculations had been refined and taken other effects into account. This level of accuracy that has allowed us to predict the exact date of the flyby and impact could probably have some hidden errors in it, or it could only mean one other thing – that Apophis is heading for us, not towards us.

Thanks to various astronomy labs around the world and our sufficiently advanced telescopes, we are able to monitor and track the activity of the asteroid. For now, all we can do is stay calm and live our life one day at a time, while we let the ones doing the job of tracking the asteroid do their job. In peace, we stay.

See also  Some of the most fascinating scientific discoveries in 2020; Mars hidden lakes, a new organ in the throat, a metallic asteroid, and many more