India’s honourable prime minister Mr Narendra Modi is being denounced and pilloried for holding and conducting electoral rallies amid surging coronavirus cases. His response to the surge has received chiding by masses to a level that tags like # ResignModi and # SuperSpreaderModi have taken all over the internet. The hashtags are trending on Twitter in the last few days on account of a scary surge in coronavirus cases. One could easily say that people have become sick and disgusted with him for addressing lakhs of innocent people at state election rallies. But that’s not all, the condemnation has been elevated by his assent to Hindu devotees for congregating for a festival called Kumbh Mela, especially when the country is facing hundreds of thousands of positive cases every day with an increased mortality rate. Every single person on this planet is aware of the fact that India’s health infrastructure is almost on the verge of collapse- a further push and the entire system would come down on its knees leaving every tax-paying and non-taxpaying citizen of the country in a helpless and destitute state. And let me remind you, once we go that way there’s no coming back. The collapse of Indian health infrastructure right now would potentially pull back India’s standard of living and livelihood for years.
Social media websites and platforms have been flooded with desperate leads for plasma donations, medical oxygen cylinders, coronavirus tests, and hospital beds. There is no space left in the mortuaries and crematoriums for carrying out the funeral ceremonies or last rites with dead bodies being piled up against each other and people running out of life safety tools with every second that passes by. However, the leader of our nation seems to be silent and unaffected. Perhaps having swept to power in the 2014 central election with the biggest single party majority has made him supercilious and unanswerable or unused to such public roasting or desperate cries. This somehow justifies him organizing political rallies with thousands of people as its members, unabated by the deadly situations that loom over our heads.
Unlike the previous controversies surrounding the incumbent government such as the demonetisation of 2016, the introduction of the Citizenship Amendment Bill, scrappage of Article 370, the decision on Ram temple and the recent introduction of three farm bills, the current crisis has the potential to affect not a particular group or sect of society but every single body living within the domestic frontiers of the country at once. The unaccounted and unabated spread of the cadaverous virus can bring everything downhill for the political career of the party and the normal economic routine of the Indian citizens. It is only recently that the Indian economy has moved slightly back to recover following a year-long dissipated lockdown imposed in different parts of the country last year. Despite having the time to prepare, the government has failed to do so making the second wave of COVID-19 more fatal and noxious than the last first. This is what is different this time.
The country is reporting more novel cases than any other country in the words and has also witnessed newer peaks in recording daily new cases with deaths rising to nearly 179,000. Yet the topmost officials of our country are more occupied in campaigning heavily for their political party ahead of state elections in Bengal ending on April 29. Organizing rallies in Bengal is crucial for the prime minister’s Bharatiya Janata Party’s (BJP) political career because Bengal is one state which holds extreme importance in the Indian polity and where BJP is in a tight race with a regional party that rules the state.
Akhilesh Jha, the data head of the federal Department of Science & Technology, criticized the political rallies by writing on LinkedIn that parties are holding rallies as people of their country head to funerals. There are pictures and videos of top-most campaign leaders like Union home minister and chief minister Mamata Banerjee addressing masses without taking necessary precautions or even wearing a mask. Aren’t these exactly the people who are supposed to ensure proper and stringent implementation of safety norms in the state? Rather, they are the ones flouting them. 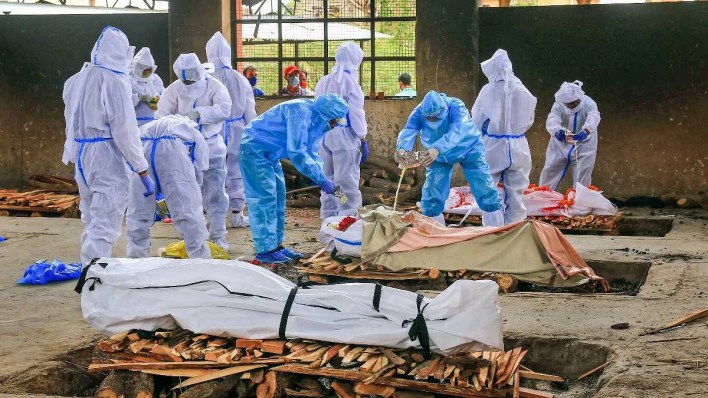