Approximately 1,200 vaccine centres have inoculated over 64% of the adult population in the world with the first shot of a vaccine Covid-19: this is the secret behind Bhutan’s progress in managing virus transmission when large countries are scrambling over arms. Bhutan could be the first country in the world to begin a vaccine campaign. However, the little Himalayan nation, which received 1.5 lakh doses from India in January, decided to postpone the vaccination campaign until March 27 after Buddhist monks informed the government that the time before that was not auspicious to begin an inoculation campaign. It took advantage of the pause to enrol anyone who wanted to be vaccinated and to schedule a quick and effective vaccination campaign.
It began one of the world’s fastest immunisation campaigns in late March, inoculating a world-record-breaking 64 per cent of Bhutan’s adult population with the first injection. Bhutan has administered a first vaccine dose to more than 479,000 people, or 64 per cent of its total adult population, as of Friday (April 23). Bhutan has always prioritized the well-being of its citizens over national prosperity. Only Seychelles has vaccinated a significantly higher percentage of the population (69%) than the rest of the world, but it took months.
So, how did the Himalayan Kingdom reach those heights?
Over the course of a week in late March and early April, the vast majority of Bhutan’s first doses were sent out at nearly 1,200 vaccine centres. The rate was higher than that of the United Kingdom and the United States, more than seven times that of neighbouring India, and nearly six times the global average. 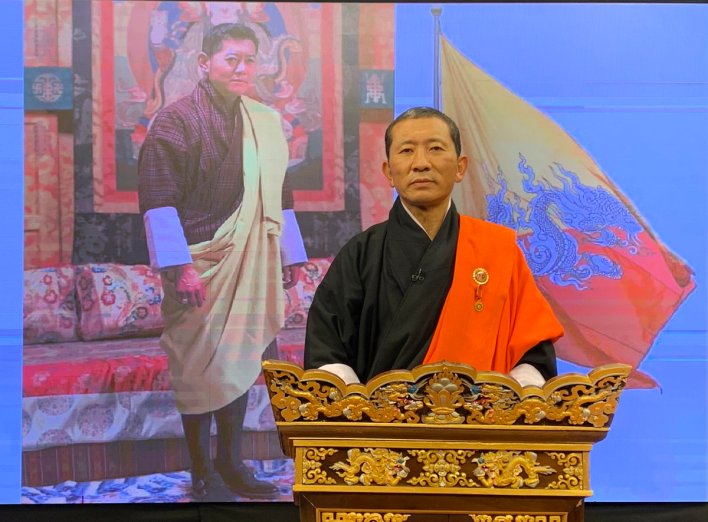 Bhutan is now ahead of many other geographically remote countries with limited populations, such as Iceland and the Maldives. While Bhutan’s limited population size is a major advantage over many other nations, credit for the highly successful vaccine programme must go overwhelmingly to the political leaders who recognized the urgency of the campaign before it became out of control. The Dragon King, Jigme Khesar Namgyel Wangchuck, founded the Guardians of Peace, an orange-suited national-service corps that has assisted in the establishment and staffing of over 1,200 vaccination stations across the country. Volunteers delivered vaccines to health centres, made sure people turned up for appointments, and taught Bhutanese about Covid-19 techniques including social distancing and mask-wearing. Authorities also arranged for helicopters to carry the shots in places that were inaccessible by rail. “We are very thankful for the vaccine. We would have had to fly for more than five days [to get vaccinated] if it hadn’t been for the helicopter service”, Dema, a resident of a mountainside village in the north-western district of Gasa, where approximately 3,000 Bhutanese reside, told Kuensel Online (a local website).
Furthermore, Lotay Tshering, the Prime Minister, is a doctor, and Dechen Wangmo, the health minister, has degrees in cardiology and epidemiology from prestigious American universities. As a result, quarantine measures in the country have been strict: The King himself spent a required week in isolation after returning to Thimphu from a tour of the southern provinces in March, and the Prime Minister locked himself away for 21 days after an official trip to Bangladesh.
The country’s inoculation process has been sped up thanks to a low Covid-19 caseload. With the help of two carefully handled lockdowns, Bhutan has only confirmed 934 cases and registered one death. With a few exceptions, the country’s borders have been closed for more than a year, and those wishing to enter must first undergo a mandatory 21-day quarantine.
India’s contribution to the vaccine campaign in Bhutan
India has also played a critical role in the vaccine’s rapid rollout in Bhutan. The nation had received 600,000 free doses of the Covishield vaccine produced by the Serum Institute of India in an attempt to offset the growing Chinese presence in the area. New Delhi had also sent Bhutan trial kits, personal protective devices, N95 masks, and critical drugs such as paracetamol.
Bhutanese immunization programs have a long history
Bhutan’s prized possession — the well-established “cold chain” vaccination program — is credited with the country’s current prosperity, according to Health Minister Dechen Wangmo. In the 1990s, the world had reached compulsory immunisation, and new immunisation is based on existing programs. According to the health minister, certain programs were still in place, making it very simple to launch a new vaccine with a lot of campaigning and micro-level preparation. Furthermore, because of pre-existing structures, people were less hesitant to take the shots. Health staff who had completed the Expanded Programme on Immunization (EPI), which set the tone for Bhutan’s holistic public healthcare system and prepared a cold-chain infrastructure for Covid-19 vaccines, were also part of the vaccine outreach. Bhutanese primary healthcare is provided free of charge. These healthcare workers were in charge of administering the vaccines around the world.