Manufacturers of air conditioners have had the best summer ever this year (ACs). Despite the pandemic Russia-Ukraine war, inflation, and high commodity prices, AC sales in the country have increased.

Dealers say that air conditioners are 45 percent to 50 percent foreign parts (electronic, copper, and aluminum). Unexpected events have messed up the entire supply chain, making ACs 10 percent to 12 percent more expensive than last summer. In addition, high inflation has hurt middle-class families, leaving them with a gaping hole in their wallets of INR4,000 to INR6,000 each month because they have to spend more money on things like food and clothes. There is still a lot going on in the AC market.

In March, 1.5 million air conditioners were sold in India, the most ever, beating the previous record of 0.98 million units by almost 50 percent. Because of the early start of summer and rising average temperatures, 1.5 million units were sold, the most ever. A record number of teams will be sold this year, up from 7.5 million in 2021. It should be a good year for the industry, with sales of about INR30,000 crore. 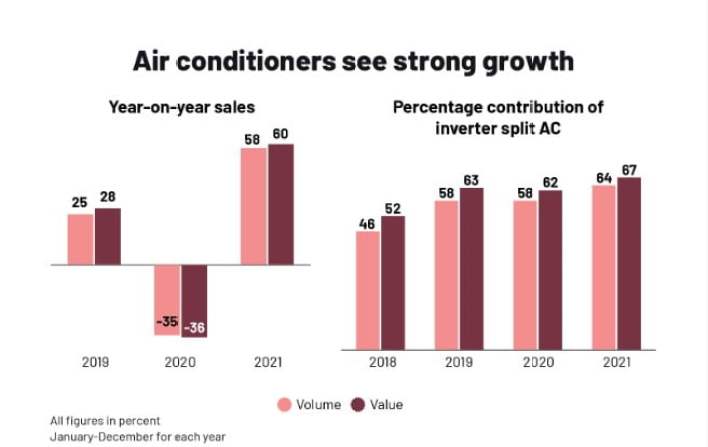 There will be a lot more cars in the next fiscal year than there were last year. ACs aren’t as common in India as in Europe and Asia, where more than 50% of homes have them. By 2026, the number of people in India who use it is expected to rise to about 13%. 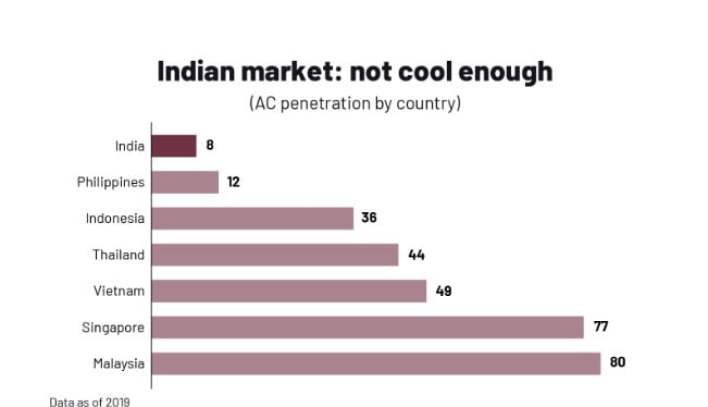 An oasis of comfort

After two years of low sales, a significant boost in demand has been a massive relief for AC manufacturers. Many people buy appliances from companies like Havells India, Voltas, Panasonic, and Haier Appliances India in the summer, which is a good sign for the companies. Panasonic India and South Asia chairman say, “We are in the middle of a party.”

We haven’t had a summer break in two years because of Covid-19 and lockdowns, but this summer has given us more than a break. In the long run, it’s going to be a lot bigger. Haier’s two factories make 1 million units a year each, one is in Pune, and the other is in Noida, producing 1 million units a year.

People buy air conditioners more often in the summer than they do all year, and this is different from other cooling appliances like refrigerators, which sell yearly. Until now, that wasn’t the case. There has been a rise in the work-from-home (WFH) and hybrid work culture, and ACs have become more critical than luxuries.

See also  NASA is developing AI to give directions in space

On the other hand, Air Conditioners replacements are being bought because people want to use less energy.

When it’s hot outside, people start to use air conditioners. The season usually begins in December in the southern states and spreads across the country as the temperature gets hotter. This year, the weather department has issued heat-wave warnings in many parts of the country. Indian meteorologists say that April 9 was the hottest day in New Delhi in five years, and it was 42.4°C. Almost 92°F (33°C) was the highest temperature in March when the government started keeping track of it in 1901.

Businesses that made ACs in December 2021 did not see any signs of a surge in sales, so it was back to business as usual. Adding the Omicron variant only made things more confusing, even though there were no lockdowns like there were in the past two summers when things have gone on since they have been unheard of.

A senior executive at Lloyd says that “in normal times, April is the big month.” It was different for this year, though. In March alone, sales smashed all records, and we are outraged. In 2017, Havells India bought the consumer electronics business of Lloyd for INR1,600 crore to grow its AC business, which it had tried to build on its own before.

The industry is betting that the growth spurt will last through April, May, and June. ACs will become more popular, says Satish of Haier, and the weatherman has said that it will keep getting hot.

Brushing off the wind
The cost of air conditioners has gone up, so people who want a 1.5-ton AC now have to pay 12-15% more than they did in the summer of 2021 for the same size. The prices of all the parts that make the appliance has gone up. The prices of electronics, a compressor, aluminum, copper, and plastics have gone up. This has led to an overall increase in input costs of about 25%. The cost of shipping and logistics has also gone up because of the rise in oil prices. So far, the industry has taken on some of these costs. If commodity prices don’t go down, AC prices could increase even more this season.

This is Kamal Nandi, Godrej Appliances’ vice president, and executive head. Kamal Nandi says that commodity prices have risen by about 30% in 15 to 16 months. “Some of the costs have been taken on by the industry.” But if raw-material prices don’t go down soon, AC prices will go up over the next year.

Nandi thinks there are three reasons why sales have gone up even though prices have gone up. When there was a lot of demand two summers ago, there were a lot of pent-up markets. This is making people buy things in revenge. Second, people want products that use less energy. Because people now work from home, they need air conditioners in their homes more than they used to, so there are more ACs in homes.

While there is a lot of demand, companies give away freebies and financing options to make the high prices less painful. Credit cards and non-banking finance companies like Bajaj Finance make up about 40% of AC sales. Lloyd has teamed up with lenders such as HDFC Bank and ICICI Bank to get cash back even if you don’t pay an EMI.

The payment must be made with their credit cards, but the cashback will still be there. If you buy a Lloyd AC from one of these brands, you’ll get freebies like a Havells trimmer, hand blender, electric iron, or bright lamp, among many other things. For this season, there is another way for people to buy an air conditioner without paying at all. This is called the BNPL (buy now, pay later) scheme.

Trends that have changed:

While more people buy products that use less energy, Sharma of Panasonic also sees a rise in “value” sales. Because of this, more inverter ACs are being sold. The best one for a 1.5-ton split AC with a four- or five-star rating is the one that sells the most (the higher the rating, the more the energy efficiency).

It is the Bureau of Energy Efficiency that gives the energy ratings. ACs with five stars are supposed to use less electricity than those with one star. A five-star AC should save 20% to 22% more electricity than a one-star AC. 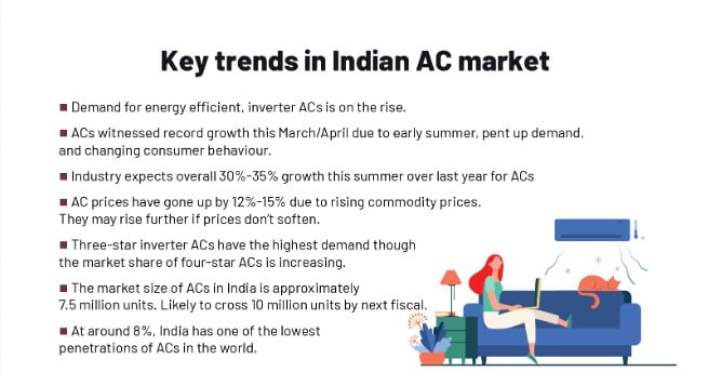 People in Delhi NCR and North India are now more likely to use split ACs than windows, while the rest of India is more likely to use them. This is an exciting change. Window ACs, popular with people who rent homes because they are easier to move when they move, makeup about 15% of the market.

While young professionals and gig workers like to use BNPL schemes to buy air conditioners, some also look into renting them, like in a hotel. Rajesh Kumar, who lives in Mumbai and recently graduated from the Manipal Institute of Technology, works in Gurugram for one of the top five consulting firms. He rents an apartment. INR6,500 for six months of use. It comes with two free service calls. What a deal! Indian rupees (INR): “I didn’t want to spend INR30,000 to buy a new one because I don’t know how long I’ll be in Gurugram.” 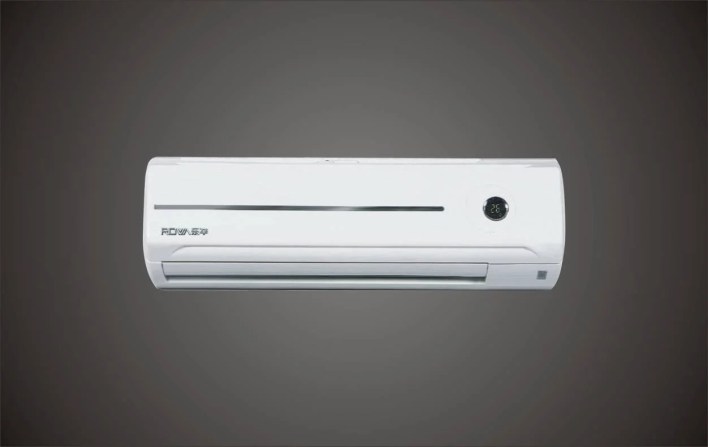 Sharma, an employee of Panasonic, says that people from all walks of life have been coming back for new machines this summer. People who wait until the summer to buy things are the first. The second group comprises people who move into new homes and want to put an AC in every room. The third group includes looking for good deals, exchange offers, and new products. There is a lot of demand from all three groups because of the rise of hybrid work and the rise of revenge shopping.

The industry hopes that this growth will continue, even though it will cost more. One thing that might slow down the market is if the weather report that people pay attention to turns out wrong.

Has in revenge India suspended the tourist visas of China in 2022?

Fast Food: Why can automated kitchens be the key to 10-minute deliveries?