The first district-wide lockdown in Wuhan, China, since 2020, which experienced the first Covid-19 lockdown in history, serves as a reminder of how far the country still needs to go until things get back to normal following the pandemic.

In the more than two years since Wuhan’s Jiangxia district was locked down to treat what was the then mysterious pneumonia, over 1 million residents there had been told to stay indoors and not leave the house unless absolutely necessary.

All forms of public transit have been suspended, and entertainment establishments have been shut down for three days after four asymptomatic cases were found in the region on Tuesday.

China is still employing its Covid Zero approach of lockdowns, movement restrictions, and mass testing while facing a larger threat than ever before from more contagious strains that surpass even the strictest regulations. In the country on Tuesday, there were 604 local cases reported, down from 868 the day before.

Shenzhen, a regional hub for manufacturing where 4 additional cases were reported on July 19 to raise the total number of cases since then to well over 150, is also drawing attention.

When the flare-up prompted an order for some of China’s major firms to operate on a “closed loop” system for seven days, worries about disruptions to the world’s supply chains were raised.

The city government asked its top 100 companies, such as the iPhone-maker Foxconn and the crude oil giant CNOOC Ltd., to restrict activities to personnel who live in closed-loop or bubble environments and have little to no contact with people outside of their facilities or offices.

Shenzhen officials said on Tuesday that the outbreak is under control, but they still expect to find more illnesses. They said that the bulk of the cases was swiftly separated after being discovered early. Health commission official Lin Hancheng stated that the outbreak is connected to cases that have occurred abroad without providing additional information.

According to Shenzhen police, 82 people have been detained in recent months for smuggling products and violating rules pertaining to the prevention of epidemics; 19 of them were drivers transporting supplies between Shenzhen and Hong Kong.

Drivers are not permitted to interact with members of the public while they are at work, and authorities have stated that they would aggressively enforce this policy. 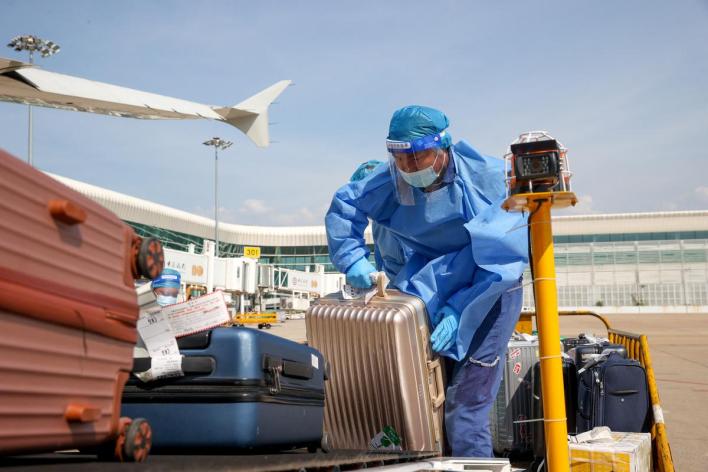 16 local cases, including one that was found outside of quarantine, were reported from Shanghai elsewhere. In order to lower the possibility of an outbreak, the financial center is undertaking two rounds of required mass testing this week in nine of its 16 districts.

Local transportation associations have suggested operating warehouses under a closed-loop system in order to contain the viral crisis in the city’s Baoshan district, which discovered outbreaks among logistics workers.

Operations at 17 steel warehouses were shut down starting on Tuesday for three days, according to a survey by the researcher Mysteel, and some steel scrap transportation was also impeded.

An enquiry from Bloomberg News regarding its warehouse operations was not immediately answered by Baoshan Iron & Steel Co., the listed division of the largest steelmaker in the world.

The Guangxi area in the south, which reported 269 cases on Tuesday, and the province of Gansu in the northwest, which saw 234 new infections, are the hotspots where the majority of cases in China are concentrated.

Authorities in Wuhan, China, shut down several businesses and public transportation after finding four cases of COVID-19 there. Wuhan is a large city where the epidemic first appeared.

The almost 1 million-person Jiangxia district of Wuhan said on Wednesday that it would prohibit big group gatherings and restaurant dining, close several public entertainment facilities and agricultural markets, and suspend bus and subway services for the ensuing three days.

Authorities also asked locals to stay put over the three-day period and warned visitors not to enter.

The limitations were put in place after authorities in the 11 million-person core city reported discovering two instances during routine mass testing and two while screening people in close contact.

According to China’s rigorous “dynamic COVID zero” policy, authorities have ordered lockdowns and widespread testing that will affect millions of people in locations where even a small number of illnesses have been found.

China claims to have one of the lowest COVID-19 death rates in the world. Still, as the pandemic enters its third year, concerns have been raised about whether the zero-tolerance policy can be sustained given the high economic and social consequences.

The second quarter saw China’s economy expand by just 0.4%, the slowest rate since the pandemic began, as lockdowns in major cities, including Shanghai, halted business operations.

The Asian Development Bank reduced its growth prediction for China for 2022 from 5% in April to 4% last week.

Many economists are sceptical that China will be able to meet its 5.5 per cent GDP goal this year due to Beijing’s strict influenza regulations.

Did the coronavirus develop in a Chinese lab or at a market in Wuhan? Input from two recent studies 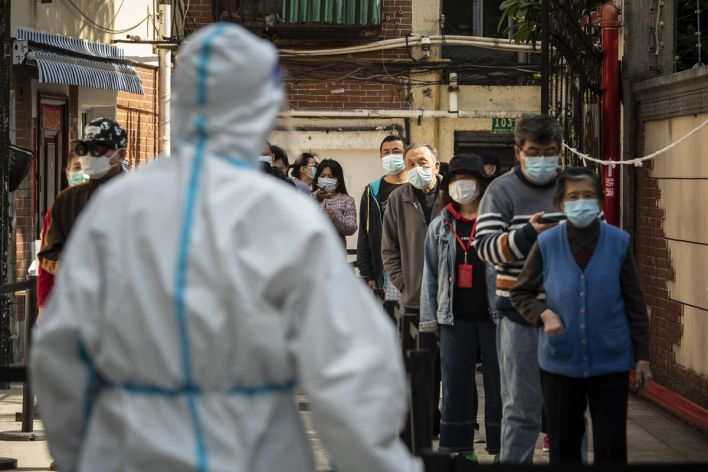 Further supporting the idea that the virus arose in the wild rather than escaping from a Chinese lab, two recent investigations prove that the coronavirus pandemic originated in a Wuhan, China market where live animals were sold.

The study, published online by the journal Science on Tuesday, suggests that the Huanan Seafood Wholesale Market was probably the early epicentre of the disease, which has since claimed the lives of close to 6.4 million people worldwide. According to research, SARS-CoV-2, the virus that causes Covid-19, most certainly spilt to humans twice from animals.

The co-author of one of the research and professor in the Department of Immunology and Microbiology at Scripps Research, Kristian Andersen, stated, “All this evidence tells us the same thing: It specifically points to this market in the center of Wuhan. I was very certain about the lab leak until we went in really far and looked at it more closely.”

In one study, University of Arizona evolutionary biologist Michael Worobey and his colleagues estimated the locations of more than 150 of the earliest known Covid-19 cases from December 2019 using mapping technologies.

Using information from a social media app that established a pathway for persons with Covid-19 to receive assistance, they also mapped cases from January to February 2020. Chinese researchers’ data were used in the study.

Where did the early instances live out of all the places they might have named home?

The highest density of instances was found to be both highly close to and quite centred on this market, and it turned out when we were able to examine this, Worobey said during a news briefing.

This holds for all December cases and situations with no known connection to the market. And this suggests that the virus first spread among those who worked at the market before moving on to other neighbourhood members.”

See also  How promoters are dumping their companies' shares to retail investors, 5 fallen stocks where promoters hold less than 5 percent of the Shareholding.

According to Andersen, they also found case clusters inside the market, “and that clustering is very, very specifically in the areas of the market” where they now know people were selling wildlife that is susceptible to coronavirus infection, including raccoon dogs.

In the second investigation, researchers looked at the genomic diversity of the virus both inside and outside of China, commencing in December 2019 with the earliest sample genomes and continuing through mid-February 2020.

The discovery of two lineages, A and B, led researchers to the conclusion that the pandemic originated in Wuhan. 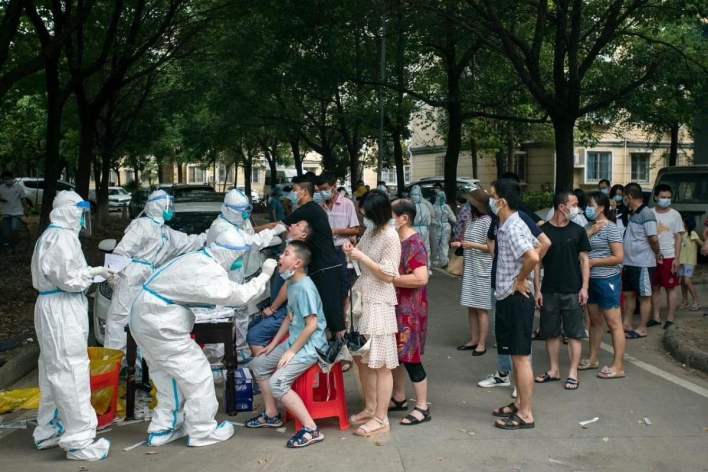 Lineage A is more genetically linked to coronaviruses found in bats, according to Joel Wertheim, a viral evolution researcher at the University of California, San Diego and a study co-author. In particular, at the market, lineage B seems to have begun spreading early in humans.

Now that I think about it, I guess it sounds like I just mentioned that a once-in-a-generation occurrence happened twice quickly. However, certain circumstances existed, including the proximity of people and animals and a virus that can pass from person to person and from animal to human. In light of this, he claimed that “barriers to spillover have been lowered such that many introductions, we feel, should be expected.”

The WHO had faced criticism for abruptly dismissing the lab leak claim. Many scientists believe that the virus spreads from bats to humans either directly or indirectly. However, the World Health Organization suggested a more thorough investigation of the possibility that a lab accident was to blame in June.

“Have we disproven the lab leak theory? Definitely not, “Andersen remarked. However, I think it’s important to note that there are conceivable and realistic scenarios in this case. It’s important to understand that possibility does not equate to likelihood.

Over the causes of the outbreak, there is a great deal of disagreement. While some scientists believe a lab leak is more likely, others are open to both possibilities. Nevertheless, the two investigations, in Matthew Aliota’s words, “kind of lays to rest, hopefully, the lab leak hypothesis,” according to the researcher at the University of Minnesota’s college of veterinary medicine.

According to Aliota, who wasn’t involved in either study, “both of these investigations truly provide compelling evidence for the natural genesis concept.” Because it’s hard to sample an animal at the market, this might be a smoking gun.

Forces in India, US seek to sow division: USAID administrator