The young woman from Myanmar and her family now live amid the tall grasses of a riverbank on the Thai border, trapped between a country that does not want them and a country whose military could kill them.

Like thousands of others fleeing mounting violence after a military takeover in Myanmar last February, Hay left her village for neighbouring Thailand in search of a safe haven that does not exist. Returning to Myanmar would place her and her family at risk of death.

And yet that is precisely what Thai authorities wary of jeopardizing their relationship with Myanmar’s ruling military tell them to do at least once a week, she says.

When they told us to go back, we cried and explained why we can’t go back home, says Hay, who lives in a flimsy tent on the Moei River, which divides the two countries.

The Associated Press is withholding Hay’s full name, along with the full names of other refugees in this story, to protect them from retaliation by authorities. Sometimes we cross back to the Myanmar side of the river. But I have not returned to the village at all.

Though international refugee laws forbid the return of people to countries where their lives may be in danger, Thailand has nonetheless sent thousands of people who fled violence by Myanmar’s military back home, according to interviews with refugees, aid groups and Thai authorities themselves.

That has left Hay and other Myanmar refugees ricocheting between both sides of the river as the fighting in their home villages rages and briefly recedes.

It is this game of ping-pong, says Sally Thompson, executive director of The Border Consortium, which provides aid to Myanmar refugees in Thailand. You can’t keep going back and forth across the border. You’ve got to be somewhere where it’s stable .And there is absolutely no stability in Myanmar at the moment.

Since its takeover last year, Myanmar’s military has killed more than 1,700 people, arrested over 13,000 and systematically tortured children, women and men. 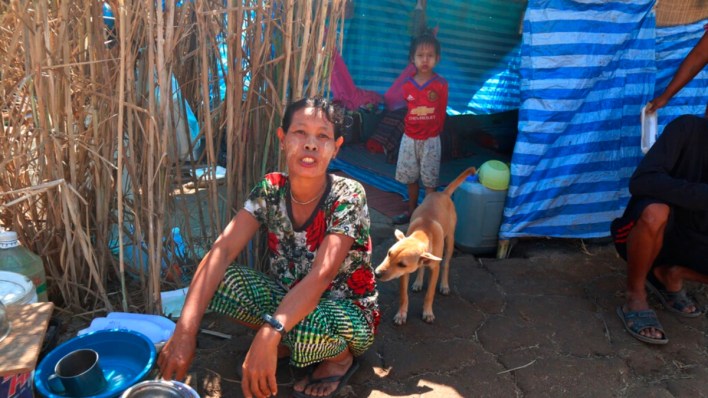 Thailand, which is not a signatory to the United Nations Refugee Convention, insists Myanmar’s refugees return home voluntarily. Thailand also insists it has complied with international non-refoulement laws, which dictate that people must not be returned to a country where they would face torture, punishment or harm.

As the situation on the Myanmar side of the border improved, the Thai authorities facilitated their voluntary return to the Myanmar side, says Thailand Ministry of Foreign Affairs spokesperson Tanee Sangrat. Thailand remains committed and will continue to uphold its long-held humanitarian tradition, including the principle of non-refoulement, in assisting those in need.

Somchai Kitcharoenrungroj, governor of Thailand’s Tak province, where thousands of people from Myanmar have sought refuge, said many crossed illegally when there was no fighting.

We had to send them back as the laws said, Kitcharoenrungroj says. When they faced the threats and crossed here, we never refused to help them.

According to the U.N. High Commissioner for Refugees, Thai government sources estimate around 17,000 Myanmar refugees have sought safety in Thailand since the takeover. But only around 2,000 are currently living in Thailand, said the Thai-Myanmar Border Command Center.

Most of those fleeing clashes between the military and ethnic minority armed groups along the border must wade across the rivers dividing the two countries, belongings and babies balanced atop their shoulders. They are then relegated to living in crowded cattle sheds or rickety tents made of tarpaulin and bamboo.

The moment there is a pause in fighting, refugees and aid groups say, Thai authorities send them back, despite Myanmar’s military taking over villages, burning homes and setting land mines.

I have seen some of them being forced to get in a car, get off at the river, and cross over to the other side, says Phoe Thingyan, secretary of Thai aid group the Overseas Irrawaddy Association.

In Myanmar’s border regions, ethnic minority armed groups have been fighting the central government for decades in a bid for greater autonomy, with more clashes after the military takeover. Despite some pauses, witnesses say the fighting there is now the worst it’s been in decades. At times, the gunfire, bombing and fighter jets have been audible from Thailand. 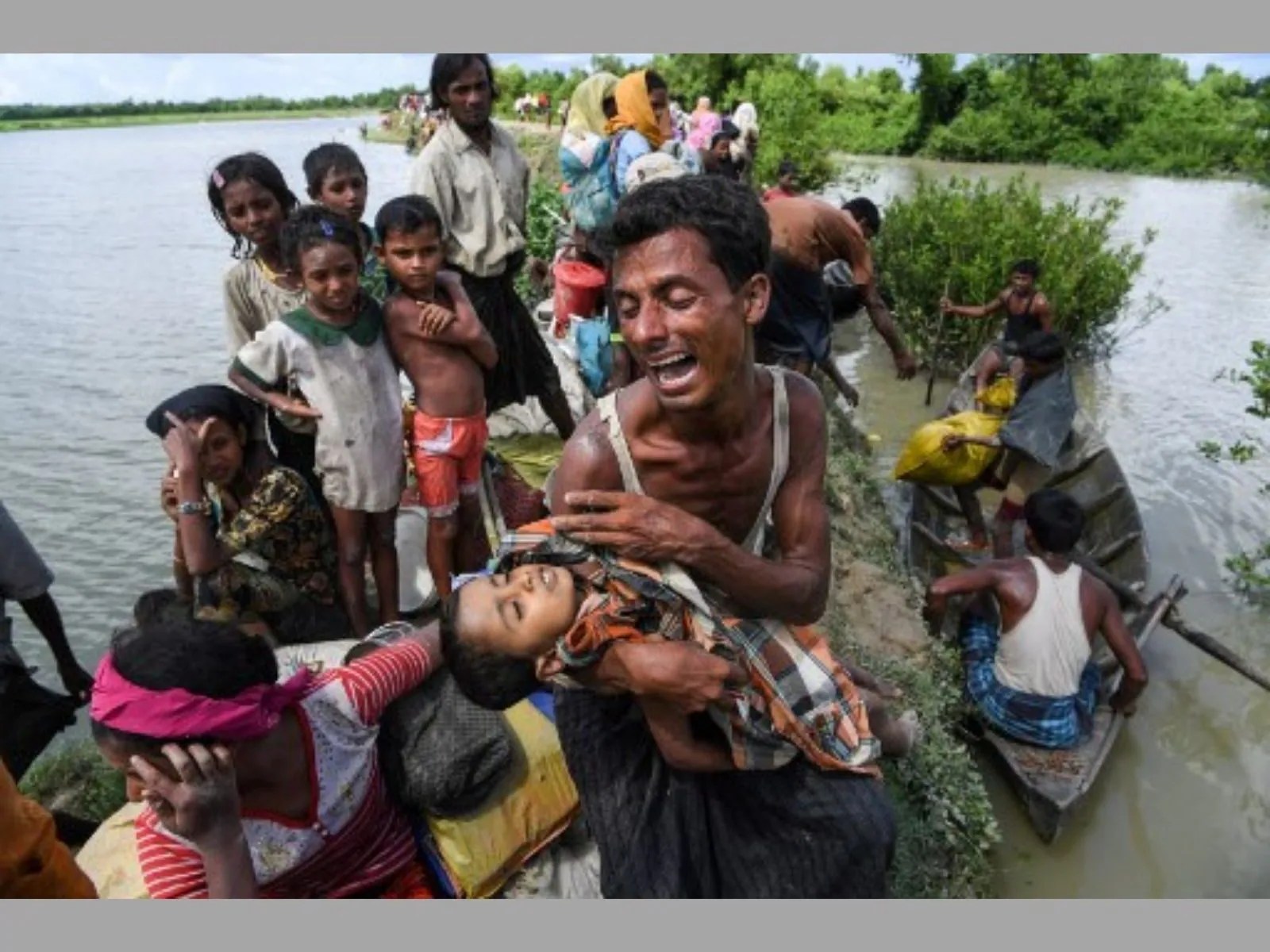 Life along the river is grim and frightening.

It is not far from the war zone, says Naw Htoo Htoo, of the ethnic Karen Human Rights Group. The elderly and children are not comfortable in the makeshift tents .There are illnesses not only caused by the weather, but also by COVID-19.

On the Thai side of the river, Hay’s tent offers virtually no protection from the sweltering sun, mosquitoes and drenching rains. Food and other supplies are scarce, yet the Thai authorities have refused to allow international aid groups access to the refugees.

The Thai military doesn’t even want to acknowledge the existence of Myanmar refugees in Thailand because that alone could upset Myanmar’s military leaders, says Patrick Phongsathorn, human rights specialist with the Asia-based group Fortify Rights.

The Thai military is intent on controlling the situation, controlling the narrative, because obviously they have political skin in the game, in what’s happening in Myanmar, he says. They are very close with the Myanmar junta authorities.

Kitcharoenrungroj, the Thai governor, seemed to hint at this: When the fighting stopped, they had to go back, he said of the refugees Thailand returned. Otherwise, it could be a sensitive issue for the relationship between both countries.

Win, a 23-year-old chemistry student who lives on the Myanmar side of the river, now regularly wades through chest-deep water to retrieve food from the Thai side. Then he wades back to his campsite in Myanmar, where he lives alongside around 300 other refugees.

They are surviving, but only just. What he wants more than anything, he says, is the one thing he cannot have.

I just want to go home, he says. I do not want anything else. 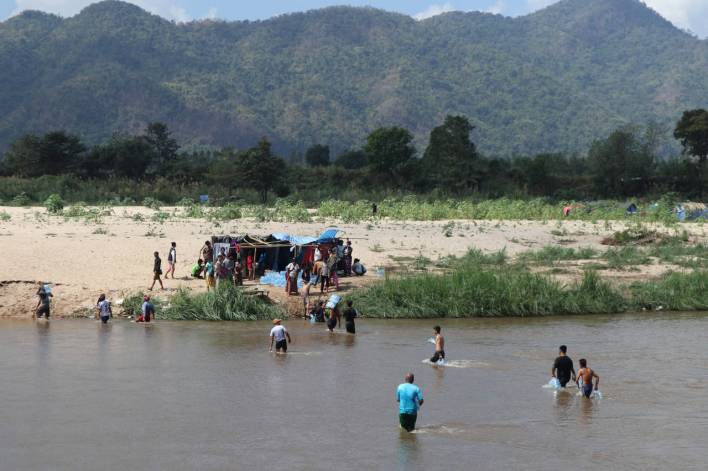