Disgraced For defrauding investors, Elizabeth Holmes, the CEO of the faltering blood testing company Theranos, received a sentence of more than 11 years in prison on Friday. Her actions turned her become a symbol of Silicon Valley ambition gone wrong. The punishment given by US District Judge Edward Davila was far harsher than the leniency her defence team wanted for the mother of a year-old boy with another kid on the way, but it was still less than the 15-year term sought by federal prosecutors.

Holmes, 38, faced a maximum sentence of 20 years in prison. A sentence of no longer than 18 months was requested by her legal team, preferably with house arrest. According to Rachel Fiset, a defence attorney who has also worked in medical malpractice cases, “This is a pretty hefty penalty.”

The scheme revolved around the company’s claims to have developed a medical device that could detect a variety of diseases and conditions from an a few blood clots. In January, Holmes, who presided as CEO throughout the turbulent 15-year history of the company, was convicted of participating in the fraud. The technology was never usable and the claims were false.

The court claimed that Theranos’ hopes were destroyed “by misrepresentations, arrogance, and simply plain falsehoods.” On several ways, this situation is worrisome, according to Davila. “What gave Ms. Holmes the reason for her actions? Was there a lack of morality? Business publications sometimes hailed Holmes as the next Steve Jobs due to her fast rise and put her on their covers. In addition, she deceived a lot of skilled investors, including the Walton family, who founded Walmart, and media moguls Larry Ellison and Rupert Murdoch. She cried as she informed the judge that she was sorry for what she had done.

With every cell in my body, I lament my shortcomings, Holmes added. She made a commitment to Davila that she would spend the rest of her life trying to assist people. Kevin Downey, Holmes’ attorney, said she will challenge the verdict. Holmes and her family managed to elude reporters and cameras as they exited the courthouse through a side door.

Before imposing the sentence, Davila reflected on Silicon Valley’s transformation from an agricultural centre populated by farmers and ranchers to a “crucible of innovation” brimming with young businesspeople with big dreams. He talked nostalgically of “honest, hard labour” as he recalled the beginnings of technological pioneer Hewlett-Packard in a modest garage in Palo Alto, the same city where Theranos was headquartered.

The judge remarked, “I would hope that will be the legacy and continuance of this valley. Former federal prosecutor turned defence lawyer Amanda Kramer compared the sentence to a neon, flashing billboard that serves as a “reminder that the long-term consequences of fraud far outweigh any short-term gains.” Another turning point in a story that has been examined in an HBO documentary and a critically acclaimed Hulu series was the sentencing, which took place in the same San Jose courtroom where Holmes was found guilty on four counts of conspiracy and investor fraud. 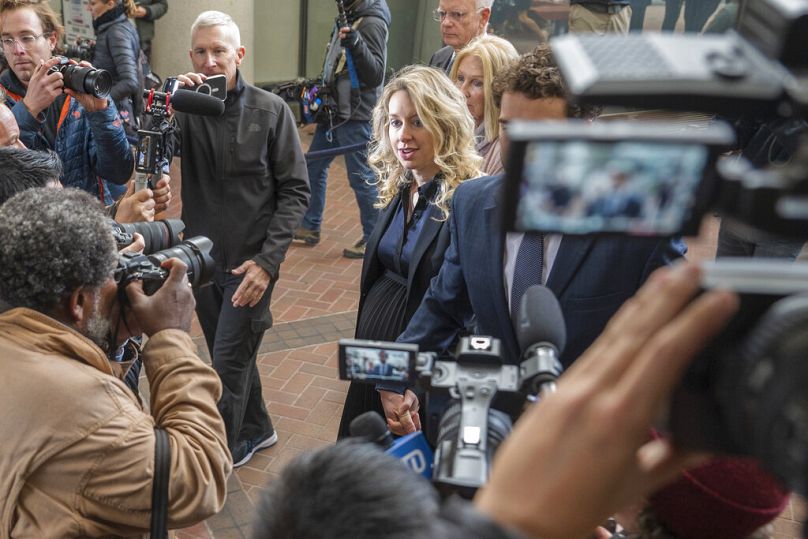 Her attorneys stated that Holmes was a devout mother who had previously been a well-intentioned businesswoman. More than 130 letters from loved ones, acquaintances, and former coworkers complimenting Holmes backed up their positions. If the writers of the letters had seen and heard all of the evidence presented to the jury, Davila hypothesised that the letters might have struck a different tone.

In addition, the prosecution demanded that Holmes pay $804 million in restitution, which accounts for the majority of the nearly $1 billion in funding she received from investors. The court did not set a hearing to address that issue, though. Members of the influential Theranos board that Holmes used to court investors included James Mattis, a former defence secretary who testified against her during her trial, and Henry Kissinger and the late George Shultz, whose son Alexander criticised Holmes for coming up with a plan that “played Shultz for the fool.”

Tyler Shultz, a former Theranos employee turned whistleblower who assisted The Wall Street Journal in exposing the flaws in the company’s blood-testing technology, made a brief appearance Friday to denounce her for terrorising his son. Alexander Shultz lambasted her for doing so.

Alexander Shultz claimed Holmes hired private investigators to follow Tyler before the first of several Journal articles appeared in October 2015. Tyler was so terrified by the surveillance, according to Alexander, that he started using a knife to sleep in his bed. Prior to being sentenced to prison on April 27, the judge granted Holmes more than five months of freedom, which should allow her to give birth to her second child. Just before her trial began last year, she gave birth to a son.

If Holmes’ pregnancy played a factor in her sentencing, the choice may be contentious. Over a 12-month research period, more than 1,000 pregnant women entered federal or state prisons, and 753 of them gave birth while they were in detention, according to a 2019 study. In a 2016 poll, conducted by the Bureau of Justice Statistics, 58% of women entering federal prison said that they were mothers of young children.

Kramer remarked that it appeared to be obvious that Davila did not let the pregnancy affect his decision-making. His sentence “was a lesson in the blindness of justice; whether you are a woman, a mother, or a powerful figure, you are still going to be treated equally under the law.”

Theranos’ fraud was one of the most egregious white-collar crimes ever committed in Silicon Valley, according to federal prosecutor Robert Leach. Leach pleaded with the judge to issue a warning to rein in the hubris and exaggeration that the tech boom of the past 30 years unleashed in a harsh 46-page memo. Leach requested the judge to take into account the health risks caused by Holmes’ actions despite the fact that Holmes was cleared of four counts of fraud and conspiracy related to clients who used Theranos blood testing.

The tests produced wildly unreliable results that might have led patients to the incorrect treatments, according to evidence presented during her trial. The defence team for Holmes portrayed her as a selfless visionary who worked for 14 years to transform healthcare. They claimed that until Theranos’ demise in 2018, Holmes never gave up on trying to advance the technology.

Additionally, they emphasised that Holmes never sold any of her Theranos shares, which were worth $4.5 billion in 2014. What happened to all the money? To the development of technology,” said Downey. Downey urged Davila to consider the alleged sexual and emotional abuse Holmes allegedly experienced while she was romantically involved with Ramesh “Sunny” Balwani, who later joined her in her crimes and rose to the position of top executive at Theranos, in court documents. After a trial in July, Balwani, 57, was found guilty on 12 counts of fraud and conspiracy, and he will receive his sentence on December 7.

Theranos scandal information you need to know Since the initial publication of John Carreyrou’s shocking report in 2015, the Theranos scandal has dominated headlines and has simultaneously fascinated and horrified readers all over the world. Read on to learn the entire story up to this point and what is expected to happen next regarding the Theranos controversy in light of the upcoming TV adaptation The Dropout, which is scheduled to premiere in March.

Theranos, a blood-testing firm that promoted a purportedly groundbreaking technology, was on the rise in 2014. Theranos claimed to be able to run hundreds of tests (possibly over 240), ranging from cholesterol levels to intricate genetic analyses, using just a single pinprick of blood, whereas prior technology required one vial of blood for each diagnostic test completed. Theranos appeared to be providing technology that might change medicine and save lives all across the world since it was automated, quick, and affordable.

Elizabeth Holmes, the company’s founder and CEO, famously dropped out of Stanford to launch Theranos with the help of her tuition funds. She was only 30 years old at the time the company reached its zenith. The company, which had received over $700 million in investment from notable investors like Larry Ellison and Tim Draper, had emerged as the brightest star in Silicon Valley and was valued at over $9 billion; Holmes, who owned more than half of that value, was hailed as the female Steve Jobs.

In 2015, the story was first reported by Wall Street Journal reporter John Carreyrou, a two-time Pulitzer Prize winner. John’s interest was further piqued by Holmes’s alleged capacity to create ground-breaking medical technology after just two semesters of chemical engineering classes at Stanford after receiving a tip questioning the effectiveness of the Theranos technology.

Erika Cheung and Tyler Schultz, whose grandfather George Schultz served on the Theranos board, started talking to John about their experiences with the company, its technology, and its business practises despite intimidation and threats of legal action. They exposed deceit to board members, a climate of fear and secrecy, technology that routinely failed quality assurance, and crucially, results that were fundamentally incorrect and used to base life-altering medical decisions that were sent to actual patients. It would appear that the business was founded solely on bold lies.

Due to the inefficiency of Theranos’ own technology, John was able to publish his report in The Wall Street Journal, exposing the company’s failure to use its own technology to conduct the majority of its tests. Theranos whistleblowers’ knowledge helped to make this happen in major part. Everything stated in John’s report was verified to be true by FDA investigations.

Theranos’ response was remarkable. Holmes initially angrily refuted the accusations made against her and the business. With some Theranos employees even screaming “Fuck you Carreyrou,” John became a perceived enemy of the corporation, and Theranos even threatened to sue him. However, Holmes resigned as CEO and was charged with criminal fraud in 2018 along with former company president Ramesh Balwani for allegedly deceiving investors and making false claims about the effectiveness of the company’s blood testing technology. Following an FBI investigation, the company was officially shut down three months later, leaving thousands of former employees—many of whom John found to be talented individuals with integrity—uncertain about their futures. Holmes was found guilty in January 2022 of four counts of misleading investors and now faces a maximum sentence of 20 years in jail. More details about Theranos’ demise were made public throughout the trial, and the prosecution accused Holmes of deleting evidence during Theranos’ final days of operation. While testifying in her own defence, Holmes acknowledged that Theranos made mistakes, but she insisted that she never intentionally deceived clients or investors.

The Senate control could not be decided by the races