How and Why Did Nokia Company Fail?

Nokia company demise was a shock after years of unrivalled supremacy in the mobile market. Nokia’s handsets’ hardware and battery life were well-known for their strength and power.

It dominated the news for years. Global recognition for Nokia’s mobile devices’ user satisfaction. In 1996, the business introduced the first internet-capable phone, and at the turn of the millennium, Nokia also unveiled a mobile touch-screen prototype.

The mobile phone business transformed as a result of this. In 1998, the massive Finnish company dominated the cell phone industry. A difficult to foresee move saw Nokia surpass Motorola. 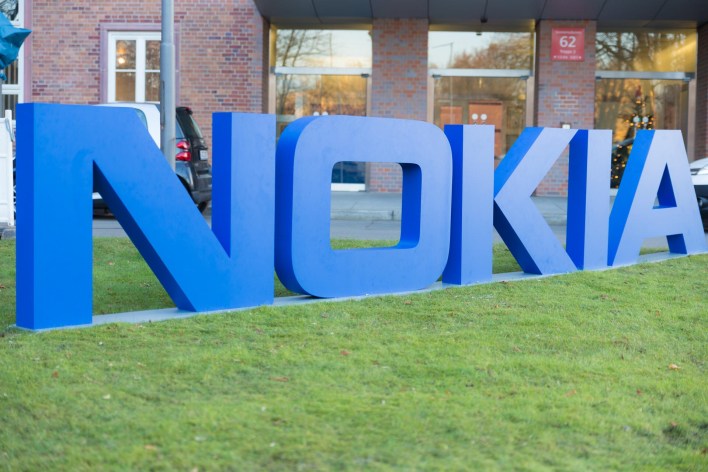 Established in 1865, Nokia Corporation is a multinational corporation specialising in consumer electronics, information technology, and telecommunications. While the company was started in Tampere’s Pirkanmaa neighbourhood, Nokia’s main offices are in Espoo, Finland, a city that is a component of the Helsinki metropolitan area. Over 92,000 people were employed by Nokia in more than 100 countries in 2020, and the company had operations in over 130 countries. Its yearly sales were about €23 billion.

Nokia is listed as a public limited company on the Helsinki Stock Exchange and the New York Stock Exchange. According to the Fortune Global 500, it peaked at 85th place in 2009 and is currently the 415th-largest company in the world by 2016 revenues. It is a part of the stock market index known as the Euro Stoxx 50.

Over the past 150 years, the corporation has operated in various industries. Since the 1990s, the company has concentrated on large-scale telecommunications infrastructure, technological research, and licencing. It was initially started as a pulp mill and had long been connected to rubber and cables. Nokia significantly influenced the development of the GSM, 3G, and LTE standards, contributing to the mobile telecommunications sector.

In 1998, Nokia dominated the global mobile phone and smartphone market for a decade. However, Nokia made many poor management choices in the latter part of the 2000s, which led to a rapid decline in its market share for mobile phones.

After a partnership with Nokia and subsequent market difficulties, Microsoft purchased the company’s mobile phone division, launching Microsoft Mobile as its replacement in 2014. With the sale of its Here mapping company and the purchase of Alcatel-Lucent, which included Bell Labs, Nokia began to concentrate more on its telecommunications infrastructure business and Internet of things technology.

The firm later tried its hand at virtual reality and digital health by purchasing Withings. 2016 saw the return of the Nokia brand to the mobile and smartphone industry thanks to a licencing agreement with HMD Global. Most major mobile phone companies continue to rely heavily on Nokia as a patent licensor. As of 2018, Nokia is the third-largest maker of network equipment worldwide.

Finns had a sense of national pride in the corporation because it was by far the biggest brand and company from Finland globally because of its mobile phone industry. Nokia accounted for 4% of the nation’s GDP, 21% of all exports, and 70% of the market capitalisation of the Helsinki Stock Exchange at its height in 2000, during the telecoms bubble.

See also  Cloudy weather ahead for IBM and Red Hat?

What then caused Nokia to fail? There were numerous factors at play, most of which were brought on by Nokia’s aversion to change. Let’s look at some main reasons behind Nokia’s failure. 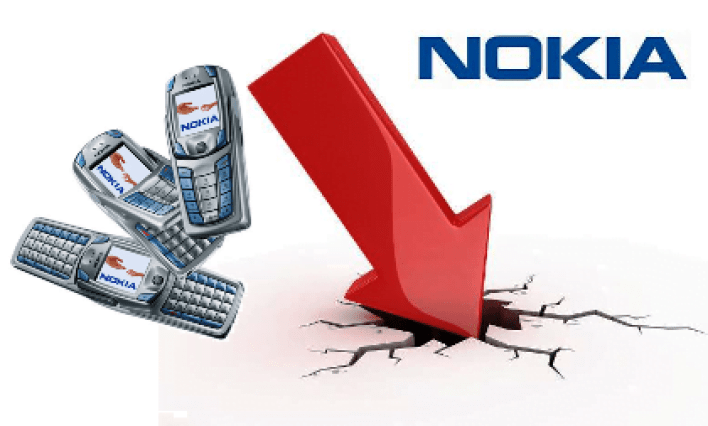 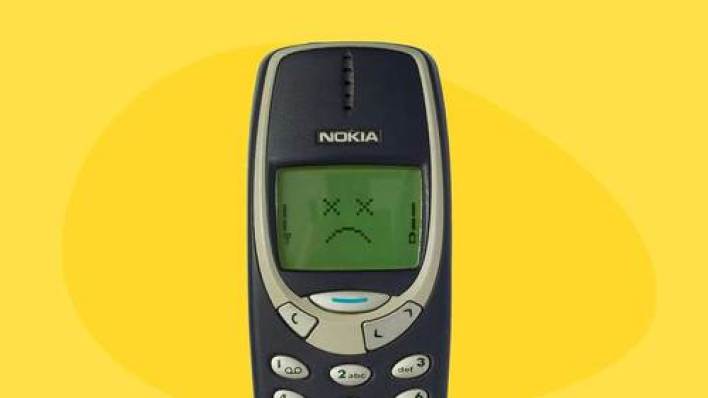 Why Did Nokia Fail?

One of the best-known instances of a disruptive technology eliminating an established competitor in a market is Nokia’s demise. One of the most well-known mobile phone companies in the world was Nokia.

The Nokia N95, introduced in 2007, was Nokia’s response to the smartphone revolution and featured GPS, Wi-Fi, stereo speakers, and a 5 MP camera. These requirements weren’t ground-breaking.

However, it’s possible that the company’s loss was caused less by this specific release and more by its resistance to modernisation and change. Let’s look at five causes of Nokia’s collapse.

1. Not adapting to the environment

Even as the world transitioned to smartphones, Nokia remained tenacious about its feature phones. As a result, many experts predict that feature phones will rule the future of mobile technology. The beginning of its demise was this misunderstanding.

Nokia was hesitant to convert to Android because it thought customers would not switch over and that Android was not the mobile industry’s future. Nokia failed because the management did not view touch screen handsets as essential.

Nokia remained obstinate when cell phone makers were busy enhancing and developing their handsets. Samsung quickly introduced its line of Android-based smartphones with user-friendly and reasonably priced QWERTY keyboard layouts. They were able to make their brand stand out in the market since they were aware of what customers wanted.

Once a well-known brand in the mobile phone sector, Nokia was compelled to sell its handset business to Microsoft after losing market share.

There was a lot of discussion about Nokia’s failure as its market share dropped from 50% to fewer than 5% internationally. Nokia’s resistance to adapt was one of the leading causes of that disaster. As a result, the business failed to recognise how rapidly consumer preferences were changing and lagged behind its rivals.

Due to this, Nokia was forced to sell itself to Microsoft, spreading rumours about the company’s inability to adapt to its changing environment and violating the fundamental law of business dynamics.

The company with the best current business plan is Apple, and you’ll notice that it has never unexpectedly launched a new product. Instead, the business keeps expanding its line of already existing products.

The Nokia marketing plan was unsuccessful; therefore, the company tried to introduce whole new models under other brand names, such as the N series, E series, etc. As a result, buyers found it difficult to decide. Additionally, it failed to develop a brand appeal for these goods.

Nokia could have increased its market share more easily if the corporation had adopted the umbrella branding strategy. Additionally, the business would have increased brand loyalty among its customers and achieved a higher recall value for its products using this technique.

Apple and Samsung have shown success with the umbrella branding strategy. This strategy proposes that the flagship product acts as the umbrella brand. People typically associate Apple with the iPhone and Samsung Galaxy. Nokia, however, isn’t the same as Nokia. People continue to connect Nokia with the Symbian operating system, their feature phones, and their covert marketing tactics.

4. Adapting too slowly to the industry trends

Nokia was established to produce straightforward phones for those who didn’t want to hassle with complex technologies. Although it was successful in that quest, the corporation lagged behind the times and ultimately lost market share to Apple and Samsung.

And when Apple introduced the iPhones in 2007, Nokia suffered a severe blow. After years of uncontested supremacy in the mobile phone business, this proved to be a turning moment in Nokia’s history as they experienced defeat.

Nokia became aware of the necessity to alter their approach as a result, and they also developed new smartphones, but it was already too late; Samsung had already seized Nokia’s spot.

For 14 years, Nokia dominated the mobile phone market. It was the biggest seller of mobile phones and held a market share of 70%. However, the business flopped in the market after only five years.

The business overestimated the worth of its brand. They assumed that if they utilised merely improved software, consumers would still swarm to stores and buy phones made by Nokia, which would maintain market dominance. This is far from reality. 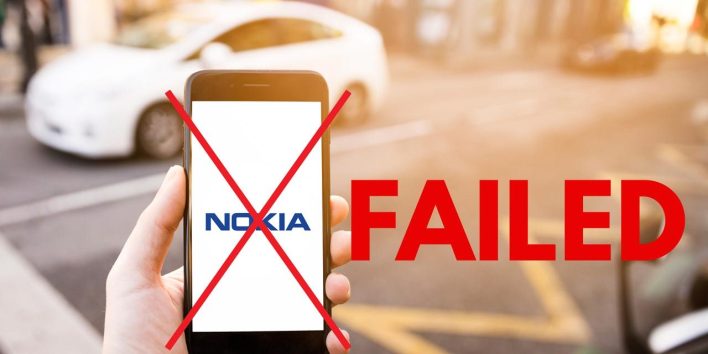 With roots in the paper industry dating back to 1865, Nokia has worked its way up to become one of the top telecoms firms in the world. It represented the potential of technology and was more than just a well-known brand name.

Nokia’s collapse began when it decided to resist change and adaptation. The corporation missed the fact that consumers were no longer interested in buying feature phones; instead, they wanted smartphones, which could perform more functions than just making calls and sending messages.

Nokia miscalculated the influence software will have on the mobile market. The company instead relied on hardware and ran into major problems.

When Apple entered the market with the iPhone, which permanently changed the smartphone sector, the company was no longer able to survive. Poor marketing tactics, quickly shifting consumer preferences, and technology improvements were the main causes of Nokia’s downfall.

Nokia is a well-known international brand that has dominated the smartphone market since 1997. It had a 39 per cent market share and until 2007 was the most famous brand.

However, things started to change after Google and Apple entered the market in 2007. Nokia delayed its entry into the smartphone market because it undervalued the danger posed by new competitors and did not see how the preferences of its customers were changing.

The Nokia failure illustrates how even large companies can lose market share if they can’t adapt to changing conditions and keep an eye on their rivals.

The federal government changes the windfall tax on petroleum, diesel, and jet fuel in 2022.

Bill to set up carbon markets introduced in Lok Sabha