Jyotiraditya Scindia, the recently appointed Union Steel Minister, stated on Friday that India’s steel production would double from the current 120 million tonnes to 240 million tonnes in the next eight years, playing a significant role in the nation’s economy.

Steel plays an important role in the growth of any nation. With 120 MT of production, India is currently the world’s second-largest steel producer.

24 hours after taking on new responsibility as the steel minister, Scindia told reporters, “I am convinced that the aim we have set to double it to 240 MT in the next eight years would be accomplished. I only took over the steel ministry yesterday, and I don’t start giving lectures before I know anything about the industry. I am grateful to Prime Minister Narendra Modi and other leaders for placing their trust in me. I will need some time to learn about the ministry and the sector,” said Scindia.

According to him, the middle- and small-scale industries contribute significantly to the steel industry, accounting for roughly 50–52 per cent of production through their roughly 3,000 units.

“I will make sure that the country’s steel production will increase by taking small and medium-sized businesses along with the large ones,” he declared.

According to Scindia, steel is crucial to sectors like building and transportation. When questioned about his plans for the business, Scindia responded that he would not comment until he had a conversation with the industry professionals to grasp the situation better.

“I don’t think in making remarks, only in doing good work. Only 24 hours have passed since I took over the reins, and I still don’t know everything. Give me some time, just as you did when I was appointed the minister of civil aviation,” he said.

“I don’t think in making remarks, only in doing good work. Only 24 hours have passed since I took over the reins, and I still don’t know everything. Give me some time, just as you did when I was appointed the minister of civil aviation,” he said.

On Friday, Scindia celebrated one year in his position as minister of civil aviation. He emphasised his efforts to improve flight connectivity and invest in new airports.

He added that the Prime Minister would open a new airport in Jharkhand’s Deoghar the following week.

Additionally, a new flight would be started from Kolkata to Deoghar. He added that the Prime Minister would open a new airport in Jharkhand’s Deoghar the following week.

Additionally, a new flight would be started from Kolkata to Deoghar. 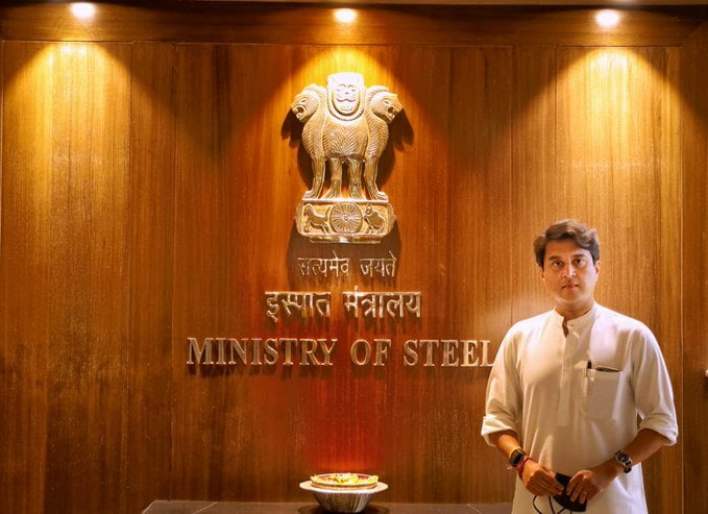 On July 7, Union Minister Jyotiraditya M. Scindia took on the additional responsibility of the Steel Ministry. Currently, Scindia is in charge of the Ministry of Civil Aviation.

The third steel minister in the current Modi administration is the 51-year-old MP who serves as Madhya Pradesh’s representative in the Rajya Sabha. Currently, Scindia is in charge of the Ministry of Civil Aviation.

He removed his shoes and set a Ganesha statue on his office desk in Udyog Bhawan before taking a seat. He assumed leadership in the presence of key ministry officials, including Steel Secretary Sanjay Kumar Singh.

Ram Chandra Prasad Singh, who resigned from the position on July 6, one day before the end of his Rajya Sabha tenure, is succeeded by him. On July 8 of last year, Singh, a former bureaucrat and Rajya Sabha member, took over for Dharmendra Pradhan, who is a Cabinet shuffle, was given the ministries of education and skill development and entrepreneurship.

On July 8 of last year, Singh, a former bureaucrat and Rajya Sabha member, took over for Dharmendra Pradhan, who is a Cabinet shuffle, was given the ministries of education and skill development and entrepreneurship.

According to a formal announcement, President Ram Nath Kovind ordered that the Minister of Civil Aviation Scindia be given additional responsibility for the Ministry of Steel on July 6 on the advice of Prime Minister Narendra Modi. 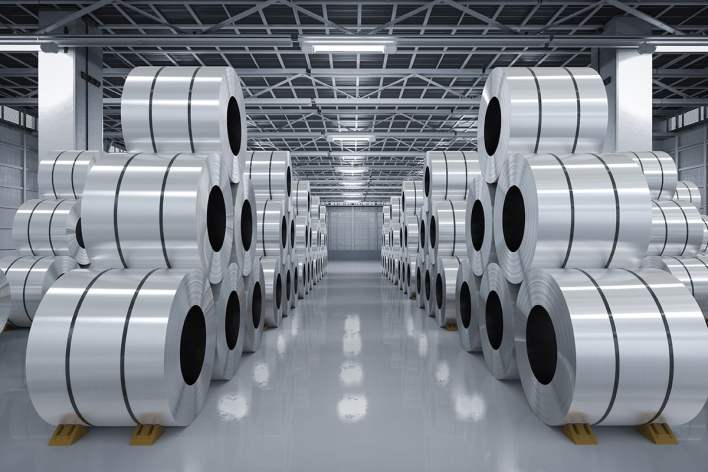 Steel producers are planning to restart expansion projects on the strength of expanding steel processes with a 29 MT capacity gain.

With growing construction activity, the demand for steel is anticipated to rise by 17% to 110 million tonnes in FY22. By 2025, Tata Steel intends to build more scrap-based facilities with a minimum capacity of one billion tonnes. By 2030, Tata Steel in India wants to increase its yearly capacity from 34 MTPA to 55 MTPA.

See also  Don’t Compromise Your Privacy for Fun, Use the Most Encrypted Messaging Apps

Adopting the National Steel Policy 2017 and authorising 100 per cent Foreign Direct Investment (FDI) in the steel sector via the automatic route are only two measures the government has taken to stimulate the industry. FDI inflows into Indian metallurgical sectors were US$16.1 billion between April 2000 and December 2021, according to statistics made public by the Department for Promotion of Industry and Internal Trade  (DPIIT).

By 2030–2031, the government’s National Steel Policy 2017 seeks to boost the per capita consumption of steel to 160 kg. The government has also supported a policy that requires notified steel goods covered by preferential procurement to have a minimum value addition of 15%.

The government implemented a steel scrap recycling policy to decrease imports in 2019. The developments taking place in numerous industries benefit the industry as well. Since the programme allows for recycling the components used in outdated automobiles, it will aid in lowering the price of steel. Major steel companies are currently producing more oxygen cylinders for COVID patients than they can handle on the healthcare front. Indian Railways intends to purchase more than 11 lakh tonnes of steel from Steel Authority of India Limited (SAIL) in 2021 for track resurfacing and the construction of new lines around the nation.

JSW Steel invested Rs. 150 billion (US$ 19.9 million) in October 2021 to expand manufacturing in Jammu and Kashmir by constructing a steel plant there.

The joint venture steel company in India between ArcelorMittal and Nippon Steel Corp. announced in October 2021 that they would invest Rs. 1 trillion (US$ 13.34 billion) over ten years to increase their activities there.

The government released rules for the authorised production-linked incentive (PLI) plan for speciality steel in October 2021.

India and Russia inked an MoU in October 2021 to conduct R&D in the steel industry and generate coking coal (used in steel making).

Steel companies have finalised their plans to invest Rs. 60,000 crores (US$ 8.09 billion) over the next three years, according to Mr T.V. Narendran, CII president and MD of Tata Steel, who made this claim in a June 2021 interview with The Telegraph. This is the largest private sector investment plan to be announced in recent memory.

The Union Cabinet approved the production-linked incentive (PLI) plan for speciality steel in July 2021. The plan is anticipated to bring in totalling investment of Rs. 400 billion (US$ 5.37 billion) and increase the capacity of speciality steel by 25 million tonnes (MT), from 18 MT in FY21 to 42 MT in FY27.

In FY22, crude steel output is anticipated to rise by 8 to 9 per cent YoY to 112-114 MT, according to CARE Ratings. The economic rebound, government spending, and more liquidity will all help to meet this need. The Union Budget 2021–22 allocates 5.54 lakh crore (US$ 74.60 billion) for capital expenditures, a 34.5 per cent YoY increase. The budget emphasises developing manufacturing and infrastructure to boost the economy. Additionally, increased spending on important industries like defence services, railroads, roads, transport, and highways would boost steel demand. 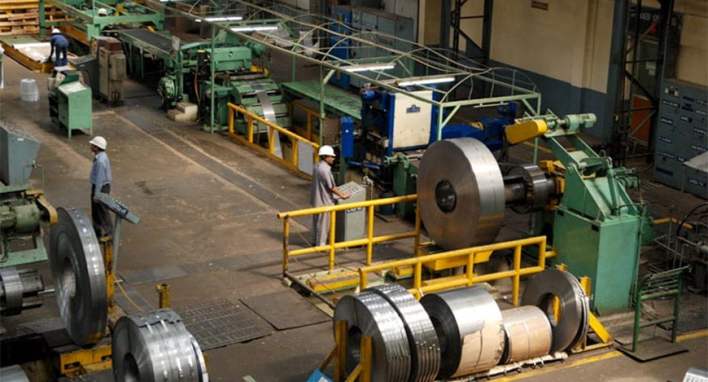 At 7.5%, India’s steel demand in 2022 to be the highest among major consumers

The World Steel Association (WSA) predicted that among the top steel consumers, including China and the US, India’s steel demand growth in 2022 will be the highest at 7.5 per cent due to increased infrastructure spending and a gradual recovery of the car industry.

However, the demand for steel will decline globally this year from the 2.7 per cent seen last year to just 0.4 per cent. The Worldsteel Economics Committee’s Maximo Vedoya stated, “For 2022 and 2023, the prognosis is quite uncertain. The Ukraine conflict and the inflation increase have cast doubt on expectations of a steady and ongoing global recovery.

India will continue to have the second-highest rate of growth in steel demand in 2023, with a 6% increase, trailing only Germany, where demand is anticipated to increase at a faster 7.6% rate. But only one-third of what India eats each year is consumed in Germany.

“In 2022, infrastructure investments and a slow recovery in automobile output, along with an anticipated increase in semiconductor supply would probably help India’s building and manufacturing. Greater local mining output and assistance for the capital goods sector are anticipated as a result of expected raw material supply limits on the global market,” according to WSA.

According to the report, the war in Ukraine raises the danger of inflation and supply disruption, which might affect consumer confidence and the lenient stance of the Indian central bank.

The war’s effects will also be felt internationally through rising energy and commodity costs, particularly those of raw materials used to produce steel and ongoing supply chain disruptions.

“In addition, increased uncertainty and financial market volatility will discourage investment. Reduced growth projections for the world’s steel demand in 2022 are indicated by worldwide repercussions of the Ukrainian conflict and China’s weak economy,” WSA said.

Why Are Indian Airlines Going Through a Turbulent Phase in 2022? See the details