The Line of Actual Control (LAC) is central to the conflict, and China has been chastised for crossing it, despite the fact that it does not exist on the ground, on any map, or even on a piece of paper.

Another clash between Indian and Chinese soldiers has taken place, this time in the Eastern Sector, with no human casualties on either side.

When such incidents occur, ill-informed opinions are generated in the main media by half-baked “experts,” often based on their political leanings or other factors due to a lack of authentic information. The current incident is no exception, resulting in a barrage of articles and television debates.

The issue revolves around the undefined LAC.

The Line of Actual Control (LAC) is central to the conflict, and China has been chastised for crossing it, despite the fact that it does not exist on the ground, on any map, or even on a piece of paper. It is essentially a line of perception that both countries hold dear for various reasons.

Non-aligned countries, led by Sri Lankan Prime Minister Sirimavo Bandaranaike and representatives from other non-aligned countries, made efforts to mainly bring the two main countries to the negotiating table. However, the efforts were futile, and the problem remained unresolved. Such incidents were possible because the border situation remained fluid.

Both countries also agreed to exchange maps depicting their respective perceptions of the current entire alignment of the Line of Actual Control.

The two countries have also failed to define the critical LAC required to implement the agreement over the last quarter-century. This failure exemplifies their distrust of one another.

The lack of this line is central to the problem. Despite several rounds of talks at various levels, including the highest, the two countries remain at odds, and the border issue remains a source of friction in their relations.

The border between Sikkim and Tibet, which was established in 1896 and is well defined and also recognised by both countries, was marred by one snag: China refused to accept Sikkim’s 1975 merger with the Indian Union. During his 2003 visit to Beijing, Prime Minister Atal Bihari Vajpayee deserves credit for convincing China to accept Sikkim as part of India. This has helped to reduce border incidents along the clearly marked Sikkim-Tibet border.

It takes bravery to face old problems head-on. With the exception of Vajpayee’s administration, successive governments chose to follow Jawaharlal Nehru’s position, which had precipitated the 1962 war. Several chances to settle the dispute were passed up. China’s offer for a quid pro quo settlement, made in 1960 and repeated in 1980 during Indira Gandhi’s tenure as Prime Minister, was allowed to lapse. Since 2014, the current administration has remained committed to the old narrative, declaring the re-establishment of lost territories to be the cornerstone of its China policy. To arrive at an independent assessment, a complete departure from the past and also a fresh look at the old policies are required. A new attempt at negotiating settlement must be made through give and take. In such a scenario, it is obvious that India would be forced to make concessions in areas where it has no or only nominal or tenuous ownership.

The issue with this approach is that it will almost certainly spark controversy, and some elements will seize any opportunity to accuse the government of “surrendering” and “gifting” Indian territory.

The task is challenging, but not insurmountable. It takes willpower. The bull’s horns must be grasped if this more than six-decade-old problem is to be solved.

The only way to mainly solve the problem is to educate the public and form informed opinions. Since the country’s independence, it has been critical that the archives be released and that people have access to them in order to discover some fundamental truth about the past that will help them understand the problem. Half-baked solutions, such as allowing only a portion of the archives to be opened, will only raise suspicions.

In analyses of Chinese incursions mainly along the Line of Actual Control, the undefined nature of the Himalayan border is frequently mentioned (LAC). “There are areas of differing perception along the LAC in the Tawang main sector of Arunachal Pradesh, where both sides patrol up to their claim lines,” a military source told The Indian Express after the December 9 clash. Since 2006, this has been the trend.”

The LAC is currently more heavily contested in the main Western Sector, and incursions into Ladakh are more frequent than in the Eastern Sector.

What is causing the border dispute with China?

After communists took power in China, they demanded that all international treaties and “unequal treaties” imposed on the country during its “century of humiliation,” as well as all of its borders, be renegotiated.

China and India’s borders have never been defined.

China’s Premier Zhou Enlai and India’s Prime Minister Jawaharlal Nehru agreed in April of that year to conduct a thorough investigation into the claims made by officials. Over the next two years, both sides attempted to maintain their claims by stationing troops along the border. During the 1962 war, the PLA easily defeated Indian troops.

What exactly is a Line of Actual Control (LAC)?

The LAC is a point of contention between India and China. The LAC is 3,488 kilometres long in India, but only about 2,000 kilometres in China. The Middle Sector has the fewest squabbles. 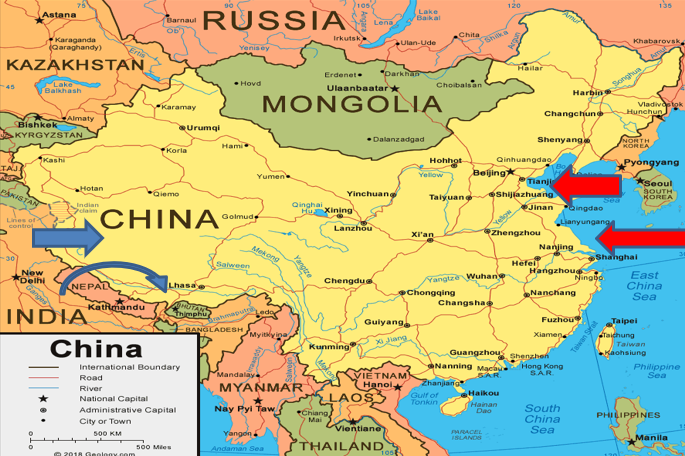 In the Eastern Sector, the LAC follows the McMahon Line, named after Sir Henry McMahon, British India’s foreign secretary, who drew the 890-kilometer line as the border between British India and also Tibet at the 1914 Simla Convention Between currently Great Britain, China, and Tibet.

The line established previously unclaimed/undefined borders between the United Kingdom and Tibet, incorporating Tawang into the British empire. China opposes the high watershed principle and some of the subsequent positions.

According to Shyam Saran’s book ‘How India Sees the World,’ the LAC was discussed during main Chinese Premier Li Peng’s 1991 visit to India, and also India formally also accepted the concept when current Prime Minister P V Narasimha Rao returned to Beijing in 1993. The two main sides signed the main Agreement on the Maintenance of Peace and also Tranquility along the Line of Actual Control, but the reference to the LAC was left unqualified to ensure that it referred to the LAC at the main time the agreement was signed, not the LAC in 1959 or 1962.

What is China’s ostensible claim to Arunachal Pradesh, and how is it justified?

China claims 90,000 square kilometres of territory — the entire state. The region is known as “Zangnan” in Chinese, and “South Tibet” is mentioned several times. On Chinese maps, Arunachal Pradesh is depicted as a Chinese province, and it is sometimes referred to as “so-called Arunachal Pradesh” in parentheses.

China has made a point of emphasising its unilateral claim to Indian territory. As part of this strategy, it has attempted to give Chinese names to locations in Arunachal Pradesh, publishing a list of six such names in 2017 and another 15 in 2021. India has rejected China’s “invention” of these names. “Arunachal Pradesh has always been and will always be an integral part of India,” stated the Ministry of External Affairs in a statement last year. This fact is not altered by giving fictitious names to places in Arunachal Pradesh.”

A plenipotentiary of the Republic of China, which had been declared in 1912 after the Qing dynasty was overthrown, represented China at the 1914 Simla Convention, where the McMahon Line was drawn. (The current communist government came to power with the proclamation of the People’s Republic in 1949.) The Chinese envoy refused to sign the Simla Convention, citing Tibet’s lack of independent authority to enter into international treaties.

What is the US govt’s EAGLE Act, which could benefit Indian immigrants?