U.S. leadership on Syria has been abdicated to Russia and Iran by Biden

Last week’s President of the U.S, Biden’s trip to the Middle East demonstrated that his government has given up on any pretence of American leadership in resolving the Syrian problem.  During his four-day visit, promoted as an example of American involvement in a region where nations like China and Russia are gaining ground, Biden never once spoke to Syria in public. This careless approach to policy imperils American and regional interests and raises the risk of handing over the region’s security to Iran and Russia.

The president failed to offer any new solutions for the political turmoil in Syria. He didn’t issue any public reprimands to the Gulf nations for gradually but steadily eliminating the pariah status of Syrian President Bashar al-Assad, who still commits mass murder. Biden only referenced Syria in his opinion piece for The Washington Post, outlining the purpose of his journey to the Middle East to highlight a U.S. mission that had killed a terrorist there.

During his campaign, Biden harshly attacked President Donald Trump for not doing enough to stop Turkey from bombing U.S.-allied Kurds in northeastern Syria. But Biden has made no comments as Turkey prepares for another such incursion. Due to the absence of the United States, Russia, and Iran, meeting with Turkey this week to discuss Syria, are now in charge of diplomacy.

Moscow and Tehran are extending the military alliance they established in Syria to the conflict in Ukraine. Russia is killing civilians in Ukraine using the weapons it tested on civilians in Syria. In addition, Russia is also waging war against the local Syrian forces assisting American troops in their fight against the Islamic State.

The Biden administration is perceived as being ineffective by many Syrians. Omar Alshogre, who spent three years in Assad’s prisons, criticized the United States for not keeping its commitments on June 29 at the U.N. Security Council.

He declared, “The United States, your administration has recently been largely confined to hollow rhetoric, no deeds.” “You should be the head of the democratic world,’ they said. In this worldwide setting, I hardly even recognize you anymore. Jordan’s administration came under fire from Alshogre for barring its doors to Syrian migrants. He also blasted the United Arab Emirates for hosting Assad in March as part of efforts to get him back into good standing with the international community.

“United Arab Emirates, don’t you regard those who have endured years of pain, for everyone who perished in Syria as a result of torture, and for every mother who has lost a child? It’s wrong to normalize Assad, the man declared. “You’re a disgrace.”

According to a National Security Council official, Syria “Is a common topic of communication” with American allies in the Gulf, and the administration has “constantly engaged in quiet diplomacy on Syria.” The spokeswoman emphasized that official statements released following Biden’s talks with the presidents of Saudi Arabia, Jordan, Egypt, and Iraq last week addressed Syria.

The spokeswoman declared, “We have not withdrawn sanctions placed on Syria. We continue to discuss Syria with our Gulf allies to warn against any moves that would legitimate the Syrian dictatorship.

While it is true that the Biden administration has not eased any sanctions against Assad, they have also not carried out any of the measures required by the Caesar Act, which imposes penalties on any nation or entity that cooperates with the Assad government. In truth, the administration has done little as Assad benefits from a new regional conflict.

The only area the Biden team has been involved in Syria, is at the U.N., where the American delegation fought to protect the only remaining route for humanitarian aid that supplies food and medication to millions of Syrians in Idlib province who live beyond the regime’s authority. Even there, the U.S. agreed to a Russian-drafted resolution that put a six-month time restriction on the assistance route extension. 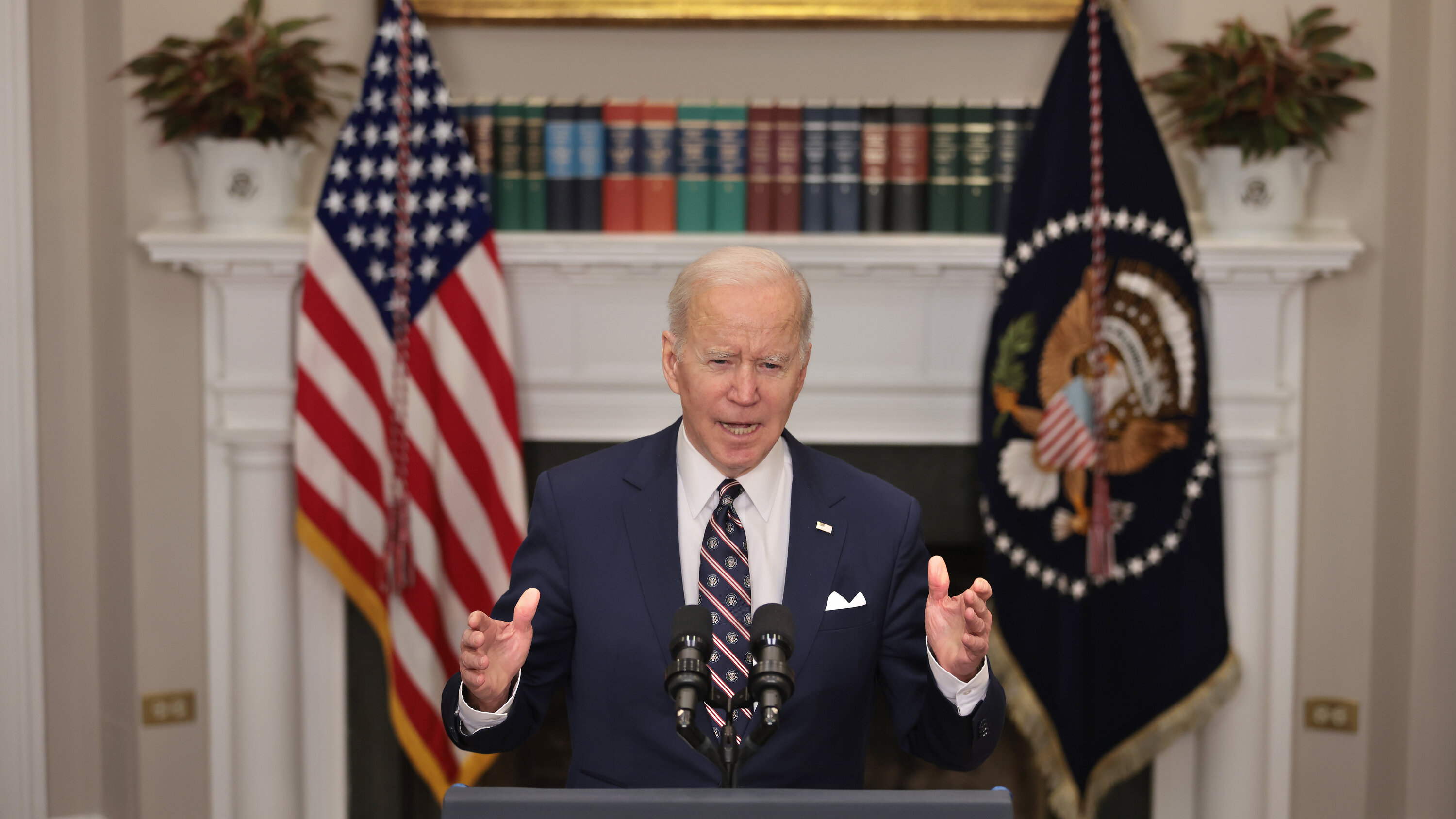 According to administration officials, the most the United States can hope for in Syria is maintaining comparatively low levels of bloodshed while concentrating on assistance and terrorism. However, the levels of violence only appear modest if one ignores the reality that Assad and Russia are torturing tens of thousands and starving millions of innocent people on purpose. Syria can never establish a lasting peace as long as Assad’s allies in Moscow and Tehran control international relations. Without renewed diplomatic efforts spearheaded by the United States, Syria will continue to export refugees, terrorism, drugs, and instability. Biden’s administration admitted that before assuming office.

Two months before the 2020 election, Antony Blinken, then-candidate Biden’s foreign policy adviser and now secretary of state, told me, “We failed in preventing a tragic loss of life as well as millions of people made into refugees or internally displaced, and that’s something that we all have to live with.” This is one of the things we are paying close attention to, and if we are given the obligation, we will have to take action. Now that Biden is in charge, he must take action. The Syrian problem must continue to fester, and the Syrian people cannot continue to suffer if the United States is to be a leader in the Middle East.

Moral Resignation by the U.S., Russia, and Israel Jerusalem was obliged to compromise its values for existence due to Obama’s carelessness in Syria and the Iran nuclear agreement.

The public debate regarding Israel’s response has become inevitable as Vladimir Putin’s brutal attack on Ukraine takes shape. The supporters of realpolitik, including many Israelis, are on one side and believe that Israel’s struggle against terrorism on its northern border requires cooperation with Russia. A few moralists, including me, are on the opposing side and demand for Israel to stand firmly opposed to Mr Putin with the rest of the civilized world because they see Mr Putin’s conduct as the greatest threat to freedom.

The authorities of Israel have chosen a careful course between the two. Over the weekend, Prime Minister Naftali Bennett spoke with Volodymyr Zelensky of Ukraine and visited Mr Putin in the Kremlin. The Israeli government rejected last week to co-sponsor a United Nations Security Council resolution against the Russian invasion along with 81 other nations. Mr Zelensky has frequently asked the Israeli government for military assistance.

Israel, however, donated a sizable amount of humanitarian supplies and spoke out against the Russian incursion at the U.N. The acts of Mr Putin should be condemned by all nations that uphold democracy and human rights. Yet a crucial point has been overlooked when former U.S. Defense Secretary William Cohen tells a reporter he is “deeply disappointed” with Israel and demands that we choose between Russia and the U.S. Israel’s dependence on Mr Putin was caused by America’s lack of moral clarity, not the other way around.

How did this take place? The terrible response by President Obama to Syrian tyrant Bashar al-use Assad’s chemical weapons against his people was the first significant development. Regarding the Syrian crisis, Mr Obama proclaimed chemical weapons to be a “red line” in 2012. If Mr Assad crossed this line, he would be subject to military action. In the Damascus suburbs under rebel control, rumours of a severe chemical weapons strike appeared in 2013. Numerous civilians died, hundreds of them. However, the Obama administration postponed taking action, and the support for military involvement waned, sparking a difficult humanitarian situation.

Mr Putin took advantage of the U.S.’s pullback from Syria, which he perceived as a demonstration of weakness on his part, to promote his plan to restore Russia’s great power position. 2014 saw his invasion of Crimea. He created a military facility in Syria’s Khmeimim in 2015 and started conducting airstrikes to bolster Mr. Assad’s forces there. He had two opportunities to put his military prowess to the test. His presence in Syria ensured he would maintain control of Syrian airspace.

The 2015 nuclear agreement with Iran was the latest step in the United States’ moral leadership retreat. In return for billions of dollars in cash, the pact did not require Iran to respect human rights and stop funding international terrorism. Most of these finances went to Hezbollah, which converted itself from a partisan organization into an army by establishing bases in Syria and continuing its operations there and in Lebanon.

Israel was forced to collaborate strategically with Russia to take on Iran and its proxies. Israel must consider Russia’s involvement in Syria while defending itself against terrorist attacks and obtain Mr Putin’s approval before carrying out airstrikes against Syrian targets. Even today, during Mr Putin’s harshest aggressions, this agreement, which was started under Prime Minister Benjamin Netanyahu, makes Israel dependent on Russia’s goodwill.

An impending nuclear agreement with Iran will worsen the situation by providing the government with additional funds without any connection to how it behaves. Israel will consequently rely on Russia even more. Without moral coherence in Europe and the United States, Israel would not have been compelled to choose between its values and existence. The same free world currently united in its opposition to one tyrant is about to sign an agreement with the same dictator to transfer hundreds of billions of dollars to another repressive, corrupt government that has threatened to destroy Israel.

It’s not too late to reverse this situation. One choice is to put the most recent nuclear deal with Iran on hold and make it evident to Tehran’s theocrats that their aggressions won’t be tolerated or even rewarded. If an agreement is unavoidable, another option is to condition Iran’s financial help on its verifiable promise to defend human rights at home and stop encouraging terrorism abroad. This straightforward option, which the Obama and Biden administrations have so far refused to implement, would demonstrate moral clarity and challenge Mr Putin’s rising global influence.

My government’s unwillingness to vehemently criticize Russia’s activities in Ukraine, which constitute a test for the free world, is depressing. However, the fact of Israel’s reliance on Russia demonstrates once more that for the United States to lead the free world in opposing tyranny, its actions in doing so must be transparent and consistent.

The world's strongest passport is Japan. India's rank is……

The rupee's next source of woe is it's $79 billion in unhedged debt. What should Investors do?