The Swedish steel industry is based in the small town of Hofors, which is about 220 km from Stockholm. Its steel mill, which Ovako owns and runs, has been in business since 1604.

During the pandemic, the steel mill considered doing something different. It did a test to see if green hydrogen could be used instead of fossil fuels to make steel. There were no CO2 or SOx emissions, which are bad (sulphur oxide). When hydrogen is used as a fuel, it only gives off water.

Ovako’s is one of the few pilot projects going on worldwide that could change how steel is made and help cut down on pollution. 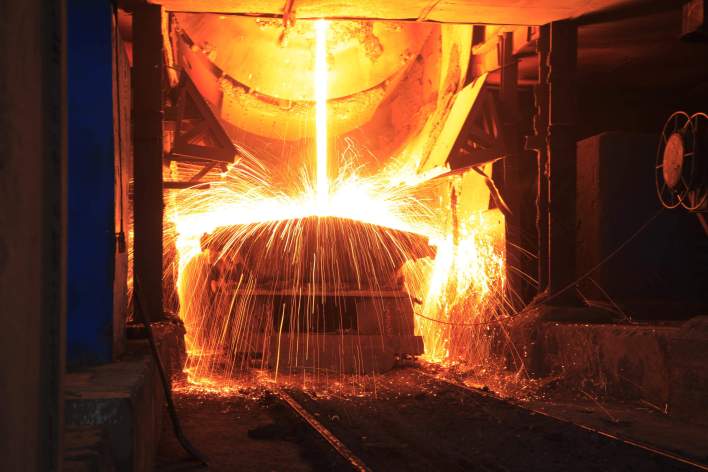 In India and worldwide, the direct CO2 intensity of making crude steel has been pretty stable over the past few years. In the net-zero emissions by 2050 scenario, on the other hand, it needs to drop by an average of 4% per year between 2020 and 2030, according to the International Energy Agency (IEA). India’s government will likely order the steel industry to reduce pollution.

But no gird plant in India is using green hydrogen or even doing tests. Before we tell you why to, let’s take a quick look at how India has always made steel.

The old way of doing things

India is not only the second-largest country in the world that makes steel, but it is also one of the cheapest, making it easier for India to compete in the car and industrial equipment markets. In FY20, India produced 111 million tonnes (MT) of crude steel each year, and in FY22, that number went up to 120 MT. But coal is used for most of this capacity.

Forty-four percent of the production is made with the blast furnace-basic oxygen furnace (BF-BOF) method, while 55 percent is made in electric furnaces. IEA data from 2019 shows that 30% of production comes from electric arc furnaces (EAF) and 26% from induction furnaces.

Blast furnaces are where iron ore and coking coal are combined to make gird, and this is the primary way JSW, Tata Steel, and SAIL make steel in India. 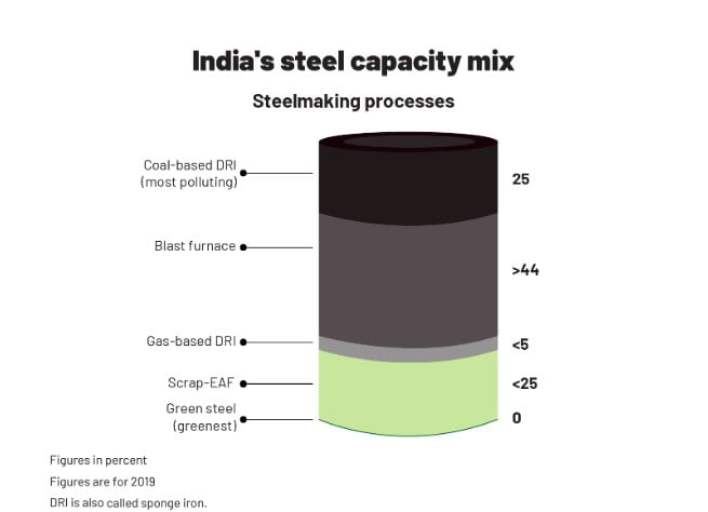 There are a lot of companies that make electric furnaces. As of March 2019, the country had 47 EAF and 1,128 induction furnaces. These companies use sponge iron, scrap metal, and coal that isn’t used to make coke for making steel.

Indian steel makers are not sure what to do.

Green hydrogen is the most environmentally friendly or sustainable form of hydrogen. It is made from renewable energy sources in a way that doesn’t affect the climate (wind, solar power, etc.). Like blue and grey hydrogen, others have “low carbon,” but they are not entirely climate neutral.

See also  A fashionable disinfectant: Cologne 555, Egypt's perfume from a century ago resurrected by the Coronavirus

With the help of an electrolyzer, water can be split into hydrogen and oxygen. Green hydrogen is the best way for steel companies to reduce pollution. But Indian steelmakers haven’t gotten excited about the idea yet.

“Reducing emissions and climate concerns are better understood now, but the technology to use green hydrogen on a large scale is not well-developed,” says VR Sharma, managing director of Jindal Steel & Power. He gives several reasons, such as using a coal-fired plant to make green hydrogen would defeat the point.

Most of the electricity in Sweden comes from sources that don’t use fossil fuels, like wind, nuclear, or hydro. This makes CO2-free hydrogen.

Prabodha Acharya, chief sustainability officer at JSW Steel, India’s most valuable steel maker based on market capitalization, says that 80–85% of carbon emissions happen when iron ore is turned into hot metal using coking coal or coal. The Indian steel industry puts out more pollution because its iron ore isn’t excellent, so it needs to burn more coal, and because a lot of its sponge-iron facilities are based on coal.

Partner at Deloitte India Anish Mandal says that green hydrogen will be mainly used as a reducing agent to make direct reduced iron (DRI), also called sponge iron, and as a fuel mixed with pulverized coal in a blast furnace. In many places around the world, pilot tests are being done for both apps.

If the reductant is changed, the most pollution will be cut out of the steel-making process. Hydrogen can be used as a reducing agent instead of coal, making water instead of CO2 a byproduct.

Here’s how the two work together:

Green hydrogen, on the other hand, is harder to make. The steel industry has used hydrogen as a reducing agent in the form of syn-gas for a long time. The challenge is to produce hydrogen without releasing CO2. Sharma of Jindal Steel & Power says, “If you want green hydrogen, you need green energy. As of right now, there is no large-scale green energy in India, and more than 70% of the power comes from coal-based plants. So, green hydrogen is still a long way off.

Through the electrolysis of water, there is now a way to make hydrogen without releasing CO2. But this process needs a lot of renewable energy to work.

For example, a 1 MTPA (million tonnes per annum) DRI facility needs a 400 MW electrolyzer, which requires 1,600 MW of renewable electricity. If this electricity comes from solar panels, about 8,000 acres of land would be required.

To make 1 tonne of DRI-EAF steel, you need between 70 kg and 80 kg of hydrogen. At the price of hydrogen right now, which is between USD6 and USD7 per kilogram, it costs around USD500 per tonne to make crude steel sustainably, and this is a lot more than USD$200 for using coking coal to produce 1 tonne of crude steel.

See also  COVID-19 Pandemic: You Might Have To Say Goodbye To Cheap Gym Subscriptions!

Industry sources say that the price of green hydrogen must drop below $1 to $1.5 per kg before it can compete with the BF-BOF process. For industrial uses, this price can be reached by 2030 if the government proactively promotes the green hydrogen economy.

Sharma says, “Green hydrogen can be used instead of fossil fuels, but there isn’t any of it available right now.” 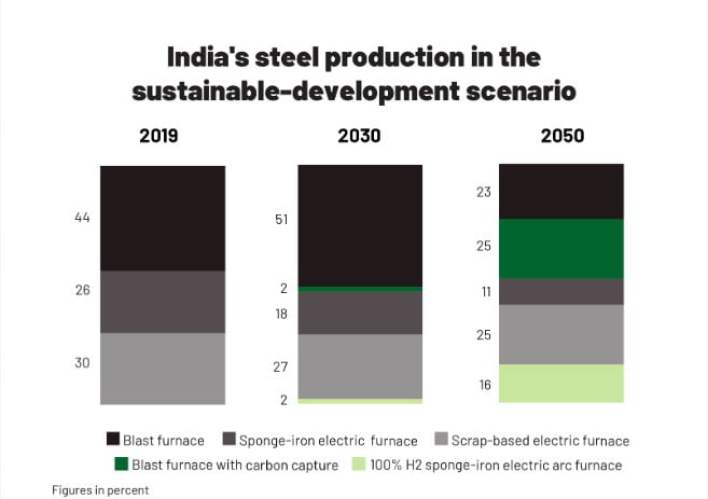 Another problem is that most of India’s gird plants are in the eastern part of the country, in places like Orissa, Jharkhand, Bihar, West Bengal, and Chhattisgarh. But no solar or other renewable energy plants are being built there. The gird companies want to buy clean energy, but there aren’t any sellers.

“If coal is used to make hydrogen, it will cost about half as much as fossil fuel. But if it is made using solar energy, the cost of building the plant is very high, and hydrogen will be much more expensive than fossil fuels,” says Sharma.

He thinks that the answer is to turn coal into hydrogen and then use it to make steel or DRI by putting it into the blast furnace.

It thinks that the following are the most important ways to reach the goal by 2030:

Efficiency in process and energy use.

Change the way we get our energy. By 2030, we should be using only renewable energy and no fossil fuels to make electricity.

The fuel rate (coke rate) went down because the quality of beneficiated iron ore improved.
Natural gas and injecting hydrogen into blast furnaces are two low-carbon fuel sources that could be used instead.

The use of scrap materials in the production process will go up.
Use green hydrogen and carbon capture utilization (CCU) as pilot projects that can be scaled up based on how well they work from a business perspective.

The 100-tonne-per-day CCU plant at JSW Steel in Salav, Maharashtra, takes carbon dioxide from the exhaust gases made by sponge-iron operations and purifies it to 99.5 percent purity. This is being sold to people in the food and drink business.

Even though prices are high worldwide, the steel industry is not adding more capacity because they are afraid that carbon emissions will be costly and that making green steel is more arduous. But in India, companies are expanding their power by a considerable amount, and this is because rising steel prices are bringing in a lot of cash.

See also  How BJP has dug its own grave due to the Farmers protest, even as the entire nation stands in support of the farmers, will BJP end its dictatorship mode and listen to the protesting farmers?

Since gird plants last 30–40 years, we need to switch to a greener way of making steel, and the government needs to explain how it plans to regulate and support greener growth.

For investors, ESG (environmental, social, and corporate governance) has become a clean factor for funding, and JSW’s sustainability-linked bond, where the company’s KPI (key performance indicator) is linked to CO2 emission, was subscribed five to six times, which lowered the cost of debt funding by 30 to 50 bps. In September 2021, JSW sold USD500 million in sustainability-linked long-term bonds, and this was the first sustainability-linked dollar bond in the steel industry worldwide.

The EU’s system for trading emissions will get a lot tougher for steelmakers between 2030 and 2032. So, Europe is the world leader in using hydrogen pilots to make steel.

In its most recent call with investors, Tata Steel talked about how it plans to help Europe eliminate carbon emissions. Tata Steel wants to replace blast furnace-based steel-making in the Netherlands with DRI-based steel-making by 2030. It plans to switch step by step to gas and then to hydrogen. The company will pay for this capital expenditure. In the UK, it wants to use more scrap metal to make steel, and for economic reasons, it is talking to the UK government about getting help.

India exports a lot of gird to Europe, and the EU will likely start charging a carbon border adjustment mechanism (CBAM) tax in 2026. Based on the average emission profile, Indian steel exporters may have to pay INR5,000 CBAM for each tonne of steel they sell in the EU.

Sweden and Germany both have governments and private organizations that help fund projects related to hydrogen. In India, businesses can do large-scale tests and projects with the help of funding. Acharya from JSW thinks that the government should give people incentives to work on hydrogen until the process is good enough to be profitable.

Mandal of Deloitte says, “We could see some progress in the gird industry with green hydrogen after 2030. Once the price of green hydrogen falls below USD2/kg, it will likely be possible to make a lot of green gird. These installations can also be driven by companies’ net-zero emission goals and internal carbon pricing frameworks.”

Most analysts think that a blast furnace is needed to make special-grade gird with high strength. IEA believes that only 2% of steel will be made using the 100% hydrogen route in the sustainable development scenario in India, and this number will go up to 6% in 2040 and 16% in 2050.

Mandal says that green hydrogen will depend on the projected price curves of renewable energy, the cost of the electrolyzer, and the internal pricing framework for carbon.

The infrastructure for fossil fuels has been there for decades, if not centuries. There have been billions of dollars spent on old equipment. The move away from traditional steel-making methods will happen slowly because green hydrogen is expensive. A lot will depend on government mandates, as we see in Europe, followed by tech improvements and economies of scale.

The LIC grey market premium has faded, and the stock now trades at a discount on the unlisted market.

Can cashback receive blue ticks for WhatsApp Pay after a staggered entry and payment failures at banks? 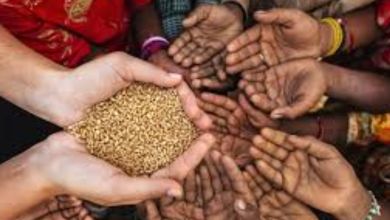 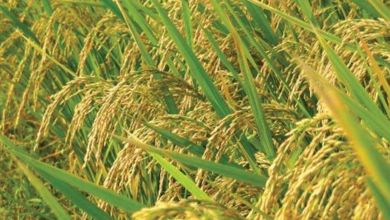 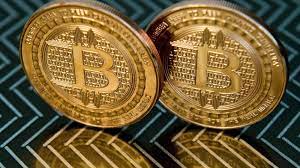 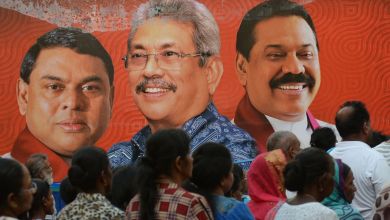 In less than 30 months, the Rajapaksa Dynasty bankrupted Sri Lanka.