Vaccine Inequality has become a rising problem in the world. The pandemic is considerably adding to the growing angst among various nations. Initially, the immediate health crisis had ravaged the economy by causing an immense loss to human life. Now, the preventive tool called vaccine is the very new cause of rising angst among various citizens around the world which has rendered nations powerless with its shortage.

According to the reports, the world economy will effectively lose trillions in GDP due to vaccine inequality that currently plagues the system. It is no news that the rich have it all. This is especially true for the vaccine scenario that is currently playing out on the world stage. The rich resources of the rich countries and their formidable standing in world politics have made it easier for them to gain access to the vaccine. In fact, the inequality is so grossly integrated that America had so many extra vaccines than required that after witnessing growing global outrage, it decided to export. Such are the vaccine woes that haunt the world healthcare system. But the most immediate, crucial reason that might actually lead to vaccine inequality and increased healthcare crisis is the delayed vaccination timelines in various developing nations. It is to be noted that a threat of virus anywhere is a threat to the world altogether. In this detestable scenario, the developing economies will bear the brunt and losses due to the uneven and late rollout of vaccines.

Now as per EIU predictions, countries that are effectively unable to inoculate at least 60% of their population have much too loose. This goal needs to be achieved by mid-2022 or there can be a threat of a $2.4 trillion loss. This is especially true for countries like India which have a very slow pace of vaccination and large populations to vaccinate.

Why vaccination is crucial?

It is to be noted that the only way to mitigate the effects of the virulent nature of the virus is the robust pace of vaccination. this is due to the fact that vaccination will lead to the lower spread of the virus in the economy which will consequently lead to lower lockdowns and restrictions on the mobility of the public. Since mobility will not be restricted, demand and investment in the economy will be on the rise, and the production in the economy will resume. This will invariably protect the countries from losing billions and trillions of dollars which they will lose if restrictions to control the virulent nature of the virus are imposed.

But given the lower vaccine diplomatic standing of the emerging nations on the world forum has rendered them powerless at the alter of rich vaccine diplomacy. Thus, given such detestable attributes of the same, the emerging, underdeveloped economies will effectively shoulder around two-thirds of these economic losses. In addition to the economic losses, nations have many human resources to lose. This will effectively delay the developing economies’ rise to power and the economic convergence with the more affluent, richer developed countries. 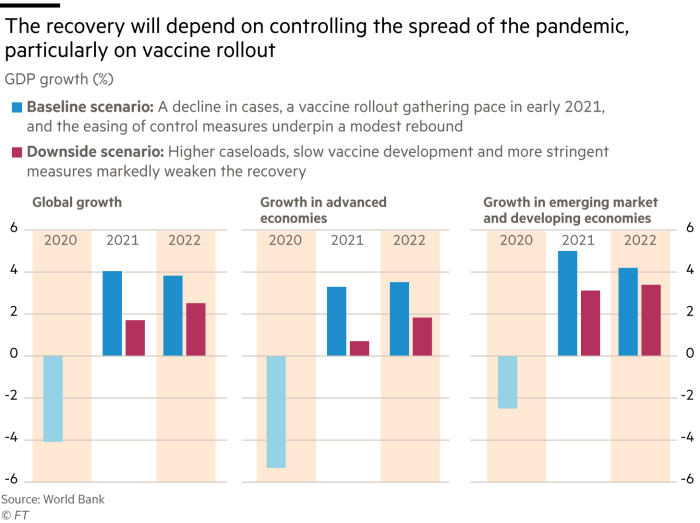 In absolute terms, Asia has been projected to be the most severely affected continent. Its losses can reach up to $1.7 trillion, which can be a whopping price to pay for nations that are already reeling under the credit crunch. This will also mean that the Asian continent is suffering from the threat of losing 1.3% of the region’s forecasted GDP. Similarly, sub-Saharan Africa has been projected to lose around at least 3 percent of its forecasted GDP if the vaccination does not pick up the pace soon enough.

Though the aforementioned estimates might come across as striking these estimates fail to measure the qualitative and anon economic impact on the economy in the long run. The healthcare sector, the education sector, growing income, and gender disparity are all excluded from the economic parameter. Thus, the effects of the pandemic noting that the pandemic’s effect on education was not taken into account in this forecast.

The increase in Rich-Poor disparity

It is no news that currently, wealthy nations are at a high rate inoculating their population and are slowly opening up their economy. In fact, the vaccination pace is fast that now booster shots are being administered to the population. In contrast, the poorer countries are effectively lagging drastically behind in the unfortunate race to get vaccinated. It is quite disheartening, that vaccination drives in various countries have to be a race and not cooperation. This effectively shows that the global economy needs robust and strategic economic diplomacy and cooperation.

But according to reports, vaccine inequity has occurred majorly due to technical shortages like global shortage of production capacity and logistic difficulties in storing and transporting the vaccines. On the other hand, vaccine hesitancy especially in western countries has led to havoc and slower vaccination drive around the world.

But the major inequality was seen when various developing countries had to beseech for funds from the affluent nations as they could not afford the vaccines for their residents.

It is to be noted that given all the aforementioned reasons, the poorer countries are actually quite unlikely to recover from the pandemic fast or faster than the richer countries. This will in itself have various economic repercussions for these countries as a tourist will most likely avoid the places or destinations with large unvaccinated populations. This will be due to larger safety concerns as no matter how exotic a location might be but safety overrules emotions. while political resentment will likely grow, the report said. Additionally, it is to be noted that herd community is not an option for the developing nations as the health infrastructure of such nations is usually not well built. Therefore, faster vaccination is the only crucial key for revival. On the other hand, vaccination will effectively reduce severe cases and thus hospitalizations and deaths in society.

Such a humanitarian crisis can also be attributed to the political ineffectiveness in the economy that had led the political leaders and parties in developing nations to effectively respond to the crisis in the short-term scenario.