The first thought that crosses our minds when we think of Air India, is the majestic Maharaja greeting us in his royal attire. In the words of Bobby Kooka, the person who came up with the idea of the Maharaja almost 75 years ago, “People can call him the Maharaja for the need of a greater illustration. But the Maharaja’s blood is not blue. He may appear as royalty, but he isn’t royal. He is skilled enough to entertain the Queen of England and splitting a beer with her butler. He is a man of many characters: lover boy, sumo wrestler, pavement artist, a vendor of naughty postcards, Capuchin monk, Arab merchant…” 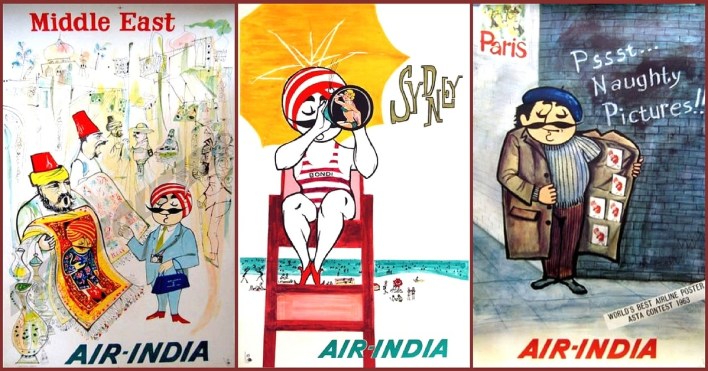 The Maharaja is one of India’s most identifiable and adored mascots, the plump figure in a royal outfit has occupied a delicate place in the hearts of Indians for decades. The mascot which has made the national carrier stand out from its peers for years, the cheerful Maharaja first came in front of public eyes on an in-flight memo pad in the 1940s. The mascot was the brainchild of SK (Bobby) Kooka, he was Air India’s Commercial Director back then and the idea was sketched by Umesh Rao, an artist at J Walter Thompson in Mumbai.

India was known as the “Land of Maharajas” and Air India was the only international flight. The national carrier took passengers to Prague, Zurich, Cairo, Damascus and Istanbul. Kooka’s idea was to create an image for Air India’s notepad that would resemble chivalrous, royal and stylish living. These thoughts made the Maharaja’s creators give him a distinguished appearance, heavy coal-black moustache, hooked nose and a typical Indian turban. In due course, the majestic figure gained popularity and became Air India’s mascot for its sales, advertising and marketing activities.

For the next few years, the majestic mascot was insightfully used by the country’s national airline to unveil new flight routes. His humorous pranks and eccentric jokes made Air India advertise its services with fine humour and unique flamboyance. For example, one of the banners from Air India’s “retro collection” displays the Maharaja as a Russian Kalinka dancer to promote its flight to Moscow. Another banner displays him on a speedboat happily surfing in Australia.

Similarly, another poster shows him being taken away as prey, both the hands and feet tied, by two huge lions in the forests of Nairobi. The Maharaja made an appearance in a variety of attires, but his basic trademark luxuriant moustache and his chubby physique remained constant. But, in 2017 the Maharaja lost few pounds and switched his regal garb with denim jeans, a low-slung satchel and trainers to match himself with the modern era. The originality of Air India in advertising, marketing and publicity made it win several national and international awards and recognition.

See also  From Local To Global Through Vocal: What Modi Actually Mean

At a point in time, it was quite fascinating that the Maharaja’s royal overtone set off a controversy with the politicians demonstrating hesitancy about using such an image to represent a country with socialist ambitions. This resulted in Air India biding the Maharaja farewell in 1989. But it was too late, the Maharaja had already charmed millions of hearts and they demanded their favourite mascot to be brought back.

As a result, Air India welcomed back the Maharaja with open arms. Just like all popular and great men, the Maharaja has had its critics. But the critics are outnumbered by the love expressed by the millions of travellers all over the world. Among the Maharaja’s fans, many of them consider the unique mascot is more like a real person, almost like a bosom friend who extends his hospitality and affection, even in the remotest corners of the earth. But the royal glory of the Maharaja, brought by Air India started fading. Now the mascot’s kingdom is in ruins.

As the auction of Air India’s properties starts from July 8, the passengers who once enjoyed the full glory of the national air carrier laments the loss. The Government’s attempt to divest 76 per cent of Air India’s share in October 2018 was a failure. This year, the Modi government is confident in completing the divestment procedure. But whatever the result of the divestment procedure is, the Maharaja has some unique things in its 75 years of existence. The national airline has a remarkable collection of arts, has invested in Air Mauritius and it is an owner of Centaur hotels.

Starting from the beginning, JRD Tata owns the credit for setting up the original Air India. He inaugurated Air India international at the time when familiar international airlines like Imperial Airways, KLM and Air France were ruling the aviation industry on the India-United Kingdom route. In 1948, flying in Air India International’s colours, a pristine Lockhead Constellation L-749 completed its Mumbai-Geneva-London flight.

Lockhead Constellation is a four-engine, propeller-driven aircraft that was built by Lockhead Corporation in the mid-1940s. This flight was the starting of Air India’s many more International flight routes and new aircraft that the national air career introduced in its fleet through several years. It wore the crown of becoming the first aviation company in Asia to procure and fly the Boeing 707.

The Indian Airline Corporation was operating more than 100 flights per day by 1966. The flight path extended over 36,000 km and the airline showed off its success in carrying one million passengers yearly. This success made Air India one of the largest domestic airlines in the globe. In comparison to Indian Airlines which flew mainly on domestic lines, Air India took flight extensively on international routes. In 2007, the two branches were merged and the freshly created airline’s name was continued as Air India.

Indian Airlines witnessed a growth and developed strength by connecting several parts of the country. The aviation industry witnessed a time when Indian Airlines came up with a commercial that claimed in every three minutes Air India’s aircraft was either taking off or landing in 70 airports.

During its peak of success, Indian Airlines launched an idea of a metro shuttle in 1999. The metro shuttle was an hourly departure between Mumbai and Delhi. The concept was launched when most of the people were of the thought that there was no market for such a huge number of flights. After eight years, Indian Airlines became nothing but a sweet memory in the minds of the passengers.

For Air India, the case was different. Despite its colossal losses the Maharaja continued to spread its wings and fly across continents and continued connecting places throughout the world. Even today, the strength of Maharaja is reflected by the slots it has at popular international airports like London and New York.

During the global pandemic, the Maharaja successfully caught the attention of the public once again. In late January and early February, the Maharaja flew to Wuhan in China to rescue and bring back its countrymen from neighbouring nations from the centre of the pandemic. The Maharaja has been actively involved in the government’s Vande Bharat Mission and has flown to more than 54 nations, which included its first time flying to New Zealand.

In the name of Hindu Rashtra, what all costs Indians are paying: the worst religious intolerance