According to Haryana’s new law, the government of Haryana, earlier this week, has made it compulsory for private sector companies to reserve about 75% of jobs with a monthly salary going up to Rs 50,000 for the local people of the state. This has given rise to a lot of criticism that is now coming their way. The common one being the dilemma of whether the government will now force the private companies to comply with its reservation policy at times of providing jobs. Constitution already guarantees reservation for public sector employment, extending it to the private sector is a new step that is taken by the government of Haryana.

What Comes Under The Law?
According to the Haryana State Employment of Local Candidates Bill, 2020, the private companies in Haryana are required to keep aside 75% of the jobs for the domiciles of Haryana and the salary should be up to Rs. 50,000. The assembly passed this bill in November 2020. Hence, now the bill has become a law and applies to every private sector company, society, firm, trust, or anyone who will be employing 10 or more people.
The government of Andhra Pradesh had also passed a law along similar lines in July 2019 which was later on challenged in court. Prima facie had been made by the Andhra Pradesh High court at that time in terms of saying that the law might be considered unconstitutional. 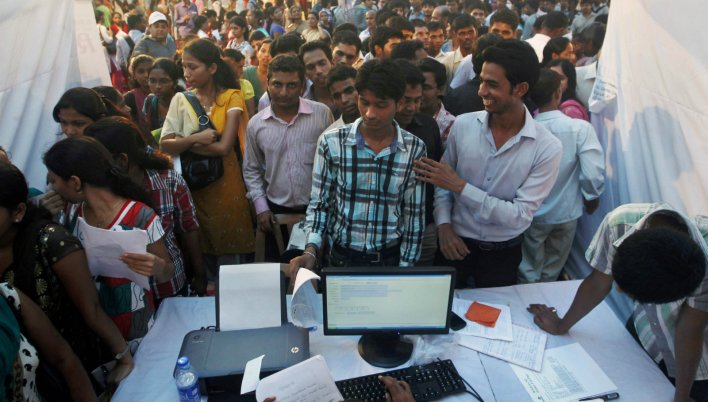 What Are The Issues In Such Laws?
One issue that has always been there is the domicile reservation in jobs. The domicile quota for education is still acceptable in the country but when it comes to public employment, the court has been reluctant to it. Last year when the Madhya Pradesh government decided to put aside all the government jobs for the “children of the state”, questions regarding violating the fundamental right to equality of citizens were raised.
The next issue concerns the fact that whether the private sector will be forced to abide by the employment reservations law passed by the government of Haryana.
Why Is The Government Reluctant towards Employment Reservation Laws Based On Domicile?
When the constitution of India was drafted, the central idea that it had in mind was the idea of the universality of Indian citizenship. And the liberty to be able to move freely to any part of the country should not be restricted by any state public employment law.
Supreme Court On Reservation Of Jobs For Domiciles
The Supreme Court had been reluctant against reservation based on any person’s residence or place of birth. The issue about legislation for “sons of the soil” was discussed in 1984 and the court declared that policies like that would be unconstitutional, however, the court did not completely rule over it. In 1995 though, ruling in Sunanda Reddy v/s State of Andhra Pradesh, the court approved of the policy which gave about 5% extra importance to students who had Telugu as a medium of instruction in their studies. In 2002, the Rajasthan state selection board initiated a preferential policy, in the appointment of government teachers, to those applicants who belonged to the rural areas of the district or district concerned. The court declined this initiative and completely invalidated it. In 2019, the High Court of Allahabad declined the preferential recruitment of women who were the residents of the UP alone.
The Reason Why The Government Bring In Such Laws
The government has been all about reserving job positions in the private sector and one of the reasons for this is that the jobs provided by the public sector are far less so to protect the fundamental right to equality of the citizen, the government decided to extend the job reservation in the private sector as well.
Another reason is that the private industries have been using public infrastructure in many ways like gaining control on credits from public banks while accessing land with subsidized allotment, tax relaxations, and many other benefits. This makes the state legitimate in terms of asking the private companies to comply with the law policies.
Current Scenario After The Law Became Applicable In Haryana
Data coming from the Centre for Monitoring Indian Economy show that the unemployment rate in Haryana has remained at an all-time high since August 2017. In April 2020, about four out of 10 people looking for a job were unemployed. This clearly explains the situation of employment in Haryana.
Now to add to this, even as the lockdown is being removed and the markets and economy are opening up, the unemployment rate has continued to remain at an all-time high and is rising day by day.
People have been also saying that this rule put forth by the government is nothing but a populist and a political agenda and not just that, the rule was supposed to induce high rates of employment in the state whereas it is doing exactly the opposite.
Which Companies Come Under This Law?
According to PRS legislative, the bill will be applied to:
1. Every private sector company, society, firm, and trust.
2. Any person employing 10 or more people.
Who Is To Benefit From The Bill?
Domiciles or locals will benefit the most and to be called as a domicile of Haryana, the person should have taken birth in Haryana or should have lived there for at least 15 years of his/her life.
Also, the local candidate can be from any district of the state, however, 10% of the candidate must come from the district in which the company is located in.