The apex court of the country aka the Supreme Court dismissed petitions which were to stay the sale of fresh electoral bonds, on Friday ahead of Assembly elections being organized in multiple regions of the country. The election process in the near future is due in West Bengal, Kerala, Assam, Tamil Nadu, and Puducherry. The court is, however, of the view that there is no valid rationalized argument to stay the current sale of these bonds. Albeit, there is another pending challenge in the supreme court filed in 2017 against the electoral bonds scheme.
What is the 2017 constitutional challenge pending in the supreme court?
The petitioner is the Association for Democratic Reforms. It is a nonprofit organization which works for transparency and accountability in electoral matters. The group also works for multiple common social causes.
The petition challenged the constitutionality of the electoral bonds scheme. Moreover, the petition also wanted the supreme court to declare all political parties as public offices. Doing this, would bring the political party offices under the ambit of the Right to Information Act (RTI). In that case, the parties would also be required to disclose their financial accounts, that is, their income and expenditure.
The plea had been admitted by the court and has also invited responses from the Election Commission of India (EC) as well as the government but no further hearing has been conducted yet.
What are electoral bonds that are being talked about?
Electoral bonds are financial interest-free bearer instruments issued in multiples of Rs 1,000, Rs 10,000, Rs 1 lakh, Rs 10 lakh, and Rs 1 crore. The only bank authorized to sell them is State bank of India (SBI). They were announced in the Union Budget of 2017 and are generally used to donate money to political parties anonymously. The concept of electoral bonds was first announced by the then Finance Minister Arun Jaitley in his 2017 Budget speech.
Its most important characteristic is anonymity as a bearer instrument does not list down any details about the payee or buyer. Generally, the political party is holder of the instrument and is considered its owner. A political party which has received bonds by its donors can encash the bonds. The encashment can be done through the party’s verified account within 15 days. However, the number of bonds that can be purchased by an individual or company are limitless. On non-encashment of a bond during the period of 15 days, the amount is deposited into the Prime Minister’s Relief Fund by the SBI.
Between March 2018 and January 2021, as many as 12,924 electoral bonds have been sold in 15 phases. These were valued at Rs 6534.78 crores.
The main purpose of giving birth to electoral bonds was to establish a way for many companies to make anonymous donations to their preferred political parties. 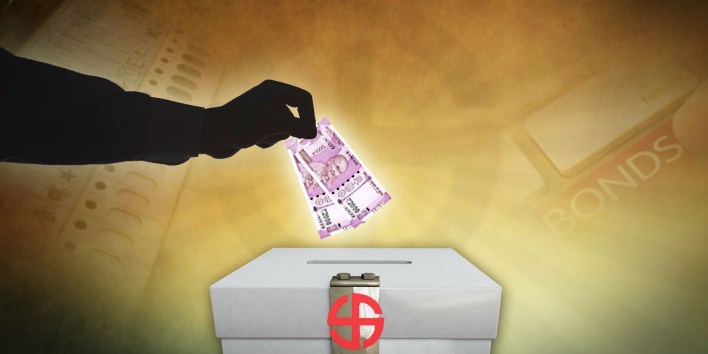 Why have electoral bonds been challenged in the court?
The main point of criticism and contention is the anonymity factor imbibed in the electoral bond donation process.
With the amendment to the Finance Act 2017, the Central government has given an exemption to the political parties. There are no more mandates to disclose details about the donations received through electoral bonds to the Election Commission every year. This is problematic because the voters would have no information about which political party has been funded by which individual, company, or organization has funded, and to what extent.
Before the amendment was made and electoral bonds were introduced, it was compulsory for the parties to disclose information regarding all the donors who have made contributions over Rs 20,000. This infringes the citizen’s ‘Right to Know’ and becomes a hindrance in the rights guaranteed to an Indian citizen under the “Right to Information Act”. The increases the unaccountability of the political parties.
The ADR claims that electoral bonds only blind the citizens by providing no details to them. This is because the principle of anonymity does not apply to the government because it can get the required information about the donor details by accessing the data from the State Bank of India (SBI). Thus, the only people who do not know about these donation sources are the taxpayers and voters of the country. This entire process becomes unfair especially when we bring into highlight the fact that the payment of printing of these bonds and the commission paid to the State bank of India for facilitating the sale and purchase of the bonds is done from the money paid by the taxpayers to the central government.
The electoral bonds have become the most attractive route for the donors to extend support to their favorite political party simply because of the virtue of the anonymity they offer.
This can be brought into salience with the fact that electoral bonds were the source of more than half the total income of national parties and the regional parties for the financial year 2018-19 with the Prime Minister Narendra Modi led Bhartiya Janata Party being the biggest beneficiary of this system. BJP has received as much as Rs 1,660.89 crore via electoral bonds in 2017-18 and 2018-19. The amount received by the party is nearly 60.17% of the total Rs 2,760.20 crore received by parties during the same period.
What does the Election Committee think about it?
In May 2017, the Election Committee made a submission to the Standing Committee on Personnel, Public Grievances, Law and Justice against the amendments pushed forward in the Representation of the People Act. These are the same amendments that make it okay for the political parties to not disclose their donations raised through electoral bonds. The committee also asked the government to “reconsider” and “modify” the changes introduced by the above stated amendment in the form of a letter addressed to the Law Ministry in the same month.
The EC wrote that when the donations received through electoral bonds are not disclosed or reported, it becomes impossible to ascertain if the political party under account has violated the provisions under Section 29(b) of the RP Act. This section prohibits receival of donations from foreign sources and government companies.

China unleashed the dragon once again: imposes duties of up to 218% on Australian wine for 5 years, Australia threatens WTO action; China is increasingly going on the offensive and being isolated even as Australia and America join hands