In the last two months, conversations about police brutality have increased manifolds. Be it in India or the world, the difficult time of pandemic has brought up the vilest cases of police brutality to the fore. Although the incidents of police brutality are nothing new or novel to be talking about, the debate gained traction in light of the George Floyd murder in the United States by the officers-in-duty of the Minneapolis Police Department and the resurgence of #BlackLivesMatter.

About the police brutality

Back home in India, the last four months in the lockdown have significantly seen an increase in police violence, under the blanket of enforcing the State orders. Some of the images and the videos that went viral on social media showcased horrendous acts of violence as police lathi-charged heavily on the migrants, poor, and marginalized, trying to make sense of the harsh, ill-thought and ill-managed rules of the country-wide lockdown.

The question here lies, how one draws a line between “justified enforcement” of the law by the police and straight-up abuse of power? In addition to that, one may ask why did India not rise in protest against the alleged custodial murder of Jayaraj and Fenix in Tamil Nadu, that happened at the beginning of this month? One also may be aware that this recent case is not the only case of police brutality that gained national and international attention.

The Delhi Pogrom, the Citizenship Amendment Act protests all over the country, JNU and Jamia violence are one of the most recent memories that come to forth as the horrendous crackdown of police that went on a murderous rage to fulfill the authoritarian intentions of the State. Herein, the role of media as the fourth pillar of democracy can be questioned. What was the narrative that was build up and fed to the masses? Some of these mainstream national and regional based media have a large nationwide following are looked up as the source of news and rational reporting. Therefore, it becomes pertinent that their role is examined.

The times of the pandemic provides a good analysis of the nexus between the police, media, and the state. The media is enmeshed with the police, and hence with the state. It has been a subject of numerous studies and research all around the world about the role of mass media in formulating public opinion and policies.

Media is envisaged as the transparent, accountable, and the strongest estate of democracy, to facilitate the expansion of the public sphere wherein the public involves itself in the debates and discussions for the healthy functioning of the democracy. 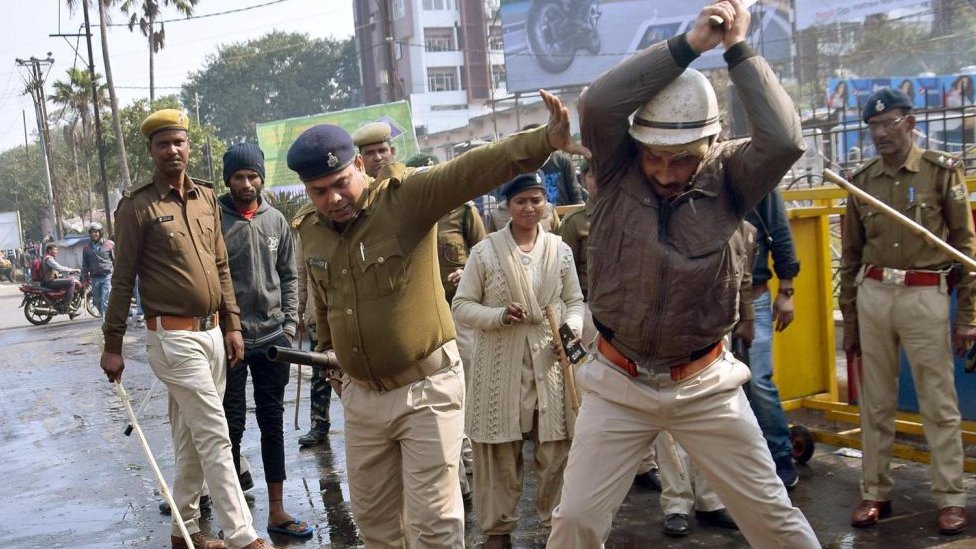 While it all looks good in the paper, the reality is heavily skewed. There are two extreme sides of the picture: the one side where the mass media is acting as the propagandist channel of the State, and the other side facing a crackdown and repercussions for doing the reporting and uncovering the truth.

When the lockdown added to the “miseries of the migrants” and the poor, the reportage of the lack of state preparation, hunger, death, corruption, police violence became an act of “misconduct” towards the state. The journalists were hunted down and a lot of them had draconian consequences slapped on them. FIRs, arrests, physical and verbal assaults, show cause notices, have become the order of the day.

While the scope of the freedom of expression and speech is being limited day by day, in general, and especially with respect to the media, the other side that is broadcasted 24X7 in our television sets at home, the other side of the “mainstream” has a different story to tell.

A media which is obsessed with the “face”, by running stories and “reports” on the leader of the nation which has no press conference in his share to date, it is not that difficult to surmise the screen time that is given to the stories that matter.

The prime time slots on different news channels are rife with “debates” that follows the same pattern of hurling abuses and accusations that serves no informatory purpose. The homogenization of the news channels signifies a dangerous paradigm. All is lost in the cacophony, but the most dangerous is the erosion of the duty to ask questions.

There is a concrete relationship between the portrayal of police and crimes in media and the perception of the public that is formed. The mainstream media sets the agenda and accordingly conditions the mass opinion.

The criminal and the police reporting are sensationalized and dramatized in the mainstream, owing to it to the popular culture that has its colonial roots in the postcolonial state. The media successfully applauds the police as the “heroes” in some cases and instills the fear of the police in others. The situation of the pandemic has reinforced the above-mentioned notion in the minds of the public.

Through the selective dispersion of information and control and furthering the “official narrative”, the media acts hand in hand with the State. By already choosing to be on one side of the narrative, it eases the answerability that lies on the State in a time when the institutions and their integrity are already in jeopardy.

The police brutality is cheered and celebrated to satisfy the inherent sadistic nature of the commons itself. When the police rained down upon the poor, agency-less migrants with their batons, beatings, and thrashings, instead of cross-examining and challenging them in unison, the majority of the public chose to be silent or vehemently defending the powerful. It will be foolish to assume that the mainstream media, the so-called “voice of the people”, had no role to play in this.

The mainstream media amplifies the notion of police innocence, as officers “doing their duty”, and above us all. They are honored, deified as super-humans beyond any accountability. Not denying that police personnel is not facing difficult situations and pathetic conditions while on the duty, but that exactly is the reason the halo needs to be removed. The need for police reforms is more urgent than ever. While the protests in the U.S. are asking for “defunding the police” and taking the abolitionist stand, it is an impossible dream in our country.

Google is building a new private subsea cable between Europe and the U.S.

Indo-China War: Chinese Company Huawei to LAY OFF 50% of its Indian staff