From Nine Years To Nine Seconds: All You Need To Know About Noida Twin Tower Demolition

Following a Supreme Court ruling, the controversial Noida Twin Towers, constructed by the real estate firm Supertech Limited, will be demolished on August 28 in a matter of nine seconds.

The highest court ordered Supertech and the Noida authorities to demolish the project at their own expense, which is estimated to be Rs 20 crore, because it was built in violation of the UP Apartments Act 2010 and was illegal.

The Twin Towers T-16 and T-17, also known as Apex and Ceyane, are said to be the tallest buildings in India, surpassing the Qutub Minar, a famous landmark. They are located in Noida Sector 93A. The 7.5 lakh square foot Apex (32 stories) and Ceyane (29 stories) each contain more than 900 units that can house 1500 people.

Noida Tower Demolition: 5,000 Residents Will Suffer As A Result Of The Supertech Saga

The two Sector 93A societies, Emerald Court and ATS Village, which are the closest to the demolition site and would be most affected, have a combined population of over 5,000 people. Locals who live in the neighbourhood said that since a few weeks ago, the only topic of conversation for them had been the demolition.

More than 150 pets and all people must leave their homes by 7 am on Sunday, according to the officials in charge of organizing the evacuation, and the security staff of these communities must leave at the latest by 12 pm. Additionally, 2,700 automobiles from both societies will be taken away. 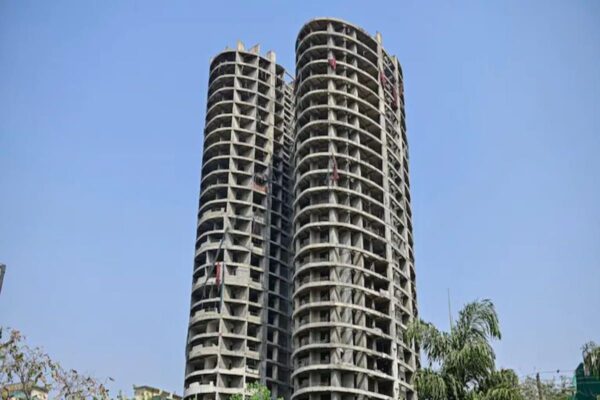 PTI reported that many residents are getting ready to move into the homes of their relatives in Delhi, Noida, Gurugram, and Ghaziabad, while some are pondering the kind offer. Additionally, several locals intend to travel to places like Rajasthan and Uttarakhand for their vacations.

Why the Twin Towers of Supertech are being destroyed?

At 2.30 p.m. on Sunday, the towers that were built illegally in Noida’s Sector 93A courtyard of the Emerald Court and are taller than the famous Qutub Minar in Delhi will be demolished.

The structures are being demolished in accordance with a Supreme Court ruling that determined them to be unconstitutional and improperly constructed.

The Noida authorities approved the “Supertech Emerald Court” housing society’s proposal in 2004, and the project was given 48,263 sq m of land. 14 buildings with nine floors each were initially part of the society’s layout.

Why has the demolition drawn so much attention?

The Supertech towers will reportedly become the tallest structures in India to be safely destroyed via implosion technology in accordance with a Supreme Court decision, according to those in charge of the razing project.

Residents of Sector 93A have reported feeling both excitement and “fear of the unknown” as a result of the razing. Many of them have expressed worries about the aftermath of the demolition.

The demolition of the Apex and Ceyane buildings is anticipated to produce a staggering 55,000 tonnes of rubble (35,000 cubic meters), ranking it as one of the major sources of waste from urban demolition in the region.

According to the project developers, a sizable portion of the debris would be stored in the towers’ basements, while the remainder would be transported outside of Noida and subjected to scientific processing.

This implies that approximately 1,200 to 1,300 “truckloads” of debris would need to be personally removed from the site. Dust clouds will also need to be eliminated.

Details About The Demolition

3,700 kg of explosives are put on each floor of the 40-story twin structures. As the two adjacent societies, Emerald Court and ATS Village, are only nine meters apart, their 5,000 residents have been instructed to leave the area by 7 am on August 28.

The Pollution Control Board has also deployed 10 anti-smog guns in an effort to reduce pollution. During the hours of destruction, traffic will be diverted, and there won’t be any vehicle movement from Noida to Greater Noida/Yamuna Expressway.

The demolition has been assigned to Mumbai-based Edifice Engineering in collaboration with South African company Jet Demolitions.

Noida Authority and Noida police would be present throughout the demolition. In case of a potential health emergency, the Noida Health Department has also been contacted. 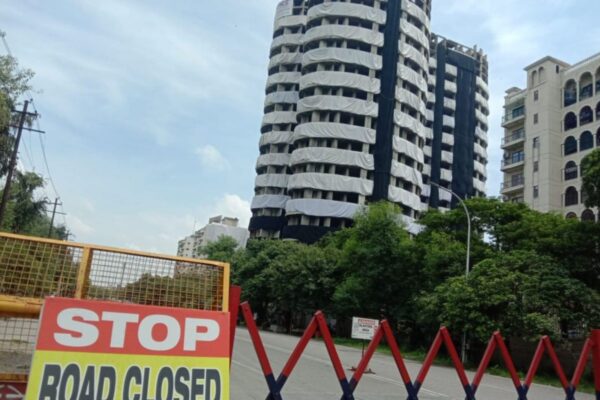 A housing society in Noida’s Sector 93A was to be built by Supertech Limited in accordance with the New Okhla Industrial Development Area Building Regulations and Directions, which were approved in November 2004. The realtor first assured the residents that 14 towers would be built nearby T-1, together with a garden area.

Supertech Limited updated its strategy later in 2006. The real estate company’s second design called for towers T-16 and T-17, which would have 24 to 40 stories and 650 apartments, respectively.

Without the previous buyers’ permission, the floor plan for the twin towers was once more altered in 2012 to accommodate 1500 inhabitants.

Real estate businesses are required by the UP Ownership of Flats Act, 1975, and the UP Apartment Acts, 2010, to obtain the approval of current residents or prior purchasers before beginning a new building.

The twin towers were allegedly built in contravention of open space and fire safety regulations, according to the Resident Welfare Association (RWA).

According to real estate standards and regulations, there should be a minimum of 16 meters (m) between any two adjacent buildings, and any structure that is 18 meters or taller must be 16 meters away from its neighbours.

For fire safety, this opening is essential. Although T-16 and T-17 are both over 18 meters tall, the spacing between them was only maintained at 9 meters, which is against fire safety regulations. Additionally, since the twin towers were built in a garden space area next to T-1, the distance between T-1 and T-17 was also restricted to a maximum of 9m.

The twin towers acquired a no objection certificate (NOC) from the Noida Authority for the construction of twin skyscrapers despite the flagrant violation of safety standards.

The Resident Welfare Association petitioned the Allahabad High Court in 2012, claiming that the twin towers’ construction was unlawful.

The Allahabad High Court took notice of the plea and ordered the government to demolish the twin tower at its own expense within four months in 2014. The high court also ordered Supertech Limited to give the homebuyers a refund with a 14% interest rate. 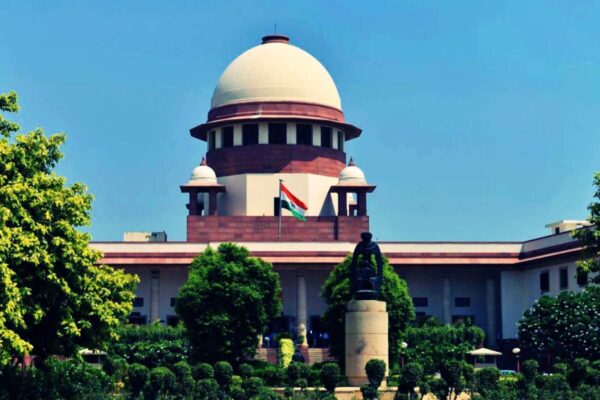 However, the realtor broke his promise. As a result, several purchasers returned to the supreme court and filed separate petitions. The Supreme Court afterwards appointed an amicus curiae.

In 2014, work on the twin towers was once more resumed. The Supreme Court provided two options in 2018: either abandon the project with full principal repayment and an interest rate of 14% or stay in the project and receive an annual return on investment of 10%. Supertech was ordered by the court to take the necessary action, but the realtor has not yet followed the court’s directive.

The Supreme Court ordered the twin towers’ removal in August of last year, citing the illegality of their construction. Additionally, the realtor was mandated by the court to pay the homebuyers back with a 12% interest rate.

Meanwhile, Supertech was unable to comply with the court’s judgment and compensate the homeowners because it declared bankruptcy in December 2021.

List of IFSC Code of SAMARTH SAHAKARI BANK LTD for 2022