Participation of women in the labour force of any country is very important for the growth of economy as well as for the development of the society. The increased participation leads to rise in the productivity level and therefore contributes in healthy growth of the economy. It also leads to the much needed change in the mentality of people, convincing them to accept the fact that gender can never determine capabilities. However, even after the long way that we’ve come through, the saddening truth is that India has one of the lowest female labour force participation rates in the whole world, and this should be a matter of great concern for the country. Let’ look a little deeper into this concern and figure out how and why we are at this disappointing position.

You remember the great milestone achieved by India in 2017, right? It earned the Achievement of world’s fastest growing major economy by maintaining over 7% growth rate since 2011. However, in 2017 India achieved another milestone, this time, though, a grimmer one. India recorded the lowest levels of female labour force participation and employment. There are numerous reasons behind this extremely low participation rate, but some of the most important of those are social norms, technological upgradation and the much lacking modernisation of mentality in the rural India, which has thus resulted in creating a gender gap in higher level education and skill training. The agricultural sector absorbed a large amount of women labour force but with upgradation of technology, eliminated the female labour force, simply pointing at the fact that women there have been looked as the helping hand and not the skilled labour on the fields. The level of female participation in tertiary sector rose from two percent in 1971 to only 30 percent in 2019, which, when compared to other countries is a significantly low number, especially for a country who has witnessed revolutionary growth in the sector.

Another noteworthy trend in the female labour force participation is the huge difference between the urban and rural female labour force participation. Rural women participate more than urban women as they are poverty stricken and have to work to manage their homes. They usually do menial and less paying jobs to sustain their lives. However, COVID has been and still is very unfair to them. During the first wave of COVID-19 pandemic when the world was suffering, these women suffered the most. Losing jobs and not having enough savings to sustain their lives during the pandemic made the lockdown tougher for them than any of us. According to reports, women around the globe lost nearly USD 800 billion in income during the pandemic year of 2020, which is equal to the combined GDP of 98 countries. Women lost nearly 64 million jobs in the year 2020, even without including the informal sector, and for a country like India where women form a huge part of labour in the informal sector, the losses have been much more tangible, both in terms of livelihood an lives. Note that job losses for women were about 5 percent while it was 3.9 percent for men around the globe, despite the pay gap and larger participation. Remind me how the pandemic was same for all again?

Data released by official sources delineates that before the COVID era, the share of rural women in workforce was 25% while the share of urban women was 8% of total labour force. However, the burden of this pandemic has fallen on the weak shoulders of these rural women. During the first month of national lockdown, March-April 2020, about 12 million rural women lost their jobs, which means that these women were robbed of their chance at a basic life amidst a pandemic with no adequate government support to aid during the emergency. The level of employment of rural women, however, started rising back to normal during July and even though things weren’t quite normal during the time in terms of safety and health, they were forced to work in order to sustain their lives and to help their families. Imagine working in such poor conditions while you are already fighting against a deadly virus. Scary, right? Well, these women had no other option. From March 2020 and March 2021, the percentage of employed rural women rose by 9.6% while it fell by 19.6% in the case of urban women. Oh wait, the struggle isn’t over yet. When the second wave of the COVID-19 virus started, it took jobs of 5.7 million rural women away with it. Nearly 80% of rural women were left jobless in April 2021 while 11% of rural women were jobless during April 2020. The story of inequality and gender bias is a long lost one and it’s painful to see how the vulnerable class has to bear the pain of any emergency the most, especially when the vulnerability comes from two sources- poverty and gender. The data presented couldn’t make any clearer that rural women have been victims of great suffering during the pandemic. 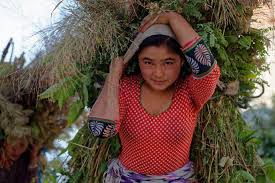 In case you’re wondering why the rural women are suffering more than anyone else, well, a thorough study into the case presents several major reasons. First and foremost was the unpaid care work which the rural women have constantly been doing during the second wave. According to reports, they spend nearly 5 hours doing unpaid care work while men only do it for an hour. The insufficient healthcare centres dragged these women to do unpaid work at the expense of their livelihood and basic needs. Hampered mobility is also another reason for their suffering. These rural women found it more difficult to travel during the second wave of the pandemic, hence resulting in loss of jobs, especially because most rural women are engaged in itinerant jobs. The lockdown which was imposed in every other state made it impossible for rural women to travel to small towns in order to work. Many fisherwomen or street vendors who travelled from their villages to nearby town to sell their produce were not able to do so due to the pandemic. Even though the MGNREGA scheme provided by the government served as a lifeline for these rural women as it helped them finding guaranteed work during the first wave, the lack of resources and government aid in the second one could not do much for them. It is also to be noted that the industries which are generally more women-intensive faced a shortage of demand during the pandemic, more so than other industries primarily because discretionary consumption has been on a crunch since the advance of the pandemic and insufficient support of the government through fiscal aid. As a result, these industries laid off a number of employees, a significant proportion of them being rural women. Not just that, as contrary to the first wave of the virus, the second wave has had a terrible impact on rural India, which is just the salt on the wound.

As the pandemic continues and the economic indicators stay at a crunch, the struggle for these women would still be a long road ahead. Data that came out after the first year of the pandemic painted a picture of increased inequalities between the rich and the poor, and the men and women, which unsurprisingly is only increasing with the second wave. It is imperative for the government to take commensurate steps to protect the interests of its vulnerable classes, which, in case of India, have not even been mentioned as yet.

With CLUBHOUSE stealing the show, all you need to know about this application.

US tries to kick up a stink by imposing punitive tax on India’s DST. India has every right to harness its market size