A senior advocate informs the SC that the ban has caused Muslim girls to stop attending school. According to the bench, the dropout rate among Muslim girl students should have been brought before the Karnataka HC.

The Karnataka government’s order, which effectively banned the use of hijab, would effectively kill female Muslim students, who would be “forced to opt out of secular education institutions and go back to madrasas, “On Wednesday, the objectors inside the hijab boycott scenario addressed the Supreme Court.

Senior advocate Huzefa Ahmadi advanced submissions on behalf of one of the petitioners, claiming that Muslim girls attending pre-university colleges, despite wearing hijabs, were able to break stereotypes.

Ahmadi claimed that the Karnataka High Court’s March decision upholding the hijab ban had resulted in discrimination against Muslim students, who had been forced to drop out of school. He also claimed that approximately 17,000 students did not write their exams due to the order because they were not permitted to enter school wearing hijabs.

However, the government order would compel them to return to theological institutions, which is contrary to our Constitution,” the senior counsel stated.

He read out student testimonials from an 8 September report prepared by the People’s Union for Civil Liberties (PUCL) on the impact of the HC judgment. Ahmadi argued before a bench of justices Hemant Gupta and Sudhanshu Dhulia that students wearing hijabs came from conservative families and had been wearing the headscarf for a long time.

“The decision caught them off guard and perplexed them.” What happens today if you take away what they regard as an essential religious practice? They will be forced to return to madrasas,” Ahmadi predicted, citing the PUCL report.

“An argument about Muslim girls’ education was never raised before the HC.”

The bench, hearing a batch of appeals against the Karnataka High Court decision, told Ahmadi that the argument that Muslim girls from conservative backgrounds were deprived of education was never raised before the HC.

Muslim female students have an undoubtedly high drop-out rate. “This ought to be brought before the High Court,” the judges informed Ahmadi.

They said they “don’t know how authentic it is,” referring to the report, which was released only months after the HC decision.

However, Ahmadi asserted that the decision’s immediate effect “can be felt on the surface.”

“Look at it logically,” the attorney said. “These students come from conservative families.”

When asked if Muslim girls were forced to wear hijab in order to attend secular schools, he said that their parents might tell them, “don’t go to school, go to madrasa.”

Earlier, in his opening arguments, Ahmadi claimed that the government order violated the concept of fraternity enshrined in the Constitution’s preamble. He stated, “The Indian Constitution promises equality, liberty, and fraternity.” “Fraternity is absolute, while liberty and equality are conditional.” Because the petitioners’ side has yet to conclude their arguments, the court will continue the hearing on Thursday. In response to the Karnataka High Court’s hijab ban, petitioners in the Supreme Court argue that “Indian courts are not equipped to judge the Quran.”

The petitioners in the hijab ban case criticized the Karnataka High Court’s 15 March decision, claiming that wearing a headscarf is not a required Islamic practice and that “judicial wisdom” would have advised the court not to enter a field in which it “lacks expertise.” The Supreme Court was hearing a slew of petitions challenging the Karnataka High Court’s upholding of a hijab ban imposed by a pre-university government college in Udupi, as well as the Karnataka government’s endorsement of the restriction on February 5.

The Karnataka High Court did something “highly objectionable,” according to senior advocate Yusuf Muchhala, who represented one of the petitioners in the Supreme Court, by pitting one interpretation of the Quran against another to determine the necessity of the hijab.

Scholars and interpreters may disagree, but I will wear the hijab if it is correct as a laywoman. It is not for the courts to say, “Follow one [interpreter] and ignore the other,” Muchhala told a bench of justices Hemant Gupta and Sudhanshu Dhulia.

In this case, the fourth day of hearings was held on Monday. The Supreme Court is hearing appeals against a Karnataka High Court decision that found no flaw in the state government’s order that effectively banned Muslim girls studying in pre-university colleges from wearing hijab.

Udupi College cited the state order to prevent Muslim students from wearing hijabs to the institution. Those who did not follow the uniform rules were barred from attending classes and taking exams. Despite widespread protests in the area, the government refused to rescind the order, prompting students to seek legal recourse.

The debate over reasonable constraints

Petitions were filed in the High Court claiming that wearing the hijab was a fundamental religious practice protected by the Constitution. There can be restrictions on constitutional rights, but they must be reasonable and proportionate to the goal, which the petitioners claimed was not the case in the current case.

However, the HC held in its interim order that wearing the hijab was not an essential religious practice among Muslims and that the government order was thus a reasonable restriction imposed on the students. In response to the HC’s decision, the petitioners in the case argued on Monday that the court should not have attempted to interpret the Quran. Last week, the counsel for one of the petitioners claimed that the high court’s interpretation of Quranic verses had become obsolete and bordered on “blasphemy.” According to Muchhala, Indian courts are not equipped to “judge the Quran.” “Even the average Indian Muslim reads Arabic meaninglessly,” the senior counsel added.

When the court informed Muchhala that the petitioners had brought the issue of essential religious practice to court, Muchhala responded that the court should have avoided it.”Hands off, we can’t look into that,” the Supreme Court should have said when it heard the question.

Later, senior advocate, Salman Khurshid argued on behalf of one of the petitioners that all cultural practices must be respected as part of “our commitment to diversity.” He argued that the right to choose one’s clothing is a component of dignity, liberty, and privacy.

He stated that it was not the petitioners’ contention that uniforms should be abolished, adding that the petitioners were asked to wear something in addition to the uniform.

Khurshid emphasized the importance of preserving India’s composite culture, which he argued was a part of the Constitution’s Fundamental Duties chapter. To bolster this point, he mentioned that visitors to the gurdwara, regardless of religion, immediately cover their heads.

Similarly, he added, when entering a mosque, one must cover their head, and this practice is unique to Indian tradition and culture.”In Islam, there is a debate about whether you need to cup your top while entering in a mosque,” Khurshid said.

He went on to say that even qualified public spaces like schools or pre-university government colleges are responsible for preserving the composite culture. He insisted that this was necessary to preserve India’s diversity.

Because the right to dress has been declared a fundamental right by the Supreme Court, only reasonable restrictions can be imposed on it, according to Kamat.

However, Kamat argued that the Karnataka government’s ban on hijab is not a reasonable restriction. According to him, a right can be limited under certain conditions outlined in the Constitution. Restriction on the right can be imposed for various reasons, including public morality, health, and state security, or if it is in the state’s best interests.

To further explain his point, Kamat cited the Supreme Court’s 2014 decision in the NALSA case, emphasizing that the “right to dress” is a fundamental right. In addition, the NALSA (National Legal Services Authority) decision recognized transgender people as the third gender, stating that the rights guaranteed to citizens under the Constitution would also apply to them. 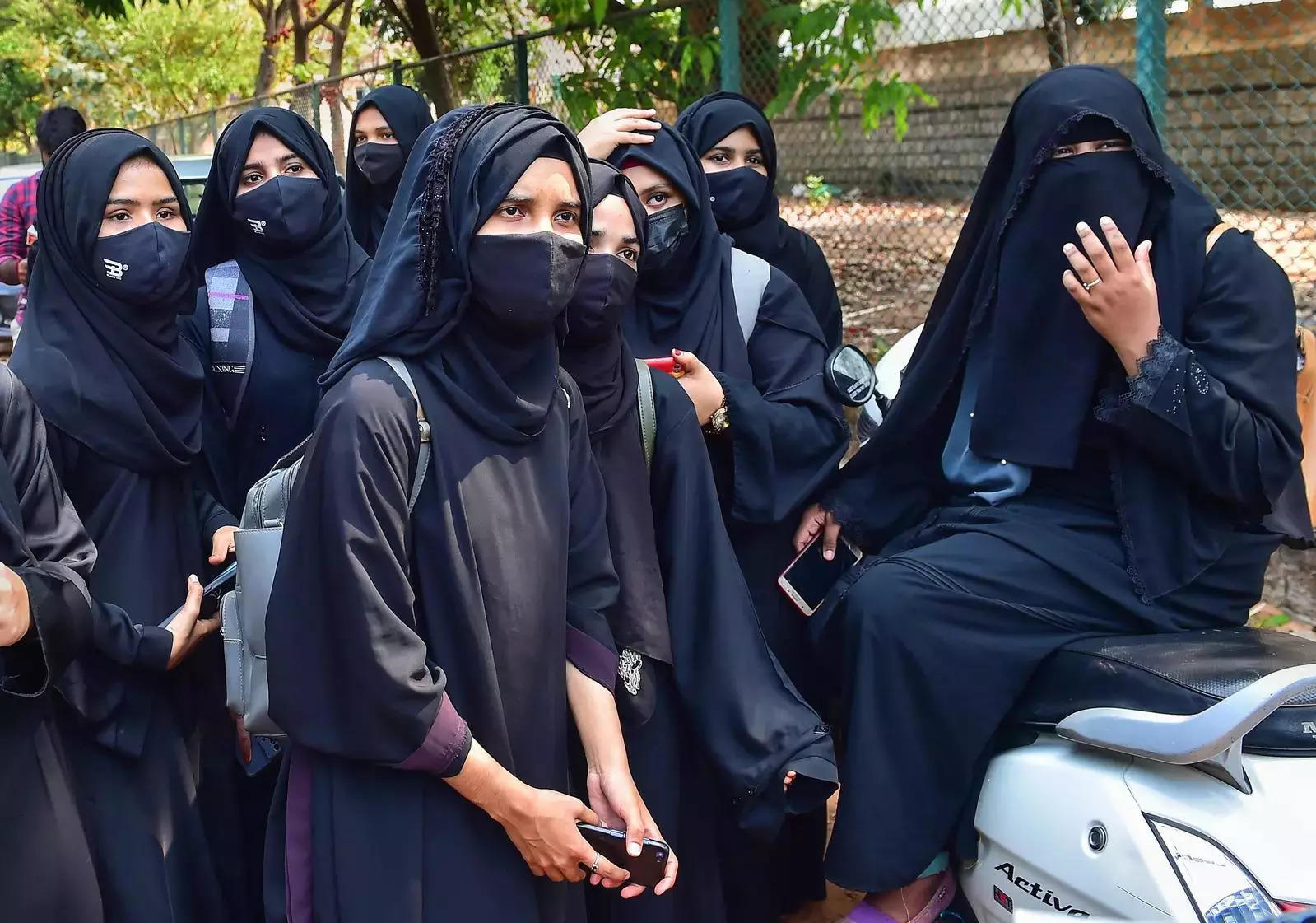 Kamat explained why the Karnataka government’s ban on wearing a hijab was an unreasonable restriction. According to Kamat, the NALSA decision held that rights conferred under Article 19 are basic rights recognized and guaranteed as natural rights inherent in the status of a free country’s citizen.

“Freedom of expression is a broad concept,” Kamat argued, adding that the judge held that a gender’s “self-identity” can be expressed through clothing. He contended that fundamental rights include the “right to dress.”

The bench concluded that the paragraph (part of the Supreme Court verdict) cited by Kamat was a general comment on the “inherent status of a citizen in general” and did not reach a conclusive conclusion that the “right to dress” is a “fundamental right.”

However, Kamat objected, claiming that his arguments were made in the context of a school uniform in which no one “undresses.”

“I’m not making a cliched, but rather a nuanced argument.” “If it (the right to dress) is an inherent part of my basic right,” Kamat argued, “then the question is (whether) wearing an additional dress is a part of Article 19 and if it can be restricted on grounds other than what the Constitution allows.” Says the petitioner. Kamat said, criticizing the Karnataka government order for violating several other constitutional rights in addition to Article 19. He said these were Articles 21 and 25, which guarantee personal liberty and religious freedom, respectively.

Despite Being Ranked As The World's Second-Richest Person, Adani's Debt Is Continuously Rising Instead Of Reducing. Why Is He Not Repaying The Loans?