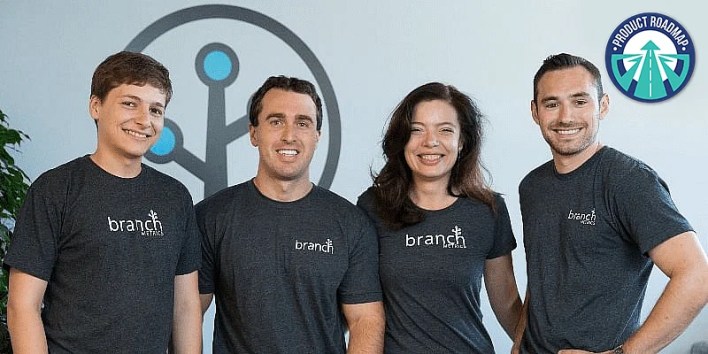 In 2014, when Alex Austin, Mada Seghete, Mike Molinet, and Dmitri Gaskin were building their photobook printing app called Kindred, they stumbled upon a roadblock that had tripped many other tech players —growth and discovery.
The four founders were frustrated by the number of obstacles app stores threw their way on user acquisition, but, in keeping with their entrepreneurial spirit, decided to solve the problem in-house by building a proprietary platform.
At first, the tech was restricted to Kindred since that was the group’s primary product. But after talking to their friends at Zynga and Trip.com, Alex and Mada learned that almost all other tech platforms faced similar problems. For example, the content sharing mechanisms that had made Zynga so successful on Facebook did not work on mobile because the company did not have any user acquisition tools.

That led to them thinking of Branch as an independent product.

“As we had started working on something to solve our own problem of linking to build content-sharing and a referral programme, the prototype didn’t take that long. Our first customer was an ecommerce app that needed the tool to build a content-sharing and referral feature, and we went to their office and helped build the feature using Branch alongside their team for a few days,” Alex told YourStory in an interview.

Founded in Palo Alto, Branch.io works as a mobile-linking platform that primarily focusses on helping mobile companies grow their businesses using deep links to measure where users come from. It also helps traditional marketing channels support the in-app experience, in addition to the traditional web experience.

Alex says the problem started with the introduction of mobile phones. While on a website, it is easy to have links that take users to a particular content platform, or understand where they come from, apps are more siloed, and there is no standard on how to link to an app in the same way one links to a website.

“For example, a user might create a link they share in an iOS app, but their friend clicks that link on a desktop, while another friend clicks it on an Android device, and they don’t have that specific app. Where does that link go if there’s no website? The App Stores? We make sure that all those users get to the right content, and we tell the app owner how their users got there. Think of us like the piping of mobile that connects everything together,” says Alex.

Branch’s proprietary technology is its machine-learned, privacy-friendly algorithm that matches a browser’s cookies with an advertiser ID across the tens of thousands of apps, and provides a much better match between someone clicking a link and someone opening an app on all channels and device types.

The founders understood that to build the kind of technology they had in mind, they needed good data scientists and engineers. So, they focussed on building the best-in-class engineering team, which wasn’t too much of a hassle for the founders, since Branch works with high traffic and large data sets.

“Combine the scale of technical challenges with the fact that we’re still a growing startup, and a single engineer can end up being responsible for building a hugely impactful system or product. It’s a pretty compelling proposition for most technical folks looking for ownership and a challenge,” says Alex.

The team first started with building the bare bones APIs and fundamental components. Then, they shopped its platform around and soon started working with early adopters and tech-savvy companies to build on the product’s existing capabilities.

Every time the team stumbled upon interesting customer applications, they productised and extrapolated the solutions they had worked out for that specific application, to the rest of the platform. Essentially, they learned and built Branch.io after its on-ground deployment, where they observed customers and looked for patterns of behaviours.

“Take our ‘Journeys web to app banner’ product for example. We saw customers using Branch links behind their homegrown banners and decided to make it better and easier for them — what if with just one line of code they could have a dynamic, customisable banner on their website? And what if they could show it depending on where users came from and how engaged they were,” says Alex.

One of the things the team realised – exceedingly early on – was that cross-platform measurement was tough, and that marketers did not have a good way to understand their return on investments.

The four founders started with the ‘link’ functionality to solve the issues that had been coming up in taking users to the right place inside an app, but they found that the broken, discontinuous experiences, walled gardens, and siloed measurement systems meant marketers couldn’t get a handle on the efficacy of their efforts.

For instance, a link to a promotion should take users to the app if they are on a phone and have the app, and to the website, if they were using their computer, says Alex. But even if creating links that direct a user to the app solved the problem for most companies, marketers would have had to use different analytics systems to track ROI on the website, versus the app.

“Understanding the need for a unified, cross-platform measurement. and attribution systems has been key for us as we started seeing how users used our links and helped us build something marketers had really needed for a while. We then leveraged our extremely accurate matching technology from the user experience world to solve this measurement problem in earnest,” says Alex.

What helped the startup build its credibility in its initial days was focussing on content-end education of the market. By educating and building a community of influencers around Branch.io, the startup says it was able to bag big customers.
At market inflexion points – like the shift from URI schemes to universal links and app links – Branch was looked at as a valuable resource by marketers and coders.

“We were there writing content, adapting, and many of our big customers like Pinterest and Airbnb started using us because we adapted and supported a deep linking standard faster than anyone, and educated the market around it,” says Alex.

Education and content is something Branch still invests a lot in as it scales. One of the ways it created a buzz about its educational courses was through a platform called mobilegrowth.com, which, to date, has hosted over 500 events and brought together experts who shared mobile growth tips with the community the startup has built over the years.

“Probably the biggest challenge we faced throughout the years of developing Branch was the incredibly rapid growth and scaling we had to do with the platform. When we first started, we were so naive in our technical choices and tremendously underestimated the demand for our service. The exponential growth of traffic completely caught us off guard,” says Alex.

The analytics market is expected to hit $13.9 billion by 2024, growing at a CAGR of 15 percent between 2019 and 2024, according to a MarketsandMarkets research report.

Branch’s competitors include Google’s Analytics 360, Appsflyer, Adjust, and SmartLook, among others. It counts Pinterest, Reddit, Dollar Shave Club, Sephora, Amazon Music, and Instacart as its clients.

The startup hinted at a ‘major innovation’ in the works right now, but did not disclose any details, saying only that it will be made public in the next few months.