The rupee has lost around 10% of its value against the US dollar since the year began, even touching the record-low level of 83 the dollar in October. However, since mid-November, the rupee has started to gain strength versus the dollar, reaching levels of Rs 80.50 to Rs 81 per dollar. Early in December, at the time of writing, the Indian rupee was trading at about Rs 82 to the dollar. 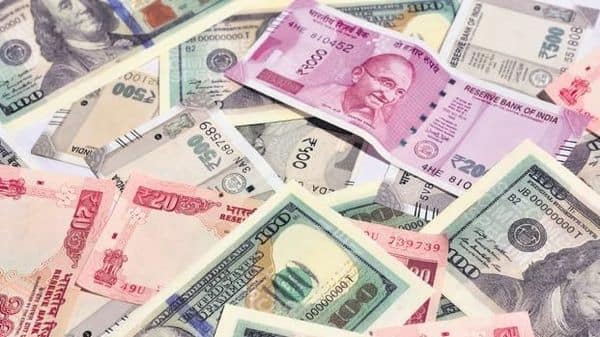 The Indian rupee’s worst year since 2013 was 2022. Unlike back then, when local reasons (high inflation) and foreign (taper tantrum) factors both played a role, global ones were the main driving force this time. As a result, after three years of modest declines of 2% on average versus the dollar and a few years of relative quiet, the local currency encountered a storm in 2022 and fell 10% to close at 82.74.

Finance Minister Nirmala Sitharaman is cited as responding that the dollar is growing rather than falling when questioned about it outside of a World Bank meeting. Although she was legally true, her comment sparked a hilarious joke storm on social media. The growth in the value of the dollar affects both developed and developing countries equally, not just India. India has done better than average for the sector. Since the start of the year, the rupee has lost roughly 10% of its value against the US dollar, while the British pound, the euro, the Japanese yen, and the Chinese yuan have all lost between 20% and 30% of their value.

Second, the surge in crude oil prices above $100 per barrel hurt the rupee. Following the commencement of the Russia-Ukraine war in February, the price of Brent Crude oil rose to a high of $140 per barrel in March. The cost of oil stayed over $100 until June.

The third and last factor that contributed to the devaluation of the rupee last year was a significant outflow of foreign currency from the nation. Last year, foreign portfolio investors (FPIs) net sold both the debt and stock markets. There was a net outflow of nearly $17 billion from the equities sector and $2 billion from the debt section. The likely causes of the withdrawals were the strong dollar, a flight to safety amid slowdown worries, and a relative overvaluation of Indian markets in comparison to those of other developing and established markets.

The new year 2023 may bring some solace to the Indian rupee after the turbulent year 2022. Most of the causes that led to the rupee weakening and dollar strength in 2022 are anticipated to continue in the first half of 2023 as well. The effect on the rupee might be less negative, though, as most of the risks have already been taken into account by the market. As a result, in the absence of any new event risk, the rupee may recover in the second half of 2023. In this section, we look at the reasons for and against the rupee in 2023.

It’s good to see crude oil prices decline and remain much below $100. This has recently resulted in a sizable reduction in the cost of the nation’s oil imports. On average, 30% of the nation’s overall imports are made up of crude oil. Due to a potential downturn in the global economy, crude oil prices are anticipated to stay lower in 2023. In contrast to a rise of 2.3 mb/d in 2022, the International Energy Agency (IEA) forecasts a decline in global oil consumption of 2023 will see an increase to 1.7 mb/d. According to the US Energy Information Administration (EIA), the average price of Brent Crude will be around $92 per barrel in 2023.

The goods trade imbalance has already decreased, from almost $30 billion in July to $24 billion in November of last year, thanks to the drop in oil prices below $100. In the next months, the trade imbalance might decrease considerably more, to roughly $20 billion, if the price of oil continues to decline.

In 2023, the current account deficit (CAD) may be reduced thanks to a reduction in the trade deficit brought on by low oil prices and a rise in invisible, such as exports of software services and private transfers. According to the most current information provided by the Reserve Bank of India, as of September 2022, our CAD was valued at $36.39 billion.

The foreign money flows have started to improve on the Capital Account front in recent months. Using statistics from the RBI, it can be shown that from $1.03 billion in June 2022 to $12.97 billion in September 2022, total foreign investments—which include both FDI and FPI—have grown. According to recent statistics from the National Securities Depository Limited (NSDL), foreign portfolio investors (FPIs) contributed a net inflow of $5.38 billion during the last two months of 2022.

On the strength of the better foreign money inflows, the Capital Account surplus, which dropped to $6.92 billion in September from about $28 billion in June last year, may rise. In 2022, the dollar was pushed mostly by the US Fed’s relentless rate rises. The US central bank will have increased interest rates from 0.00 to 0.25 percent to 4.25 to 4.5 percent by the end of 2022. This includes four hikes totaling 75 basis points (bps). The US Fed increased interest rates by 75 basis points in a single meeting for the first time since 1994.

The median prediction for the fund rate is expected to be 5.1% for 2023, according to the Fed’s most current economic projections, which were published in December 2022. Thus, a total rate increase of 75 basis points will take effect in 2023. After that, the Fed anticipates lowering the rates in 2024 and 2025 by 100 basis points each. Given that recent indicator of US inflation falling off suggest that the Fed will keep to its predictions, interest rates in the US might peak around 5–5.25% before beginning to decline. The graph makes it crystal obvious how the dollar index and Fed fund rates are related. Therefore, when the Fed raises rates by an additional 75 basis points, possibly in the first part of the year, the dollar index may rise before starting to fall. Charts show that the dollar index (105.15) has strong support right now, close to 102. In the following two quarters, a climb to 108-110 is anticipated. The dollar index might then decline once more, approaching 102, and drop below 100.

In 2023, a few things might work against the rupee. Below, we analyze these.

Fears of a recession

The projected recession in the US in 2023 and a slowdown in the global economy as a whole are two significant events that may not have been the market has not yet fully taken them into account. The International Monetary Fund (IMF) forecast that the world economy will contract to 2.7% in 2023 from its October 2022 prediction of a 3.2% increase.

In times of recession, the dollar often strengthens. For instance, the during the dotcom bust, the dollar index rose from around 108 in January 2001 to 121 in July 2001. The indicator increased during the 2008–2009 Great Recession, rising from a low of 71 to a peak of about 89. So, the dollar index may increase if the US has a recession in the first half of 2023.

Despite the possibility that India might also be affected by a recession, the historical evidence demonstrates that the country has had large inflows of foreign capital beginning amid the downturn and continuing far after it has ended. In 2008, $12 billion was lost from Indian stocks during the economic crisis of 2008–2009. But before the recession officially ended in June 2009, in March 2009, India began to see inflows in the stock market.

From March to December 2009, the FPIs invested a staggering $18 billion in Indian stocks. Therefore, if a recession occurs, it will hurt for a brief period. The market has become uneasy since China loosened its COVID regulations. The threat of a new pandemic wave has grown as a result. Even if the full impact is not yet obvious, it is important to keep in mind that during the initial wave of the virus spread, the markets recovered quickly and strongly. Therefore, assuming the same, any lasting effects from worries about the spread of a new wave will be minor.

Overall, we can anticipate that the dollar will continue to be strong in the first half of the year due to concerns about further rate rises and recessions. In the first half of 2023, this may keep the rupee under pressure. However, the second half of 2023 might see the dollar lose its luster. This can aid in the rupee’s recovery in the second half of 2023, along with improved macroeconomic conditions at home, such as decreasing trade and current account deficits as a result of reduced oil prices and bettering foreign money flows. Due to this, businesses that rely more on imported goods and have debts denominated in dollars may experience pressure over the first half of the year. Unless there is an unanticipated global shock, these pressures may lessen during the year. On the other hand, while currency depreciation, as long as it continues, should ideally be positive, this may be counteracted by the downturn in developed economies, which might have an impact on their industry.

China responds to Japan and South Korea on COVID curbs

Beginning of the year in the Indian IT sector bears similarities to the Eurozone Crisis of 2012.